How gut bacteria can make us ill 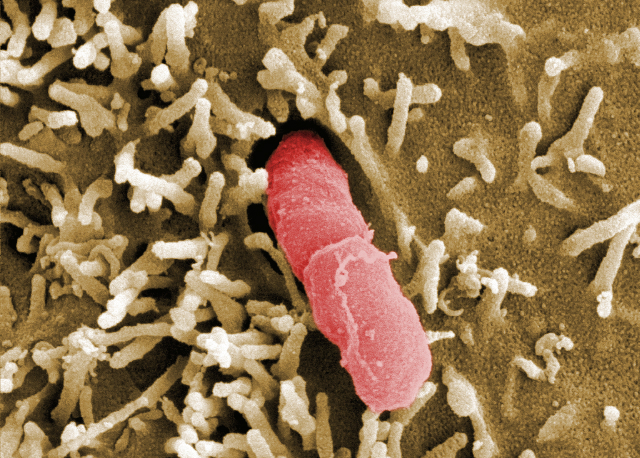 Yersiniae cause severe intestinal infections. Studies using Yersinia pseudotuberculosis as a model organism aim to elucidate the infection mechanisms of these bacteria. Scientists of the Helmholtz Centre for Infection Research (HZI) in Braunschweig recently were the first to conduct a so-called transcriptome study of this pathogen within infected lymphatic tissue of mammals, i.e. a simultaneous analysis of all active genes of the pathogen and its host.

They found: Yersiniae utilise various strategies to infect their host effectively. For example, they quickly adapt their metabolism, they compete for essential metal ions or inject toxins that damage the host cells. In response, the infected organism launches a strong immune response and tries to use a network of fibrin fibres to prevent the pathogens from spreading.

The scientists also investigated the infection process of the intestinal bacterial on a single-cell level using a systems biology approach. They were able to show that Yersiniae gain a survival advantage in the host tissue by forming a heterogeneous population. Genetic regulatory circuits are used to spontaneously create pre-adapted bacteria that might be better able to survive once a new situation arises in the host. A more detailed understanding of the interactions between host and pathogen will facilitate the identification of potential approaches to new medications in the future. The researchers just published their results in PLOS Pathogens and PNAS.

Gastrointestinal infections are some of the most common diseases throughout the world. They can be triggered, for example, by bacterial pathogens such as Yersiniae. These intestinal bacteria are named after Alexandre Yersin, a Swiss physician and bacteriologist, who discovered the cause of the much-feared plague, Yersinia pestis.

Nearly every human being gets infected by gastrointestinal pathogens at some point in life. In case of enteropathogenic Yersiniae this can cause severe intestinal infections that may be associated with inflammation of the lymph nodes of the gut and acute abdominal pain. The rod-shaped stool bacteria can be detected in a wide range of mammalians and are transmitted from animals to humans mainly through contaminated food items.

In order to colonise the intestines, Yersinia bacteria first need to bind to the surface of the intestinal mucosa. They then pass through the mucosa to penetrate into deeper tissues and get to the organs. “Different Yersinia bacteria use very similar mechanisms to infect their host cells and to control their spread in the host. Therefore, we use Yersinia pseudotuberculosis, one of the less hazardous members of the Yersinia family, as a model organism in our laboratory studies.

This pathogen shares many features with the cause of the plague, Yersinia pestis,” Prof Petra Dersch, HZI scientist and head of the “Molecular Infection Biology” department, explains. Colonising the host tissue is not enough though as the bacteria also need to win the fight against the host's immune system. “Thus far, this kind of study has only been done in vitro, i.e. in cell culture under laboratory conditions. Under these conditions, the host environment (elevated temperature, more nutrients) can be simulated, but not the influence of the immune system,” Dersch says.

To better understand the processes that go on during a Yersinia infection, the scientists need to look at the regulatory mechanisms that are being triggered when a pathogen infects a viable host. To this aim, Dersch and her team use the latest sequencing methods and comprehensive bio-computer scientific analyses of infected mice to elucidate the strategies and mechanisms by means of which the Yersinia pathogen infects its host, as well as the immune system's response to these processes. Dersch: “Our analysis of thousands of genes on transcriptome level draws an accurate map of a difficult struggle during the infection by the pathogen and the subsequent immune defence of the mouse.”

Yersinia-infected lymphatic mouse tissue that is closely associated with the intestine was used in the study. It is typical of Yersinia infections to colonize and multiply in lymphatic tissues with a very strong immune response. “We were able to show that the host responds to the early phase of the Yersinia infection through a massive influx of defence cells, the so-called neutrophils,” Dersch explains. In addition, the host attempts to produce certain coagulation factors to prevent the penetrating pathogen from spreading in the tissue and to immobilise it. “The coagulation factors allow the infected host to form a network of fibrin fibres around the pathogen, i.e. a so-called “clot”. This structure is also very important for the immune system, which recognises this cell clump as foreign and can remove it.”

The scientists also showed in their study that small regulatory RNA molecules play an important role in the infection. This is an important strategy of the bacteria, since it allows them to adapt certain metabolic processes in order to make new nutrient sources rapidly available – basically some form of evolutionary adaptation of the bacteria to their host. Because they compete with the host for certain metal ions, such as iron, manganese or zinc, both the bacteria and the host cells have special iron-binding molecules, by means of which they compete for the available iron to ensure their own survival. “Despite its strong immune response, the host can ultimately not win the fight against the bacterial infection,” says Petra Dersch. “The bacteria inject potent toxins, so-called effectors, into the host cells that kill the cells.”

In another experimental set-up, the HZI researchers and their colleagues from the Braunschweig Integrated Centre of Systems Biology (BRICS) of the Technische Universität Braunschweig, the University of Saarbrücken and the TU Munich studied Yersinia infections also on the level of individual bacterial cells. In this systems biological approach, it was evident again that the intestinal bacteria are quite capable of adapting to the environment that is prevalent in the lymphatic tissue of the host. “A complex genetic circuitry allows certain virulence genes to be “switched on” spontaneously in some Yersinia cells, but not in others. This variation may assure the survival of the pathogen in the host, since some bacteria may be better adapted to a different situation that may arise in the intestines in the future,” explains Aaron Nuss, who is a scientist in Petra Dersch's team. “We have not yet been able to exactly analyse the full scope of the variation of the pathogen populations and the possible benefits for the bacteria. Once we understand this better, we will be in a better position to control these pathogens.”

“The new experimental options involving the latest technology allow us to gain important insights into the interplay between pathogen and host during an infection in tissues and on the basis of the individual cell,” says Petra Dersch. “In the future, we will also be able to derive transcription profiles of other pathogens in order to detect still-unknown gene functions that are essential for the survival in different hosts. Moreover, this will improve the identification of potential targets for medications.”

The press release and a picture are available on our website: https://www.helmholtz-hzi.de/en/news_events/news/view/article/complete/how_gut_b…

The Helmholtz Centre for Infection Research:
Scientists at the Helmholtz Centre for Infection Research (HZI) investigate the mechanisms of infections and of the defences against infections. What is it that makes bacteria or viruses pathogenic? The answer to this question is expected to be key to the development of new medications and vaccines. http://www.helmholtz-hzi.de/en