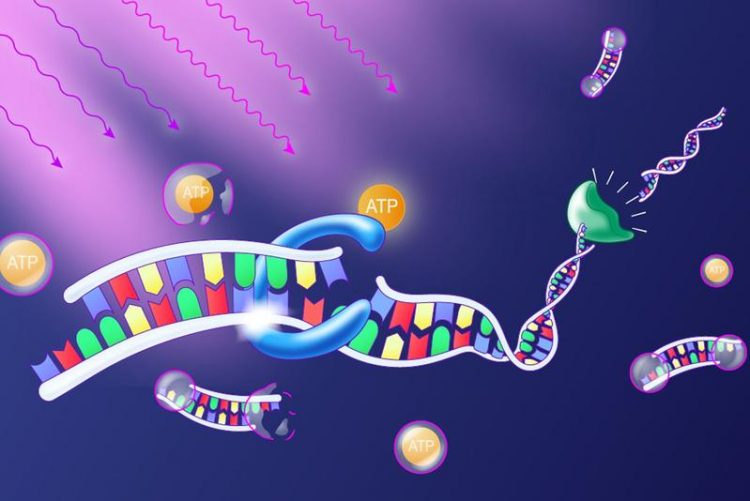 Exposure to light releases the molecule ATP. It provides the energy for an enzyme (blue) that joins DNA building blocks into a strand. Another enzyme (green) separates the strand at these binding sites so that the strand is dynamically lengthened and shortened. Illustration: Michal Rössler

A research team led by Prof. Dr. Andreas Walther and Prof. Dr. Henning Jessen from the Cluster of Excellence Living, Adaptive and Energy-autonomous Materials Systems (livMatS) and Jie Deng from the Institute of Macromolecular Chemistry at the University of Freiburg are the first to show how individual components of self-assembling DNA-based structures can be activated and controlled using light-reactive photo switches. The researchers have published their results in the journal Angewandte Chemie.

Using biological models such as microtubules the researchers are developing self-assembling structures. Microtubules are protein complexes that form a dynamic scaffolding structure in the cells of plants, animals and humans.

Their self-assembling structure means that microtubules are constantly forming and degrading at the same time. This allows the scaffolding to adapt easily to changing situations and to react quickly to stimuli by rearranging the building blocks. These processes are driven by a constant dissipation of energy, i.e. a conversion of energy, which the organism regulates via feedback mechanisms.

The structures of autonomously acting materials such as those developed by the scientists in the livMatS cluster of excellence should be similarly adaptable in the future. This can be achieved with systems, in which an energetic activation and deactivation take place causing the structural formation and degradation of building blocks.

In their work, the Freiburg researchers add the energy supplier adenosine triphosphate (ATP) to the DNA building blocks in such a system. The scientists have installed molecular photoswitches on one side of the ATP. These react to light by dropping when specifically irradiated and releasing the ATP as an effective fuel molecule for the system.

The control over the photoswitches is influenced by the wavelength of the light, the duration of the irradiation and the light intensity. The specific activation of ATP in turn triggers a process: an enzyme closes a bond that forms longer strands from the DNA monomers.

Another enzyme, which can recognize and cut DNA at certain positions, cleaves the binding sites again. This results in a simultaneous formation and degradation of the building blocks. During this process the individual DNA building blocks combine to form a polymer.

“Our long-term goal is to use the biological fuel ATP to develop synthetic materials that at least blur the line between living and dead matter,” explains Andreas Walther. “If we are able to use ATP as fuel and convert chemical energy into work, we can design the next generation of implant materials that can actively change and truly interact with the human body.”

Caption:
Exposure to light releases the molecule ATP. It provides the energy for an enzyme (blue) that joins DNA building blocks into a strand. Another enzyme (green) separates the strand at these binding sites so that the strand is dynamically lengthened and shortened.