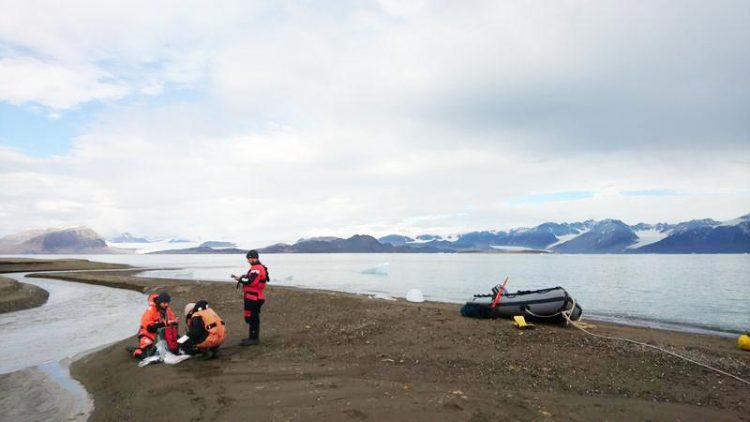 From left to right: Claudia Schmidt (HZG), Chantal Mears (HZG) and Torben Stichel (AWI) take water and sediment samples at the transition of the meltwater of the glacier "Midtre Lovénbreen" in Kongsfjord. AWI/Grit Steinhöfel

The aims of HZG’s research within ECOTIP are, on the one hand, to undertake expeditions in the Arctic so that the environment can be studied on site, while on the other, to model the ecosystem for improved forecasts and to ultimately facilitate decision making at the political and regulatory levels.

The Arctic Ocean and its adjacent seas are changing rapidly in response to rising temperatures, the melting sea ice and the combined effects of additional stress factors on the ecosystem, such as invasive species and pollution.

Such abrupt, sometimes irreversible, changes can create a sort of chain reaction of unforeseeable effects on the ecosystem as a whole. The Arctic marine region is very vulnerable to a number of “tipping points”, which could transform the system on an unprecedented scale.

At stake are two ecosystem components on which humans also depend: carbon sequestration, which plays a crucial role in the global climate system, and fisheries, which form the economic foundations of many arctic communities. “I’m very happy that we can be part of this societally relevant project,” says Dr Helmuth Thomas, head of the HZG’s Alkalinity department.

There are currently two HZG scientists on location at the AWIPEV Base research station on Spitsbergen. They will take samples in the coming weeks of glacial water, ice and fjord waters. Parameters such as pH values, carbon dioxide concentrations, particulates and metal concentrations will then be measured. The aim of the HZG activities is to recognise background changes. Helmuth Thomas explains, “With increasing temperatures, the glaciers are melting more quickly.

This means that more freshwater winds up in the fjords. If more pollutants or particulates are carried by the water from the glacier to the fjord then into the sea, the fjord could become more turbid, which could mean less phytoplankton and therefore less food for creatures larger in size, such as walruses.

It is, however, not only individual factors that play a role in these chains, but also what is known as multiple stressors that we are yet to understand: what impacts does the interaction of different factors have?“

There remains lack of sufficient information about the mechanisms, drivers, thresholds and impacts of the interrelated ecosystem effects. The ECOTIP project would like to close these gaps in knowledge through a unique cooperation of experts from different disciplines. Scientists from different fields, such as ecology, socio-economics, physical oceanography and palaeooceanography, are participating.

The ECOTIP project is enriched by continuous dialogue with policy makers, industry and local and indigenous communities in the Arctic. The aim is to obtain sound scientific insights that enable people to make decisions on adaptation and management strategies. Ultimately, sustainable utilization of the ecosystem for coming generations should be ensured.

“The Arctic seas are extremely vital for global climate as well as for local fisheries. We nevertheless know far too little about the impacts of climate change for the Arctic marine ecosystems and can therefore not predict how ecosystem services will change in the future. The ECOTIP project will generate numerous new insights in this area, knowledge from which local societies and the global community can equally benefit,” says Dr Marja Koski, coordinator of the ECOTIP project and professor at the National Institute for Aquatic Resources at the Technical University of Denmark.

Further expeditions to western and eastern Greenland as well as to the Barents Sea are planned for the coming years. “What I find particularly exciting is that in addition to analysing the environment on site, we will also develop an interactive online tool. With this tool, environmental factors such as copper content, pH value or water temperature and their subsequent effects can be presented and predicted individually and in combination.

The users can directly see what impact the changes could have on the ecosystem as a whole,” says chemist Helmuth Thomas. This will enable scientists to make better predictions for the future and develop early warning models and will also support policy makers in the decision-making process.

ECOTIP (Arctic biodiversity change and its consequences: Assessing, monitoring, and predicting the effects of ecosystem tipping cascades on marine ecosystem services and dependent human systems) officially kicked off on the 1st of June, 2020, and will be funded for four years. The research project will contribute to creating a low-carbon, climate resistant future in line with sustainable development objectives, the Paris Agreement and the upcoming UN decade of “Ocean Sciences for Sustainable Development”. It has been funded under the European Union's “Horizon 2020” research and innovation program (Grant Number: 869383).

AWIPEV Research Base
The archipelago Svalbard is home to one of the northernmost settlements in the world: Ny-Ålesund. The town itself is essentially the “largest laboratory for modern Arctic research” – consisting of labs and stations operated by eleven countries, it brings together researchers from across the globe, and from different polar research disciplines. Scientists from France and Germany work together at a joint facility in Ny-Ålesund: AWIPEV Base, operated by the Alfred Wegener Institute, Helmholtz Centre for Polar and Marine Research (AWI) and the French Polar Institute Paul Emile Victor (IPEV).