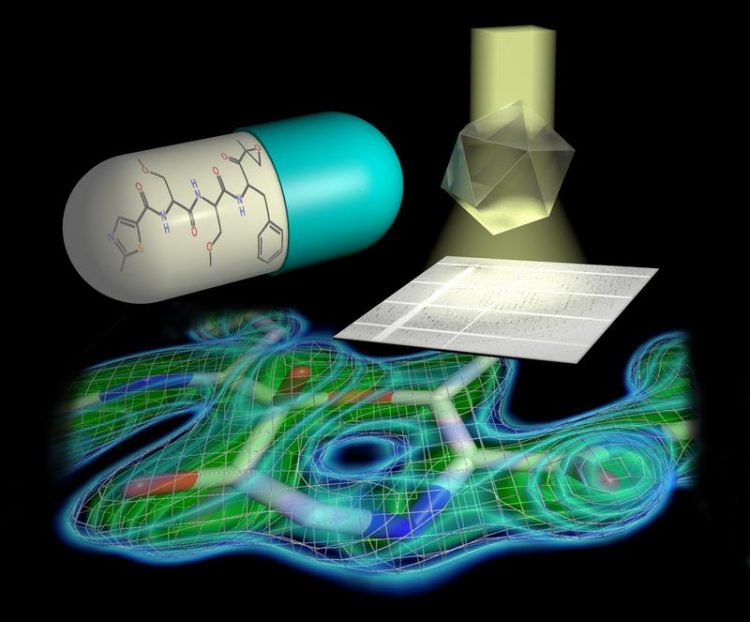 In order to understand how cellular machines such as the proteasome work, it is essential to determine their three-dimensional structure in detail. With its more than 50000 atoms, the barrel-shaped proteasome, however, is a true challenge for structural biologists.

A group of scientists led by Ashwin Chari at the Max Planck Institute (MPI) for Biophysical Chemistry in Göttingen and Gleb Bourenkov at EMBL have now managed to determine the three-dimensional structure of the human proteasome at an unprecedented resolution of 1.8 Ångström – enabling them to pinpoint the position of single atoms in the garbage disposal unit.

In a next step, the researchers solved the structure of the proteasome bound to four different inhibitors that are either already used in the clinic or are currently undergoing clinical trials. “The substantial improvement in resolution compared to previous proteasome structures has allowed us to establish the exact chemical mechanism by which inhibitors block the proteasome.

This knowledge makes it possible to optimize inhibitor design and efficacy – since only inhibitors tailored to the proteasome shut it down completely,” says Chari, project group leader in the Department of Structural Dynamics headed by Holger Stark at the MPI for Biophysical Chemistry.

The scientists discovered an important detail in the proteasome’s active site. The active site is what enables the proteasome to degrade the cell’s junk, and it is what the inhibitor drugs bind to in order to shut off that activity. In contrast to the common perception, a 7-ring structure is formed by the chemical reaction of inhibitor and proteasome active site, which contains an additional so-called methylene group.

This has far-reaching consequences for the inhibitor’s efficacy and chemical mechanism, the researchers explain. “Even though a methylene group just comprises one carbon atom and its two associated protons amidst the more than 50000 atoms of the proteasome, it decisively influences which chemical features make the inhibitor most effective in blocking the proteasome,” says Thomas Schneider, who leads a group at EMBL.

“This has to be taken into account when developing new inhibitors and searching for new drug candidates,” adds Holger Stark. The researchers have already filed a patent application for the chemical procedure to design such inhibitors. “Clinical applications are always preceded by knowledge about targets – therefore, the details, where every atom counts, make all the difference,” Bourenkov states.

The project’s success is the result of fantastic teamwork, as Max Planck researcher Chari emphasizes: “A group of scientists, all experts in their respective fields, contributed their specialized knowledge, expertise, and complemented each other perfectly.” Structural biologists, physicists, enzymologists, and biochemists of the MPI for Biophysical Chemistry, EMBL, and the University of Göttingen developed several innovative procedures.

To determine a molecule’s structure using X-ray crystallography, scientists grow crystals of that molecule, then shine a powerful beam of X-ray light on the crystal. Based on how the X-rays scatter after hitting the crystal, researchers can deduce the molecule’s 3D structure. Fabian Henneberg and Jil Schrader, junior scientists in Stark’s department and first authors of the report now published in Science, used a new method to purify proteasomes and grow the high-quality crystals that made it possible to solve its 3D structure in such detail.

The scientists have filed for a second patent application based on the purification and crystallization procedure employed in this work. “The pipeline we use to purify and crystallize the proteasome with and without inhibitors is also suitable to discover new proteasome inhibitors – in an industrial setting, screening several hundred compounds per week could be feasible,” Chari predicts.

However, the crystals were only one element of the project’s success. The second were the cutting-edge instruments developed by the EMBL research facility on the Deutsches Elektronen Synchrotron (DESY) campus in Hamburg. “The DESY light source generates X-rays of exceptional quality. With the help of powerful X-ray optics, we were able to tailor X-rays to perfectly suit the crystallized proteasome. Only this made it possible to determine the proteasome structure in unprecedented detail,” concludes Bourenkov.

The X-ray optics used in this work were installed in DESY’s PETRA III hall in 2015 thanks to funding from the German Federal Ministry for Education and Research´s (BMBF) RÅC support scheme.