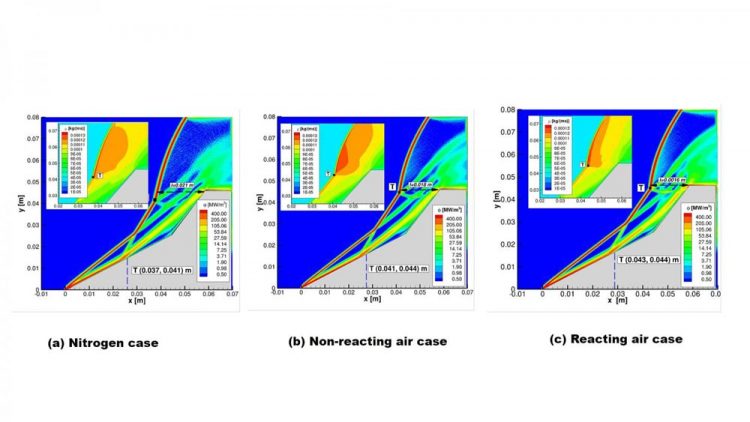 The study about chemical reactions that occur in hypersonic flow around spacecraft looked at three types of gas compositions -- molecular nitrogen, non-reacting air consisting of molecular nitrogen and oxygen, and reacting air with oxygen dissociation and the nitric oxide exchange reactions. Credit: University of Illinois Department of Aerospace Engineering

“We reduced the pressure by a factor of eight, which is something experimentalists couldn't do,” said Deborah Levin, researcher in the Department of Aerospace Engineering at the University of Illinois at Urbana-Champaign.

“In an actual chamber, they tried to reduce the pressure but couldn't reduce it that much because the apparatuses are designed to operate within a certain region. They couldn't operate it if the pressure was too low. When we reduced the pressure in the simulation, we found that the instabilities in the flow calmed down. We still had a lot of the kind of vortical structure–separation bubbles and swirls–they were still there. But the data were more tractable, more understandable in terms of their time variation.”

Levin conducted the research along with her, then, doctoral student Ozgur Tumuklu, and Vassilis Theofilis from the University of Liverpool.

The Direct Simulation Monte Carlo (DSMC) approach, a high-fidelity physical approach was used to simulate the hypersonic flow. But, like any method, it has pros and cons. One con is that it creates the flow by gathering large amounts of collision data, producing reams and reams of particle data, and with it, statistical noise.

The researchers fed the DSMC results into a window proper orthogonal decomposition program, an example of what is known as a reduced order model to make the analyses of the time behavior of the DSMC results much more feasible.

“It's a very clever method that is more tractable and can reduce computational effort,” Levin said. “Before we had this technique, we'd select three-dimensional data of pressure, density, and temperature, which are varying throughout the whole flow over the external shape of the vehicle. We'd sit at different locations in the flow and collect data at every time step.It winds up being a treasure hunt–you look here, you look there, wherever you think there is a sensitive part of the flow where you could see some changes.

“The main difference in using WPOD is that it organizes all of that spacial data, which is changing as a function of time, and it gives you some idea as to what it thinks are the decay modes,” Levin said.

In addition to the application of this new method to interpret data, the team of researchers gained new knowledge about the chemical reactions that happen in hypersonic flow. The study looked at three types of gas compositions – molecular nitrogen, non-reacting air consisting of molecular nitrogen and oxygen, and reacting air with oxygen dissociation and the nitric oxide exchange reactions.

“We learned about vibrational temperatures,” Levin said. “These are usually very hard to compute. We learned about being able to predict chemical species, like nitric oxide–a compound in the gas phase, that are only present in very small amounts. It's produced in hypersonic flows in one out of one thousand particles. It's not a major component, like 79 percent nitrogen, but it's very important and we wanted to be able to predict it. Using this technique, we were able to do it so much more easily. Because of that we were able to understand what the affect of the chemistry was in the flow that produced the nitric oxide, and how that affected the different stability modes.”

Tumuklu created short videos by saving all of the data in frames, then speeding it up to show how the flow evolves over time. Although difficult to see with an untrained eye, Levin said the video shows the difference in the way the shocks interact for the nitrogen case that has no chemical reactions and the reacting aircase of 79 percent nitrogen and 21 percent oxygen, which is the composition of air in Earth's atmosphere.

“There is also a feature called the 'triple point' represented by a red dot on the video. If you look very closely, at the two videos, the triple point on the nitrogen case never moves; it stays at one location while everything moves about it.

But in the case of the reacting air, the triple point does move. It oscillates back and forth with everything else still moving around it,” Levin said. “This told us what the effective chemical reactions were. They are dumping extra heat or energy into the flow, which changes the instability, the unsteady behavior.

Levin said aircraft designers over design to compensate for not knowing the exact needs–for example, the minimum thickness needed for a heat shield.

“Ultimately, through this basic research, we will get some answers, some rules of thumb for people, who are at the designing level,” she said. “They won't have to run petascale calculations, but they'll know that if they have certain shapes at certain positions to the angle of attack, they need to worry about instabilities when designing spacecraft for safe reentry into Earth's atmosphere or other atmospheres. They may take out a flap or reposition a flap for a control surface to minimize or prevent instabilities.”