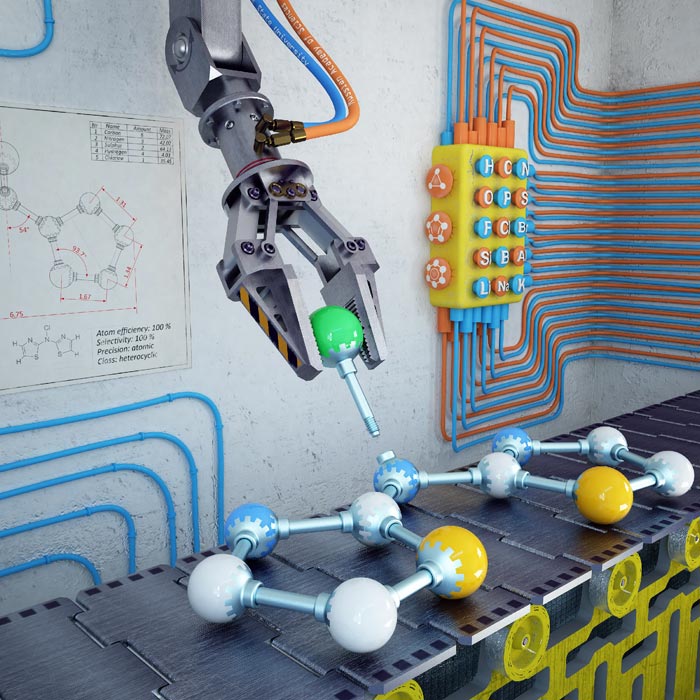 Increasing demand from high technology sectors for better approaches to industrial production is prompting the emergence of a new generation of chemical synthesis methods.

“Until recently, it was not possible to construct complex organic molecules by manipulating individual atoms,” says Professor Valentine Ananikov, laboratory head of the Zelinsky Institute of Organic Chemistry at the Russian Academy of Sciences.

“But the development of new lab equipment and state-of-the-art organic synthesis methods are facilitating a new direction in chemistry: the preparation of organic molecules, biologically active compounds, pharmaceutical substances and smart materials with atomic precision.”

Traditional methods for the preparation of organic molecules require complicated technologies, the use of expensive catalysts and the application of toxic reagents.

Their strategy includes the replacement of expensive catalysts (such as palladium, platinum and rhodium) with easier to obtain and cheaper analogues (e.g. nickel, copper and manganese). The new approach also avoids the use of toxic reagents and the production of wastes by applying alternative procedures based on sustainable protocols.

Described in Russian Chemical Reviews, the team’s approach involves preparing a target molecule by connecting molecular fragments to each other with atomic precision and carrying out all chemical modifications with complete selectivity. So far, Professor Ananikov and his colleagues have applied the new approach to synthesise some 300 individual molecules – ranging from flame retardants and ligands for catalysis to biologically active compounds and pharmaceutical building blocks.

Among its achievements, the multidisciplinary team has shed new light on the factors responsible for the formation of chemical bonds between particular atoms or molecular fragments, while completely controlling the selectivity of these reactions. What’s more, in depth studies carried out in the 14 laboratories have resulted in efficient protocols for improving the performance of chemical transformations. They have also contributed to the development of a new generation of industrial procedures.

According to the Russian team, the new approach could also be used in connection with many established procedures for preparing organic molecules such as cross-coupling reactions, fluorination reactions, catalytic hydrogenations and oxidations, among others. The researchers are now focused on implementing atomic precision chemical reactions on an industrial scale and fostering international collaborations.