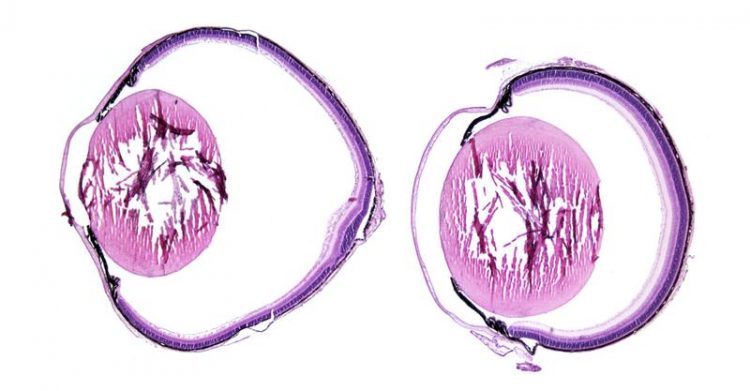 Babies’ eyes are almost as large as those of an adult because human eyes grow very little after birth. Things are different with reptiles and fish. Their eyes grow constantly, although they have the same structure as mammalian eyes, i.e. those of humans.

What inhibits the growth of mammalian eyes had not been previously understood. It was known, though, that excessive growth of human eyes leads to myopia or nearsightedness, since the eyeball becomes too long and the light falling on the eye cannot be focused on the retina.

Dr. Christ, who works as an independent Helmholtz Fellow at the MDC, and Prof. Willnow have now established the mechanism that restricts growth of the human eye and how it prevents myopia. The starting point for their study was a rare form of severe myopia in patients who have a mutation in LRP2 gene, encoding a receptor LRP2 in the retina. Scientists were also able to observe greatly enlarged eyes in mice lacking this LRP2 gene.

Working together with eye specialists of the Toronto Western Research Institute in Canada, and the Freie Universität Berlin, Dr. Christ, Prof. Willnow and their colleagues at MDC pursued the question of why a mutation in the LRP2 gene leads to uncontrolled growth of the mammalian eye.

In a study published by the renowned scientific journal Developmental Cell, they now report that LPR2 sits in the stem cell niche of the mammalian retina. There, LRP2 ensures that this niche does not become overactive to cause overgrowth of the mammalian eyes. The counterpart for LRP2 in this process is a signaling molecule named Sonic Hedgehog (SHH for short) that triggers growth of stem cells in many tissues.

It has long been known that SHH controls development of the embryonic eye. It does so by stimulating the stem cells in the retina to proliferate and to differentiate into all cells types of the retina including rods and cones. As it turns out, LRP2 is specifically placed at the outer most margin of the retina in mammalian eyes.

There, it intercepts SHH before the growth factor can reach the tip of the stem cell niche. In this way, the stem cells at the edge of the human retina are not stimulated to proliferate and eye growth is blocked. In patients who do not produce a functional LRP2 because the gene is mutated, SHH signals now make their way to the stem cell niche at the margin of the retina. The SHH molecules then activates the cells of this stem cell niche – and the eyeball enlarges greatly.