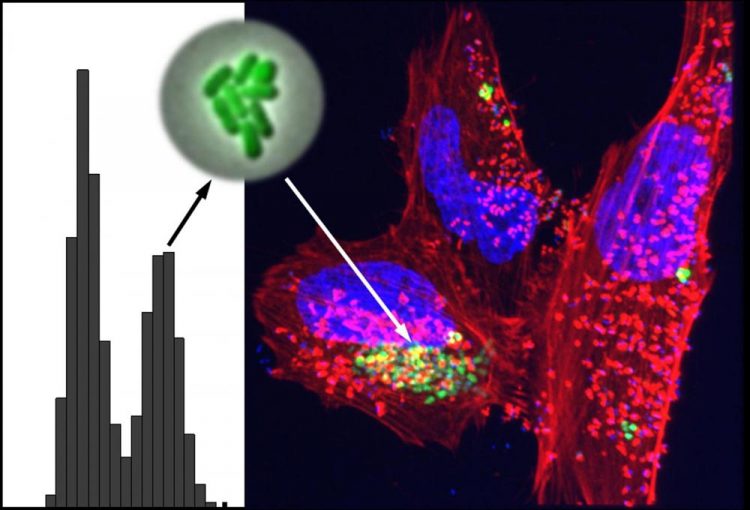 The image shows the spontaneous differentiation of the bacteria into two states (shown in the histogram on the left as two peaks). One of these peaks represents the hypervirulent state that is seen on the right infecting human cells (bacteria are marked in green, the human cells in red and violet). Photo credit: Irine Ronin

Researchers at the Hebrew University of Jerusalem have discovered a survival strategy that harmful bacteria can use to outsmart the human immune response, resulting in more severe and persistent infections and more effective spreading from person to person.

Bacteria have an array of strategies for coping with the harsh and changing environments in the organisms they invade. These include developing adaptive mutations as they evolve, and activating specific genes to respond to changes. However, sometimes these defenses aren't enough, and alternative strategies are needed.

One such alternative strategy recently discovered is the generation of non-genetic variability, in which bacteria develop sub-populations that are each pre-adapted to a different environment or task. This pre-adaptation could give invading bacteria an extra advantage during invasion and in overcoming the immune system. Called phenotypic variability, this variation involves the development of sub-populations of bacteria with altered traits such as size or behavior.

To better understand this survival strategy, researchers Irine Ronin, Naama Katsowitz, Ilan Rosenshine and Nathalie Q. Balaban, led by Dr. Irine Ronin from the Balaban lab at the Hebrew University of Jerusalem's Racah Institute of Physics, examined whether non-genetic variability plays a role in the virulence of a human-specific pathogen, enteropathogenic E. coli (EPEC), responsible for many infant deaths worldwide. Their goal was to uncover whether exposing EPEC to challenging conditions similar to the ones they would encounter in a human can trigger EPEC to spontaneously differentiate into different bacterial sub-populations. To do this, they used mathematical modeling and genetic analysis.

Their analysis, reported in the peer-reviewed journal eLife, revealed that EPEC spontaneously differentiates into two sub-populations, one of them particularly virulent, when exposed to conditions that mimic the host environment. Surprisingly, they found that once triggered, this hyper-virulent state maintains a very long memory and remains hyper-virulent for many generations. In addition, they identified the specific regulatory genes that control the switch between the non-virulent and hyper-virulent states in EPEC bacteria.

“These results shed new light on bacterial virulence strategies, revealing the existence of pre-adapted EPEC subpopulations which can remain primed for infection over weeks,” said Prof. Nathalie Q. Balaban. “They also show that long-term memory drives the expression of the pathogen's major virulence factors, even upon shifting to conditions that do not favor their expression.”

“The unique memory switch we identified may be common in pathogenic bacteria, resulting in increased disease severity, higher infection persistency and improved host-to-host spreading,” said Prof. Ilan Rosenshine. “Further research to characterize the switching mechanism may point to strategies for tuning down EPEC virulence and fighting infections, and our approach can provide a framework to search for similar switches in other pathogens.”