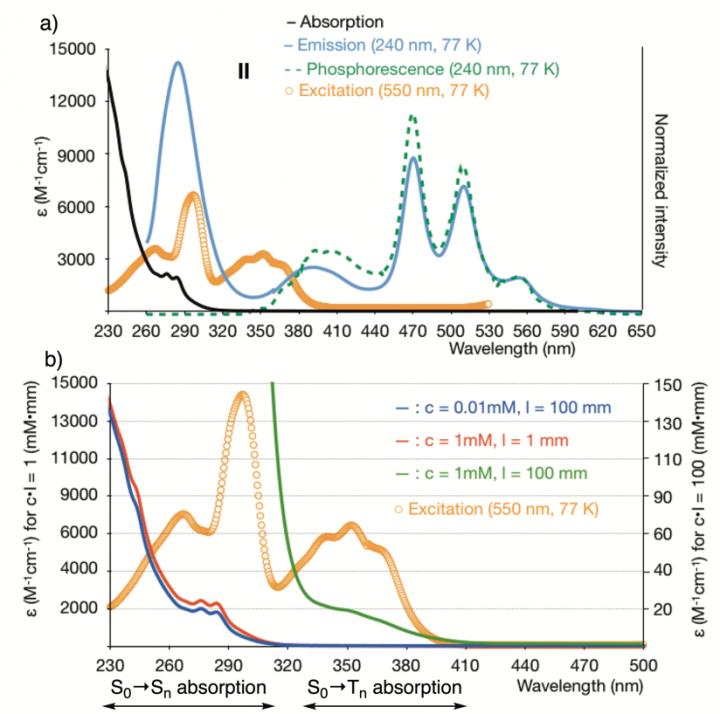 (a) Absorption and emission properties of hypervalent iodine compound II; the vertical axis is normalized. (b) Absorption spectra of II under various conditions. Credit: Masaya Nakajima

In recent years, researchers have paid much attention to techniques for processing materials using visible light because this is safer and easier to handle than using other light sources, such as UV light. The key in such technologies is to control the photoreaction in order to achieve the intended structural changes in the material.

“We've been studying the mechanism of photoreactions in basic synthetic organic chemistry, but there has always been a mystery; photoreactions are promoted in molecules containing iodine during irradiation with light from the non-absorbing region. To fully understand and be able to control photoreactions in materials, we had to solve this mystery,” says Tetsuhiro Nemoto, a professor in the Graduate School of Pharmaceutical Sciences at Chiba University in Japan.

The research group led by Nemoto and Masaya Nakajima, an assistant professor, investigated emission characteristics, such as absorption wavelength, fluorescence, and phosphorescence, in iodine-containing molecules. The wavelength of excitation light required for phosphorescence at 550 nm ranged from 230 to 410 nm, even though almost no absorption band was observed at wavelengths above 320 nm (Fig.1).

Furthermore, when the absorption wavelength of high-concentration samples was measured using a 10-cm cell, 10 times as long as a normal one, a S0 → Tn absorber was observed. With these physical results, the research group succeeded in proving the existence of the S0 → Tn transition in the iodine-containing molecules.

Interestingly, the group also found that radical reactions specifically occurring in photoreactions with visible light were a common chemical phenomenon not only with iodine (I) but also with heavy-atom-containing molecules such as bromine (Br) and bismuth (Bi).

Based on these physical and chemical findings, we need to renew our understanding of S0 → Tn, which according to current textbooks, does not play the main role as a mechanism behind photoreactions.

“In the future, we expect that this mechanism of photoreaction will lead to the design of new molecules and reactions in various research fields,” Nakajima says.