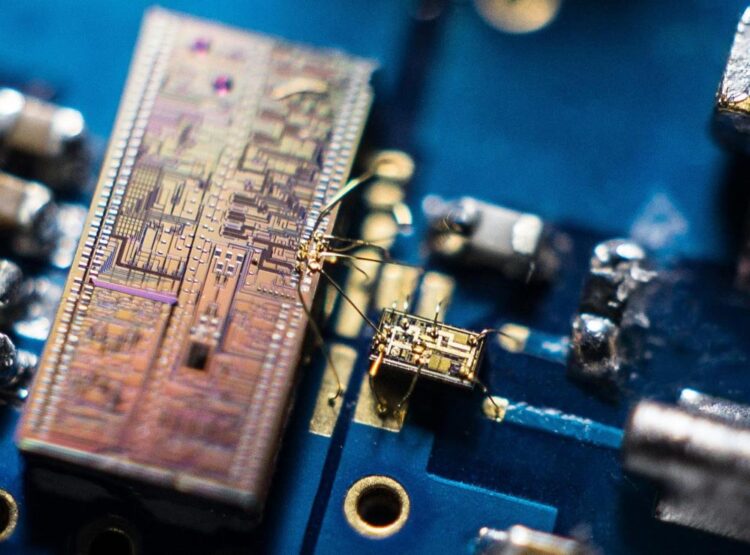 Researchers have developed a tiny device that paves the way for higher performance quantum computers and quantum communications, making them significantly faster than the current state-of-the-art.

Bristol researchers have developed a tiny device that paves the way for higher performance quantum computers and quantum communications, making them significantly faster than the current state-of-the-art.

Researchers from the University of Bristol’s Quantum Engineering Technology Labs (QET Labs) and Université Côte d’Azur have made a new miniaturized light detector to measure quantum features of light in more detail than ever before. The device, made from two silicon chips working together, was used to measure the unique properties of “squeezed” quantum light at record high speeds.

Harnessing unique properties of quantum physics promises novel routes to outperform the current state-of-the-art in computing, communication and measurement. Silicon photonics – where light is used as the carrier of information in silicon micro-chips – is an exciting avenue towards these next-generation technologies.

“Squeezed light is a quantum effect that is very useful. It can be used in quantum communications and quantum computers and has already been used by the LIGO and Virgo gravitational wave observatories to improve their sensitivity, helping to detect exotic astronomical events such as black hole mergers. So, improving the ways we can measure it can have a big impact,” said Joel Tasker, co-lead author.

Measuring squeezed light requires detectors that are engineered for ultra-low electronic noise, in order to detect the weak quantum features of light. But such detectors have so far been limited in the speed of signals that can be measured – about one thousand million cycles per second.

“This has a direct impact on the processing speed of emerging information technologies such as optical computers and communications with very low levels of light. The higher the bandwidth of your detector, the faster you can perform calculations and transmit information,” said co-lead author Jonathan Frazer.

The integrated detector has so far been clocked at an order of magnitude faster than the previous state of the art, and the team is working on refining the technology to go even faster.

The detector’s footprint is less than a square millimeter – this small size enables the detector’s high-speed performance. The detector is built out of silicon microelectronics and a silicon photonics chip.

Around the world, researchers have been exploring how to integrate quantum photonics onto a chip to demonstrate scalable manufacture.

“Much of the focus has been on the quantum part, but now we’ve begun integrating the interface between quantum photonics and electrical readout. This is needed for the whole quantum architecture to work efficiently. For homodyne detection, the chip-scale approach results in a device with a tiny footprint for mass-manufacture, and importantly it provides a boost in performance,” said Professor Jonathan Matthews, who directed the project.