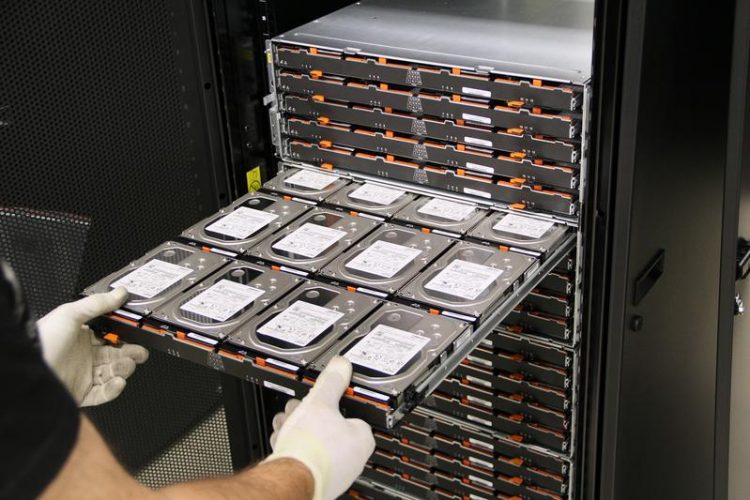 One of the disc enclosures of the 5 petabytes HPSS disk cache at DKRZ Böttinger, DKRZ

The new system allows currently a transfer of climate data between the high performance computer and the archive system with a bidirectional bandwidth up to 12 Gigabyte per second, increasing up to 18 Gigabyte per second in autumn 2015.

The system manages all archived simulation data at DKRZ and serves as the central in- and output interface of the tape library.

Hamburg, May, 8th, 2015: The German Climate Computing Center (DKRZ), supported by IBM, took in operation the first configuration level of its new Hierarchical Storage Management System (HSM) that is based on a High Performance Storage Systems (HPSS). The system manages all archived simulation data at DKRZ and serves as the central in- and output interface of the tape library.

Already in autumn 2014, experts from IBM/Global Technology Services have implemented the latest HPSS software and the Linux operation system by Red Hat on the IBM x86 server as well as a HPSS disk cache with five Petabyte. The size of the disk cache, which serves as a temporary buffer, corresponds to the storage capacity of 5,000 well equipped notebook computers.

IBM specialists have migrated the data of the former, significantly smaller HPSS system to the new system within only two days of operational interruption. The new system with an essentially higher sustained throughput (in- and output) allows a transfer of climate data between the high performance computer and the archive system with a bidirectional bandwidth up to 12 Gigabyte per second. Until autumn 2015 the system will be once more upgraded to a bandwidth up to 18 Gigabyte per second (peak).

At the moment the tape library at DKRZ contains about 20 million data with a data volume of 40 Petabyte. Using HPSS DKRZ will be able to handle the massive data growth in the climate research. Within the next five years a data production of annually 75 Petabyte and a total volume of 500 Petabyte is expected, appropriate to the estimated growth of data production on the new high performance computer system for earth system research 3 (HLRE-3) being currently installed at DKRZ.

The upgrade of the HSM system is part of the project HLRE-3 that is funded with 41 million euro – two thirds by the Federal Ministry of Education and Research and one third by the Helmholtz Association. The financial resources are passed on to DKRZ by the Helmholtz Center Geesthacht – Center for Materials and Coastal Research.

HPSS is implemented for very large scientific data archives at research facilities and universities, for weather forecast systems as well as in the field of defense and national security. Organizations with CPU- and data intensive processing use HPSS. In Europe and Germany it is used among other by the European Centre for Medium Range Weather Forecasts (ECMWF), the Karlsruhe Institute for Technology (KIT), the German Meteorological Service (DWD) and the computing center Rechenzentrum Garching of the Max Planck Society (RZG).