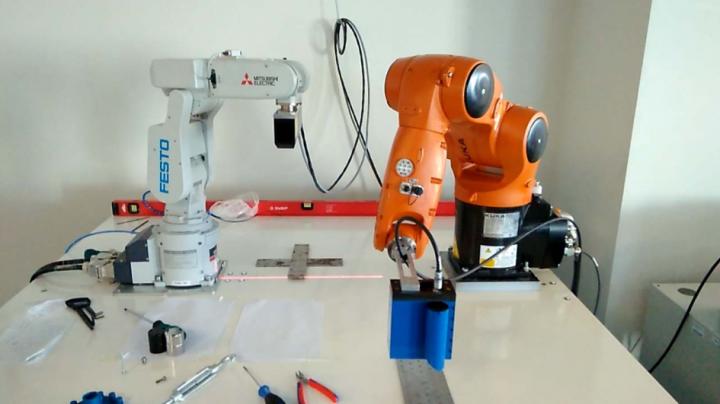 Using the software module, a robot can identify constant and variable errors in the signals of its sensors and malfunctions of electromechanical drives and corrects the control signals accordingly.

The module eliminates all possible external noise and prevents distortions in sensor signals thus preserving the required levels of operating quality. The new development was presented at the international conference ICCAD'19 that took place in Grenoble, France on July 2-4.

'Even an efficient system might experience issues such as external noise that distorts software signals, malfunctioning sensors, overheated engines, or increased friction due to foreign inclusions. We've developed a range of mathematical controllers, identifiers, and filters that are united under one software module.

Using it, a robot can preserve the required accuracy of its work. It can identify the defects and their volumes and, acting just like humans, form signals to compensate for the negative consequences of these defects. At the same time, our module doesn't make the whole control system too complex,' says Professor Vladimir Filaretov, PhD in Technical Sciences, the Head of the Department of Automation and Control at the School of Engineering, Far Eastern Federal University.

Alexander Zuev, assistant professor of the Department of Automation and Control, adds that the methods for the identification and further correction of defects in control signals of mechatronic systems were being intensively developed in the whole world.

However, until now the scientists failed to take the dynamics of robots into consideration because it requires complex mathematical transformations. This reduces the quality of diagnostics. Moreover, previously the scientists were able to correct the control signals only in simple machines and only if defects occurred in just one sensor.

'Our mathematical apparatus implemented in the software allows a robot to accurately identify the defects and compensate for their consequences in the presence of numerous external interferences when several sensors malfunction at the same time and the parameters of an electric drive change. The software is universal and can be applied to all types of robots', explains Alexander Zuev.

At the ICCAD'19 conference the team from FEFU also presented a new control principle for smart industrial robots. It lies in the management of software signals on several levels – the executive and the strategic ones. It also takes into account inevitable errors made in the course of manufacture of mechanical robotic parts and provides for the correction of the management program in order to allow the machines to fulfil extra-accurate tasks and preserve high efficiency levels.

The new module is a part of a universal program for smart control of software signals in robots.