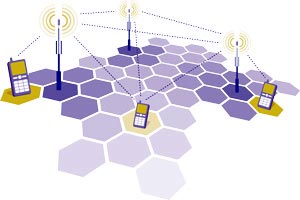 Data-intense multimedia applications are stretching cellular network capacities to their limits, but A*STAR researchers have developed a strategy to ease this burden using ‘data offloading’1. By using high-level computational algorithms to investigate data transfer between cellular base stations and ‘complementary’ setups such as home Wi-Fi systems, the team identified optimal ways to satisfy user demands across multiple, heterogeneous networks.

Wi-Fi networks and small, low-power femtocell and picocell cellular antennas are inexpensive, simple to install, and highly compatible with existing smartphones and tablets. For these reasons, mobile operators consider data offloading to these complementary networks as a more feasible way to expand capacity than installing obtrusive infrastructure or bidding for new frequency spectra.

Chin Keong Ho and Sumei Sun from the A*STAR Institute of Infocomm Research in Singapore and colleagues probed one of the biggest obstacles for implementing this sharing technique: deciding when and how much data to offload from the primary network. “Many parameters, such as user requirements and cellular coverage, can affect the real-time performance of the base station,” says Ho. “The dynamics of network and user traffic make optimal offloading decisions very challenging.”

Ho notes that the loads, or demand for cellular service, of networks using data offloading are coupled through complex, nonlinear relationships. For example, increasing the load on one base station can produce interference with another base station. To maintain the same quality of service, the second base station may have to increase its load or power — subtle changes that can ripple through the combined Wi-Fi and cellular networks.

To resolve these problems, the team developed a simple but accurate model to describe a network of base stations that can interfere with each other and a series of complementary cells that can accept excess data. They then employed advanced mathematical tools to produce a load-coupled equation that characterized and optimized the data-sharing network in detail.

As a result, the team could suggest potential strategies. “One interesting finding is that for certain networks, it is impossible to satisfy user demands no matter how large the powers of the base stations,” says Ho. “Consequently, data offloading is the only means to serve the users — a finding that highlights the fundamental importance of this approach.”

The researchers believe that their load-coupling model could find practical use by determining the optimal number of small cells or Wi-Fi access points in an offloading system. Furthermore, their equations could ‘future-proof’ mobile networks by analyzing performance degradation as user requirements inevitably change.