Setting the pace in the age of digital production 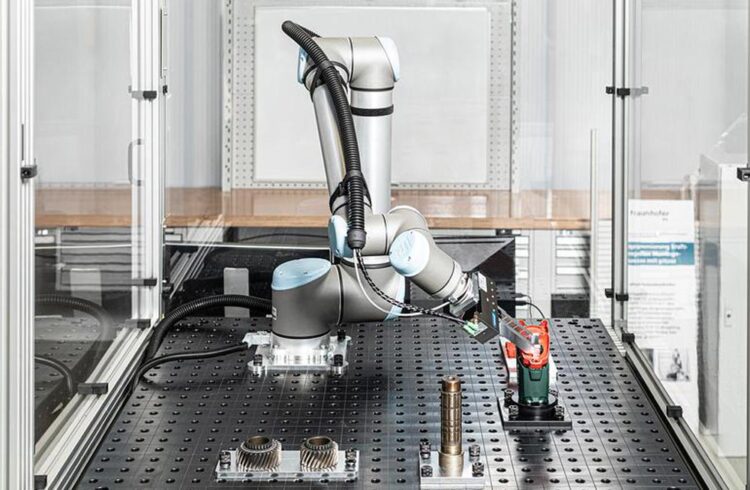 With the pitasc software, assembly applications such as snapping on or pushing components into each other can be automated in a way that makes economic sense.
Credit: Rainer Bez / Fraunhofer IPA

Sustainable, autonomous, intelligent, clean: From self-learning robots for use in fields and factories to state-of-the-art cleanroom technologies, methods for explaining machine learning and software tools for optimized production – Fraunhofer IPA will be showcasing a wealth of applications and services for automated production at automatica from 21 to 24 June 2022.

After a break due to the coronavirus pandemic, the automatica trade fair will be returning this summer focusing on four clusters: “Digital Transformation”, “Artificial Intelligence”, “Humans and Machines” and “Sustainable Production” – four topics which Stuttgart-based Fraunhofer IPA is also intensively researching and in which it is implementing innovations. At the trade fair, packed into a space measuring just 240m2, the institute’s staff will show what is already possible today and where the automation journey is headed.

The journey does not always have to take place in a factory, as the agricultural robotics exhibit shows. The “CURT” Agri-robot, developed by scientist Kevin Bregler and his team, is used for mechanical weed control. Using CURT should ensure that fewer pesticides are needed to protect crops and that it may even be possible to completely dispense with herbicides, in this way helping to make the agricultural sector both ecologically and economically sound.

The exhibit showcases a robot system whose hardware and software were developed entirely at Fraunhofer IPA. By way of example, an important hardware component of the system is the manipulator, which removes weeds in an energy-efficient and environmentally compatible manner. On the software side, navigation and image processing are particularly important functions. They enable the robot to find its way autonomously and safely, even under difficult, constantly changing field conditions, and to identify individual plants, rows of plants and weeds to be removed. With the help of artificial intelligence (AI), the collected data can also contribute to making processes and decisions more efficient and autonomous. The robot is emblematic of many of the Institute’s activities in the field of resource-conserving and sustainable agriculture.

Back to the shop floor: This is wher e many companies deal with the question of whether and how they can automate their assembly tasks. For years now, Fraunhofer IPA has been offering Automation Potential Analysis (APA) for this question. Initially, the APA was contingent on the knowledge of an automation expert. A new app now makes this knowledge more easily accessible. It guides users to analyze their own assembly processes, evaluates the answers and delivers information on the potential for automation. “With our app, anyone can become an expert in the evaluation of assembly processes,” explains Joshua Beck, who works as a research assistant at Fraunhofer IPA and co-developed the app. By taking technical and economic aspects into account, the app provides a comprehensive database for investment decisions. It can be obtained for test use with a simple license agreement. In addition, there is a demo model at the institute for training purposes.

NeuroCAD is a piece of software for assembly automation. It analyzes component properties with the help of machine learning methods and uses them to determine the extent to which a component is suitable for assembly automation. Users can upload their STEP files free of charge at https://neurocad-dev.web.app/dashboard and find out within a few seconds how easy or difficult it would be to isolate a particular component. The tool also evaluates the gripping surfaces of the component, as well as how well it can be aligned. In addition, the neural network will calculate the degree of probability of the result being correct. NeuroCAD helps to avoid inadvisable component designs and accelerates assembly processes.

The pitasc modular system for programming force-controlled assembly processes shows how processes such as clipping, riveting or screwing, which were previously carried out manually, can be automated in an economically viable way. Frank Nägele, head of the Robot Programming and Control Group at Fraunhofer IPA, explains: “Until now, it was necessary to largely reprogram a robot system for each application. With our software, once tasks have been modelled, they can be quickly transferred to new product variants, products and even robots made by other manufacturers by simply adjusting the parameters.” The software is modular in structure, enabling assembly processes to be programmed in a modular way: it contains many prefabricated and reusable program modules that can be individually assembled when setting up a robot system. pitasc is ready for use in pilot applications that the scientists wish to implement together with companies.

The underlying technology for all services comprising the new “ARCaide Assembly Suite” software is based on AI that analyzes and evaluates what are known as STEP files. These information-rich files can be generated by any CAD system and provide the “3D analysis AI” with all the necessary information to derive precise structured assembly information. A second software component of ARCaide is the “Assembly Composer”. This reads the extracted assembly information from the STEP file and feeds it to a graphical tool for assembly planning. The tool displays assembly-relevant information in a simplified graphic form so that skilled operators can plan the assembly easily and without errors. “KIM” AI assembly assistance completes the trio of software components. It automatically and cost-effectively creates assembly “assistants” that interactively support the fitters. The assistance is variable and could, for example, be 2D or 3D-based or might also be based on augmented reality.

Learning robots thanks to AI

Another big challenge in automation is Bin Picking. Fraunhofer IPA’s AI Picking exhibit demonstrates how machine learning methods and simulations significantly improve the application in terms of autonomy and performance.

The scientists demonstrate this with a robot that picks objects from an undefined pose out of a box or from a pallet. For this, an AI-based algorithm for object pose estimation provides reliable and accurate object poses in a few milliseconds. “New objects can be learned quickly and easily based on a CAD model,” explains project manager Felix Spenrath, adding: “The software can also detect and solve entanglements and tolerate packaging material.” The robot was comprehensively trained in a simulation environment and this knowledge is then transferred to the real application. Gripping poses and strategies are automatically generated and evaluated based on this knowledge. An intuitive user interface completes the application.

In addition to gripping, assembly also benefits from self-learning robots. The rob-aKademI joint research project exhibit shows how this can be achieved. The project aims to enable flexible robot programing for assembly tasks with little effort. It primarily addresses companies that are looking for a simple but future-proof entry into robot-based assembly automation. For this purpose, a simulation environment has been created in which the robot learns to assemble on the basis of CAD data and with the help of the AI method of “reinforcement learning”, i.e. the principle of trial and error. It also learns to deal with workpiece tolerances and inaccuracies in the process. This should make possible robot-based robust assembly up to batch size 1. A robot cell will demonstrate the concrete application of the technology.

Contamination-free production thanks to “second skin”

Not only more autonomous but also ultra-clean production is in increasing demand. “Clean production environments enable the high-tech technologies of the future,” explains Udo Gommel, Head of the Department of Ultra-Clean and Micro-Production at Fraunhofer IPA. “Tomorrow’s key technologies will only advance with purity technology. It is crucial: from battery production to biotechnology.”

In this context, the 2ndSCIN® protective cover (patent pending) makes dynamic automation components such as a robot ready for ultra-clean production. The sheath consists of a permeable, movable and multi-layered textile, which is modelled on human skin in its properties. Depending on the application, two or more layers can be superimposed. Each layer is separated by a spacer. In each interspace gap, air can be sucked in or removed, for example. In this way, particles originating from the environment or from the automation component can be removed. Delivering special gases to the interspaces of the system enables their sterilization, for example. In addition, the cover can be changed in about an hour and can be reused after decontamination. The textile layers are also equipped with sensors that continuously measure parameters such as particle concentration, chemical contamination, pressure and humidity. AI-based algorithms evaluate this sensor data and enable predictive maintenance, for example. “2ndSCIN® is extremely versatile in design, so we can implement individual requirements,” explains Udo Gommel. “In this way, we can address many requirements for cleanroom-compatible protective covers for components that existing products do not fulfil.”

In robotics, as in numerous other fields of application in production and services, machine learning methods and artificial neural networks are increasingly being used. Depending on the application, it is becoming more important and sometimes also legally necessary to know how they work and how they produce a particular result. They must become “explainable”. However, due to their complexity, this is often not yet possible. “The more powerful a neural network, the more difficult it is to understand,” admits Professor Marco Huber, who heads the Cyber Cognitive Intelligence (CCI) Department and the Machine Vision and Signal Processing Department at Fraunhofer IPA.

At automatica, Fraunhofer IPA is consequently presenting procedures under the motto “Explainable AI” (xAI) that visualize decisions made by neural networks and make them transparent and comprehensible for the user. As Marco Huber says: “This comprehensibility fosters greater acceptance of AI, creates trust, improves correct functioning, and provides legal certainty.” The explainability methods are suitable for all applications that are especially safety-critical or highly regulated and use neural networks.

The implementation of this vision – Maximize Overall Equipment Effectiveness – is demonstrated by the “MOEE” exhibit, which replicates an automated manufacturing asset. Monitoring takes place both via the PLC and via external sensors such as light barriers or cameras. These observation sources are used to generate a behavioral model of the manufacturing asset, making continuous online analysis of the asset possible and based on this, recording normal behavior and identifying bottlenecks or production losses. “This approach allows us to create process transparency for our customers and to automatically reveal the optimization potential,” explains Yannick Mayer, scientist at Fraunhofer IPA and co-developer of MOEE.

http://www.wir-produzieren-zukunft.de/de/automatica2022 – An overview of all exhibits and to make an appointment