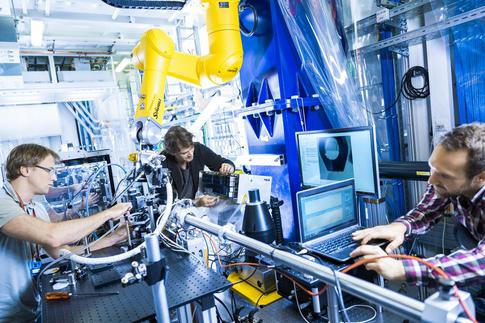 European XFEL scientist Peter Zalden (left) and colleagues at the FXE instrument at European XFEL. In a paper published today in Science, a group of scientists led by Zalden and researchers from the University of Duisburg-Essen in Germany, describe how they used the X-ray free-electron laser LCLS at the SLAC National Accelerator Laboratory, California, to show that a transition in the chemical bonding mechanism enables the data storage in phase-change materials used in smartphones. The results can be used to optimize phase-change materials for faster and more effective data storage technologies. Similar experiments are already scheduled at the instrument for Femtosecond X-ray Experiments (FXE) at European XFEL, where the X-ray pulses are short and intense enough to capture snapshots of these fast processes. Copyright: European XFEL / Jan Hosan

Phase-change materials are used in the latest generation of smartphones enabling higher storage densities and energy efficiency. Data is recorded by switching between glassy and crystalline material states by applying a heat pulse. However, to date it has not been possible to study what happens at the atomic level during this process.

In a paper published today in Science, a group of scientists led by researchers from European XFEL and the University of Duisburg-Essen in Germany, describe how they used the capabilities of the X-ray free-electron laser LCLS at the SLAC National Accelerator Laboratory, California, to show that a transition in the chemical bonding mechanism enables the data storage in these materials.

The results can be used to optimize phase-change materials for faster and more effective data storage technologies. They also provide new insights into the process of glass formation.

Phase-change materials made of compositions of the elements antimony, tellurium and germanium, can be used to store increasingly large amounts of data, and do so quickly and energy efficiently. They are used, for example, in replacements for flash drives in the latest generation of smartphones.

When an electrical or optical pulse is applied to heat these materials locally, they change from a glassy to a crystalline state, and vice versa. These two different states represent the ‘0’ and ‘1’ of the binary code needed to store information. However, to date it has not been possible to resolve how exactly these changes of state occur on an atomic level.

In an experiment at the Linac Coherent Light Source (LCLS) in California, a group of scientists led by researchers from European XFEL and the University of Duisburg-Essen used a technique called femtosecond X-ray diffraction to study atomic changes when the materials switch state.

In the experiment, that took place before European XFEL was operational, an optical laser was first used to trigger the material to change between crystalline and glassy states. During this extremely fast process, the X-ray laser was used to take images of the atomic structure.

Only X-ray Free-Electron Lasers such as LCLS or European XFEL produce X-ray pulses that are short and intense enough to capture snapshots of the atomic changes occurring on such short timeframes. The scientists collected over 10,000 images in order to shed light on the sequence of atomic changes that occur during the process.

To store information with phase-change materials, they must be cooled quickly to enter a glassy state without crystallizing. They must also stay in this glassy state for as long as the data is to be stored. This means that the crystallization process must be very slow to the point of being almost absent, such as is the case in ordinary glass.

At high temperatures, however, the same material must be able to crystallize very quickly to erase the information. The way a material can form a stable glass but at the same time becomes very unstable at elevated temperatures has puzzled researchers for decades.

In their experiment, the researchers studied the fast cooling process, by which a glass is formed. They found that when the liquid is cooled sufficiently far below the melting temperature, it undergoes a structural change to form another, low-temperature liquid. This low-temperature liquid can only be observed on very short timescales, before crystallization takes place.

The two different liquids had not only very different atomic structures, but also different behaviors: The liquid at high temperature has a high atomic mobility that enables the atoms to crystallize, i.e., to arrange in a well-ordered structure.

However, when the liquid passes below a certain temperature below the melting point, some chemical bonds become stronger and more rigid and can hold the disordered atomic structure of the glass in place. These observations were supported by computer simulations performed at RWTH Aachen University.

The simulations provided further details of the atomic structure of the two liquids and revealed changes in the electronic properties, showing that the high-temperature liquid is more metallic than the low-temperature liquid – consistent with the formation of more rigid bonds. It is only the rigid nature of these chemical bonds that prevents the transformation and – in the case of phase-change memory devices – secures the information in place.

Peter Zalden, scientist at European XFEL and first author of the study explains “current data storage technology has reached a scaling limit so that new concepts are required to store the amounts of data that we will produce in the future. Our study explains how the switching process in a promising new technology based on glass formation can be fast and reliable at the same time.”

Klaus Sokolowski-Tinten from the University of Duisburg-Essen, who initiated the project, adds “the results and our time-domain approach can also help to understand how liquids of other classes of materials behave when they are rapidly cooled to temperatures well below the melting point and form a glass. This year we will do similar experiments at different facilities worldwide – including the European XFEL – where the femtosecond pulses are short and intense enough to capture snapshots of these fast processes.”

About European XFEL:
The European XFEL in the Hamburg area is a new international research facility of superlatives: 27,000 X-ray flashes per second and a brilliance that is a billion times higher than that of the best conventional X-ray sources open up completely new opportunities for science. Research groups from around the world are able to map the atomic details of viruses, decipher the molecular composition of cells, take three-dimensional “photos” of the nanoworld, “film” chemical reactions, and study processes such as those occurring deep inside planets. The operation of the facility is entrusted to European XFEL, a non-profit company that cooperates closely with its main shareholder, the research centre DESY, and other organisations worldwide. European XFEL has a workforce of more than 350 employees and started user operation September 2017. With construction and commissioning costs of 1.25 billion euro (at 2005 price levels) and a total length of 3.4 kilometres, the European XFEL is one of the largest and most ambitious European new research facilities to date. At present, 12 countries have signed the European XFEL convention: Denmark, France, Germany, Hungary, Italy, Poland, Russia, Slovakia, Spain, Sweden, Switzerland, and the United Kingdom.