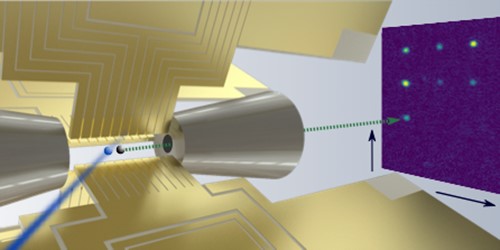 Schematic representation of the ion trap (left) as the source of an ion beam to write a specific array of color centers into a crystal (right). Ill./©: QUANTUM, Institute of Physics, JGU

Modern electronics is based on doped semiconductors. To synthesize electronic components, dopant atoms such as aluminum or phosphorus are embedded into crystals of ultrapure silicon. This allows for tailoring semiconductor conductivity according to the desired application.

In modern electronic computer processors, miniaturized to just a few nanometers, only less than ten dopant atoms are relevant for the functionality. Quantum components, which are used for novel quantum computers or quantum simulators, will go even one step further in that they require an array with only single dopant atoms in a high-purity crystal.

These crystals were subsequently examined under a high-resolution confocal microscope in collaboration with a team of researchers headed by Professor Jörg Wrachtrup at the University of Stuttgart. They determined a positioning accuracy of 35 nanometers. In principle, this accuracy is already sufficient to implant arrays of dopant ions into components for future quantum processors.

The research results were published as a highlight in the current volume of the international journal Physical Review Letters and represent an important innovation with a wide potential for applications, as the method can be extended to other crystals and dopant atoms.

Image:
http://www.uni-mainz.de/bilder_presse/08_physik_quantum_dotieratome.jpg
Schematic representation of the ion trap (left) as the source of an ion beam to write a specific array of color centers into a crystal (right).
Ill./©: QUANTUM, Institute of Physics, JGU