In theory chips should stick 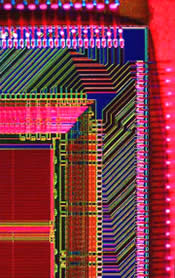 The chips are down - but not out. <br>© Michael W. Davidson

Silicon still has a lot to offer the microelectronics industry

The end is not nigh for silicon chips. They have “enormous remaining potential”, predicts a new analysis of the limits of integrated circuit technology1.

By around 2011, chips could be holding thousands of times more transistors than the billions they house today, calculate James Meindl and colleagues at Georgia Institute of Technology in Atlanta. Trillion-transistor chips are known as ’terascale integration’ (TSI) circuits.

This level of miniaturization would increase computer speed and capability by as much as the difference between today’s machines and the cumbersome microcomputers of the early 1980s.

Neither fundamental physics nor materials science rules out TSI, Meindl’s team argues, although the technical challenges are immense. TSI would require devices – made from layers of electrically conducting silicon and insulating silica – that are much smaller than today’s.

Silica layers, for example, would have to be less than one millionth of a millimetre (one nanometre) across, and components would need to be less than 10 nanometres wide. Today’s technologists would be delighted to reduce device dimensions to ten times this value. Existing methods cannot carve silicon circuits at such fine scales, so new fabrication techniques will be needed.

Meindl’s group has assessed the limits that physics, materials and circuit architecture impose on chip capacity. For example, at the fundamental level, the uncertainty principle of quantum mechanics restricts how fast devices can switch between two states: ’on’ and ’off’. The speed of light limits how quickly signals can travel.

Materials-wise, layer thickness is limited by silica’s ’leakiness’, which interferes with the electrical isolation of the silicon terminals in transistors. Another big restriction comes from the accuracy with which dopant atoms can be mixed into very small volumes of silicon. Dopants fine-tune the electrical properties of silicon – if they are unevenly distributed at small scales, the device can fail.

Silicon circuits can also be compromized by crosstalk between components, which can occur if they are too close together. And a high density of devices raises the risk of meltdown as each generates heat.

Some had feared that these considerations spelled the end of the road for silicon, and that future computers will have to use completely different materials and principles. Meindl and his colleagues allay that fear.