Home / Information Technology / pinMOS: Novel memory device can be written on and read out optically or electrically
27.11.2019

pinMOS: Novel memory device can be written on and read out optically or electrically 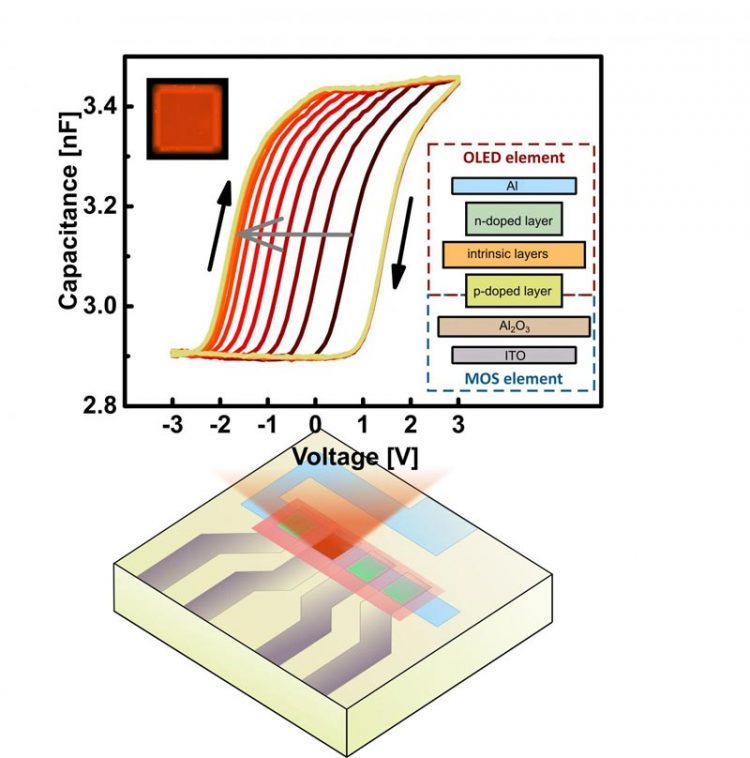 The pinMOS memory - an organic semiconductor device resulting from the combination of an OLED and a capacitor. It has the characteristics of a Memcapacitor, interacts with light and can be written and erased step by step. Credit: (c) Yichu Zheng

Another novelty was related to the measurements in the test series: They were carried out exclusively using the innovative “SweepMe!” measuring software, which was developed by an IAPP / cfaed start-up of the same name.

This story began a few way back in 2015. Two cfaed scientists, both experts in the field of organic electronics, were on their way to a conference in Brazil which included a long bus ride to the venue Porto de Galinhas. Plenty of time to talk.

And so it happens that one of the two – Prof. Stefan Mannsfeld (Chair of Organic Devices, cfaed / IAPP) – shared the idea with the other one – Dr. Axel Fischer (Chair of Organic Semiconductors, IAPP) – that had kept him busy for a while already:

The combination of a conventional organic light-emitting diode (OLEDs) with an insulator layer would have to result in a storage unit due to the specific physical effects of the materials used, which could be written on and read out using both light and electrical signals: a misappropriated use of the OLED technology so to speak.

As it turned out, the two were a perfect match – Dr. Fischer confirmed that the necessary technologies and experience were already available at the IAPP – and so the investigation of this idea was only a matter of time. Yichu Zheng at Prof. Mannsfeld's chair was a suitable candidate to dedicate her doctoral thesis to this topic.

Storing and reading – with light and electricity

The results of this work are available now and have just been published in the journal Advanced Functional Materials. The scientists describe a new type of programmable organic capacitive memory, which is a combination of an OLED and a MOS capacitor (MOS = metal oxide semiconductor).

The storage unit called “pinMOS” is a non-volatile memcapacitor with high repeatability and reproducibility. The special feature is that pinMOS is able to store several states, since charges can be added or removed in controllable amounts. Another attractive feature is that this simple diode-based memory can be both electrically and optically written to and read from. Currently, a lifetime of more than 104 read-write erase cycles is achieved, and the memory states can be maintained and differentiated over 24 hours.

The results show that the pinMOS memory principle as a reliable capacitive storage medium is promising for future applications in electronic and photonic circuits such as neuromorphic computers or visual storage systems. The co-authors of the Weierstraß Institute Berlin (WIAS) were able to contribute to the precise interpretation of the functional mechanism by performing drift diffusion simulations.

A diode-capacitor memory was first presented in 1952 by Arthur W. Holt at an ACM conference in Canada, but only now this concept is being revived by the use of organic semiconductors, since all functions of a discrete connection of diodes and capacitor can be integrated into a single memory cell.

Measuring with SweepMe! – innovative approach for the laboratory

All measurements within this study were performed with the new laboratory measurement software “SweepMe! This software has been developed by a start-up, which is a spin-off from TU Dresden. The physicists Axel Fischer and Felix Kaschura who received their PhD's from TUD founded SweepMe! in 2018 at the IAPP.

This study proved how versatile SweepMe! can be. Whether the measurement of voltage-dependent and time-dependent capacitances, the creation of current-voltage characteristics, the combination of signal generator and oscilloscope or the processing of images from an industrial camera – everything was implemented with only this one software. Even sophisticated parameter variations, which would normally require considerable programming effort, could be implemented in a very short time. Since October 2019 SweepMe! is available worldwide free of charge.

Download: https://bit.ly/35rkE24
Author: Yichu Zheng
Caption: “The pinMOS memory – an organic semiconductor device resulting from the combination of an OLED and a capacitor. It has the characteristics of a Memcapacitor, interacts with light and can be written and erased step by step”.

cfaed is a research cluster at TU Dresden (TUD). As an interdisciplinary research center for perspectives of electronics it is located at the TUD as the central scientific unit, but also integrates nine non-university research institutions in Saxony as well as TU Chemnitz as cooperating institutes. With its vision, the cluster aims to shape the future of electronics and initiate revolutionary new applications, such as electronics that do not require boot time, are capable of THz imaging, or support complex biosensor technology. These innovations make conceivable performance improvements and applications that would not be possible with the continuation of today's silicon chip-based technology. In order to achieve its goals, cfaed combines the thirst for knowledge of the natural sciences with the innovative power of engineering.