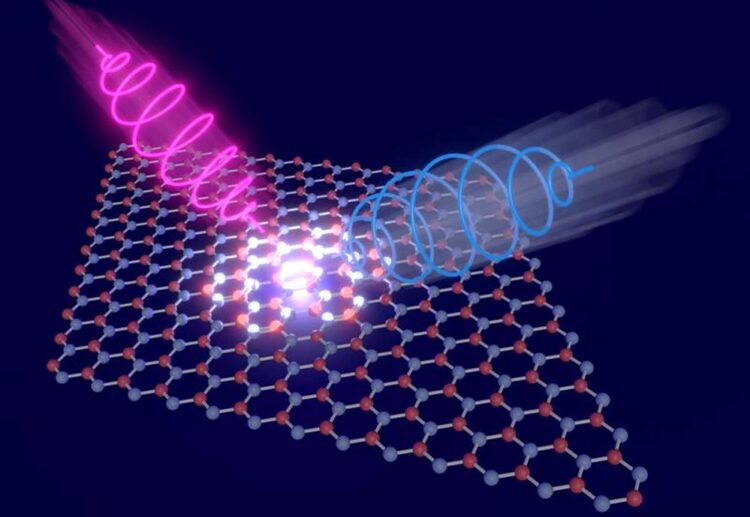 A magnetic material is exposed to two laser beams whose electric fields turn in opposite directions. If there is a difference between the intensity of the scattered light from the two beams, the material is in a topological phase.
Credit: Jörg Harms, MPSD

Much recent research has focused on ‘topological’ materials – an intriguing type of solids which fall outside the standard classification into insulators and conductors. While their bulk is insulating, these phases are characterized by electrically conducting channels which appear at their edges. These resulting so-called topological phases are expected to play an important role in the future development of stable IT and large-scale quantum computing devices.

Topological phases are not restricted to electronic systems. They can also occur in magnetic materials whose properties are described in terms of magnetic waves – or so-called magnons. However, even though scientists have established techniques to generate and read out magnon currents, they have so far been unable to directly ascertain a magnon topological phase. Now researchers in Germany and the United States propose that the presence of such phases can be directly verified by measuring the light scattered off a magnetic material. Their work has been published in Physical Review Letters (PRL).

Just like a sound wave travels through the air, a magnon can travel through a magnetic material by creating a disturbance in its magnetic order. That order can be imagined as a collection of spinning tops sharing a particular rotation axis. The effect of the wave is the to slightly tip the axes around which the tops are spinning.

A topological magnon phase is associated with channels that can carry a current of magnons along the edges of the sample. Researchers are hopeful that such edge channels can be utilized to carry information in future spintronics devices, analogous to how electric currents are used to transmit signals in electronic devices. However, before such technologies can be realized, scientists need new techniques to validate if a magnetic phase is topological or not.

The technique is easy to deploy and can be extended to other quasiparticles as well, says lead author Emil Viñas Boström: “Raman scattering is a standard experimental technique available in many labs, which is one of the strengths of this proposal. In addition, our results are quite general and apply equally well to other types of systems consisting of phonons, excitons or photons.”

In the long term, the hope is that magnons can be used to construct more sustainable and energy-efficient technological devices: “Utilizing topological magnon currents could potentially reduce the energy consumption of future devices by a factor of about a 1,000 as compared to electronic devices – although there are plenty of issues to be resolved until we get to that point,” says Viñas Boström.

The team included researchers from the Max Planck Institute for the Structure and Dynamics of Matter in Hamburg, the MPI for the Science of Light in Erlangen, the University of Greifswald and RWTH Aachen (all in Germany), as well as Columbia University and the Center for Computational Quantum Physics at the Flatiron Institute in the United States.