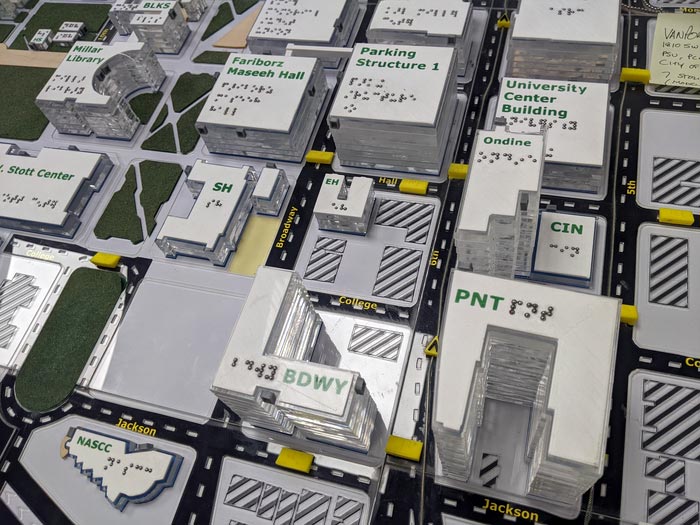 Navigating an unfamiliar place is uniquely challenging for people with disabilities. People with blindness, deafblindness, visual impairment or low vision, as well as those who use wheelchairs, can travel more independently in urban areas with the aid of effective wayfinding technology. A new report from the National Institute for Transportation and Communities (NITC) explores how to leverage low-cost methods to enable people to more easily move through public, urban indoor and outdoor spaces.

The study, led by Martin Swobodzinski and Amy Parker of Portland State University, used focus groups, two case studies, and an in-person structured wayfinding experience on the PSU campus to find the most helpful ways of getting around. Tactile maps were found to be a very useful resource, with an accessible mobile app also showing promise as an orientation and mobility aid.

The researcher will share more details about this project in a free webinar on December 15: Individual Wayfinding in the Context of Visual Impairment, Blindness, and Deafblindness.

WHY IS THIS RESEARCH IMPORTANT?

Environments and wayfinding tools that support safe, confident mobility have been linked with improved employment outcomes, more access to higher education, and better quality of life. The results from this study improve our understanding of how people with visual impairment and blindness find their way through the world. Researchers are hopeful that the insights from the study will support the development of standards and innovation in mobile wayfinding as it relates to the integration of indoor and outdoor wayfinding, and routing for visually impaired, blind, and deafblind pedestrian travelers.

Despite the proliferation of wayfinding apps that are meant to benefit travelers, the effectiveness of such tools remains limited. This study gave voice to the experience of diverse travelers who use wayfinding technologies to accomplish important life tasks. In addition to the findings discussed in more detail below, researchers hope the analysis of the remaining data will drive forward a better understanding of the information needs of visually impaired, blind, and deafblind pedestrian travelers.

College campuses are notoriously complex to navigate, particularly for travelers with visual impairments. One of the key barriers for culturally and linguistically diverse people in accessing higher education is seeing themselves as full members of a college campus community. As a public university situated in the heart of downtown Portland, the PSU campus was an ideal setting for this experiment as it affords realistic wayfinding scenarios and mobility challenges in a public urban environment. In addition, PSU’s commitment to community service, equity, and inclusivity align with the project’s goals of promoting community participation and access.

The researchers began with a review of the existing literature on the topic: Wayfinding tools for people with visual impairments in real-world settings: A literature review of recent studies.

A second case study involved a traveler with combined vision and hearing loss, who also had professional experience as an O&M specialist serving those with visual impairments across multiple states. This participant’s occupational and personal experiences were helpful to the research team in further refining their testing protocol. The original goal of the project had been to compare three methods of wayfinding assistance: tactile maps, verbal directions, and “GoodMaps,” an accessible navigation app for iPhone and Android. In accordance with the insights from this participant, the researchers eliminated verbal directions from the next phase of the experiment.

In a larger experiment, participants were invited to partake in a series of wayfinding tasks, navigating three short routes on campus with both indoor and outdoor elements. Accompanied by an experimenter with professional experience in Orientation and Mobility, participants were asked to travel two different routes while using one of two possible wayfinding supports: a tactile map for one route, and the GoodMaps mobile app for the other.

A total of 28 people participated in the main data collection phase of the study and completed the experiment: 21 adolescents (between the ages of 14 and 18) and seven adults. Participants included people of color, LGBTQIA+ individuals, and people with varying levels of visual impairments. The immediate next step for the research team is consolidating individual-level data for each of the 28 participants, and coding and assessing their observed wayfinding behavior and performance. While data analysis is still in progress for the 28 participants, early findings from the two case studies indicate that the tactile map afforded the most effective wayfinding support.

The research team conducted two focus groups, one with eight blind or visually impaired adults who did not have any hearing loss, and another with nine deafblind participants who use Tactile American Sign Language or close-range visual American Sign Language. Collective themes from the two focus groups included both the hope and promise of wayfinding apps for offering greater environmental literacy during real-world travel, and the limitations of using such apps.

Both groups expressed the need for apps to be designed in collaboration with travelers with visual impairments, because of the apps’ unique limitations in dynamic travel conditions. A specific theme that emerged amongst visually impaired travelers was that they have to use multiple apps to complete a single route, because each app is useful for a subset of wayfinding tasks.

Further description of the findings from the focus group with deafblind participants is provided in the open-access Frontiers in Education article: The use of wayfinding apps by deafblind travelers in an urban environment: Insights from focus groups.

This study is a product of several innovative partnerships. The lead researcher on the project, Martin Swobodzinski, is an associate professor of geography at PSU specializing in human wayfinding, spatial knowledge acquisition, accessibility, and human-computer interaction. In 2017 he and Amy Parker of PSU’s Special Education Department began this work by collaborating on a NITC Small Starts project: Electronic Wayfinding for Visually Impaired Travelers: Limitations and Opportunities. The current project expands upon that research.

Parker is the coordinator of PSU’s Orientation and Mobility Program, a program for preparing orientation and mobility (O&M) specialists which launched in 2017. The program has spearheaded several initiatives including interactive O&M workshops in partnership with TriMet and a new conference in Portland, the Mobility Matters Summit, held for its fifth year in 2022.

In May 2021, the GoodMaps team began scanning PSU’s Smith Memorial Student Union onsite using Lidar equipment. In November of that year, GoodMaps collaborated with PSU’s Disability Resource Center to host interested students and staff with visual impairments to informally evaluate the technology installation within SMSU. In December 2021, the refined version of the GoodMaps installation was ready for research participants to evaluate.

The Digital City Testbed Center (DCTC) at Portland State University works towards establishing a network of campuses in the Pacific Northwest where smart city technologies can be tested before being deployed in communities at large. DCTC’s support of this project allowed the hiring of a graduate research assistant, Julie Wright, who contributed to the achievement of project milestones and the creation of project deliverables.

This research was funded by the National Institute for Transportation and Communities, with additional support from Portland State University, the PSU Digital City Testbed Center, and the American Printing House for the Blind.

Seamless Wayfinding by Individuals with Functional Disability in Indoor and Outdoor Spaces: An Investigation into Lived Experiences, Data Needs, and Technology Requirements

To learn more about this and other NITC research, sign up for our monthly research newsletter.