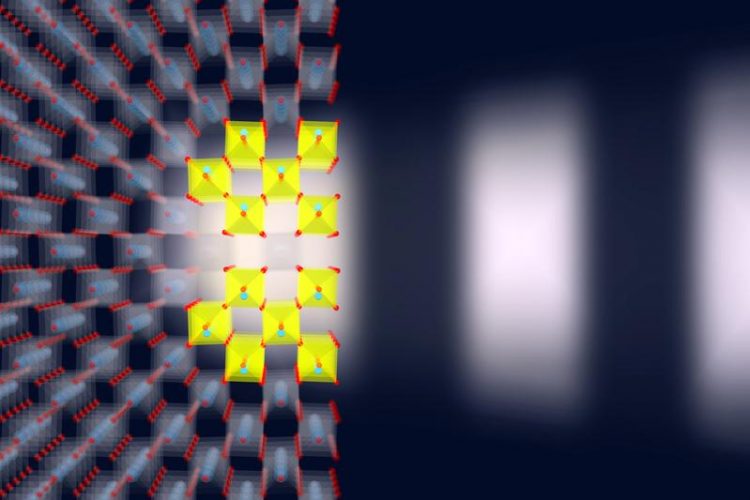 Ultrashort terahertz pulses create a ferroelectric phase in the paraelectric strontium titanate. An optically-induced deformation of the sample results in pairs of flexoelectric domains with opposing polarisations. © Jörg Harms / MPSD

Ferroelectricity is a state in which the constituent lattice “looks” in one specific direction, forming a macroscopic electrical polarisation. The ability to reverse such a polarisation makes ferroelectric materials particularly suitable for digital information encoding and processing.

The discovery of a light-induced ferroelectric is highly relevant for a new generation of high-speed devices, and is presented today in the journal Science.

Such competition leads then to a compromise, but one that is not unique and is often in precarious equilibrium. Hence, moderate perturbations, for example irradiating one such material with light, can induce radical changes in the properties of the solid.

Ultra-short terahertz laser pulses are especially useful because they couple directly to the crystal lattice and can deform atomic arrangements at high speeds. Coherent excitation of lattice vibrations has been shown in the past to cause changes of electrical properties or magnetic arrangements in a number of complex materials, including superconductors.

In their latest research, the scientists describe how they induced a ferroelectric order in a material, a property of solids that can be highly relevant to applications. Ferroelectricity describes the spontaneous alignment of electric dipoles, which leads to a macroscopic polarisation akin to the magnetisation in a ferromagnet.

Generally, ferroelectricity only occurs in a limited class of materials; however, the Hamburg group has discovered that even non-ferroelectric materials can be forced into a ferroelectric phase by light.

Strontium titanate (STO) is paraelectric at all temperatures and a long-range ferroelectric order never develops. Upon exciting vibrations in STO by light, the researchers observed characteristics in its optical and electrical responses typical of ferroelectricity. The origin of this surprising effect lies in the nonlinear nature of the crystal lattice.

The driven phonon delivers some of its energy in the form of pressure to the solid, resulting in a spatially varying structural deformation within the excited area. In these conditions, a material property called flexoelectricity can be activated, resulting in a macroscopic polarisation.

Strikingly, the photo-induced state was found to survive for hours after being created, showing that the material transitioned to a new quasi-stable phase.

“The ability to induce and control ferroelectric states with light on ultrafast timescales could provide the basis for next-generation technologies”, says Tobia Nova, first author of the paper. Ferroelectric materials are already at the core of devices in development, which exploit their spontaneous polarisation to make stable memory chips or “always on” computers.

Because the light-induced ferroelectric phase demonstrated in the Hamburg experiment operates at terahertz frequencies, electro-optic devices that work at such high speeds might be envisioned. Moreover, since flexoelectricity is a common material property, the ability to induce ultrafast flexoelectric polarizations extends far beyond the specific example of STO. Lastly, because STO is routinely used as a substrate in complex heterostructures, the optical access to flexoelectric polarizations should find extensive applications in the manipulation of collective phenomena at interfaces.

This work was made possible by the ERC Synergy Grant “Frontiers in Quantum Materials’ Control” (Q-MAC) and The Hamburg Centre for Ultrafast Imaging (CUI). The Center for Free-Electron Laser Science (CFEL) is a joint enterprise of DESY, the Max Planck Society and the University of Hamburg.