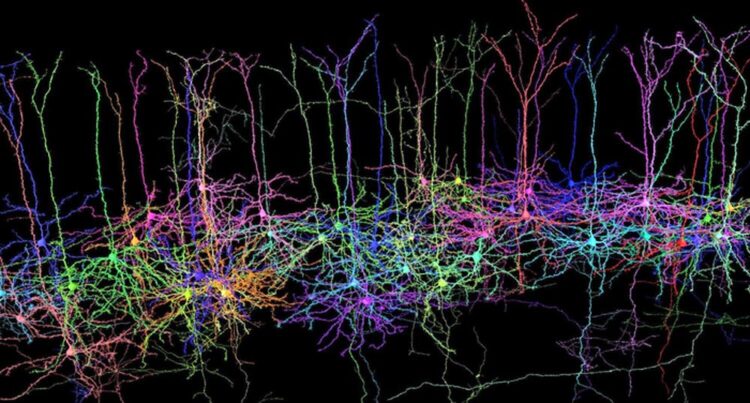 Ecker and his team want to develop machine learning techniques to describe the shape and function of neurons in the cerebral cortex and find out how the shape relates to the function.
Credit: MICrONS Consortium

The computational neuroscientist Professor Alexander Ecker from the University of Göttingen and the Max Planck Institute for Dynamics and Self-Organization (MPIDS) has received a Starting Grant from the European Research Council (ERC). The ERC has awarded his project “Deep Neuron Embeddings: Data-driven multi-modal discovery of cell types in the neocortex” a total of 1.5 million euros over five years. Ecker and his team want to find out how the shape of a neuron in the cerebral cortex relates to its function.

“Form follows function” – this principle, which later formed the basis of the Bauhaus style, was proclaimed by the early 20th century architect Louis Sullivan to be a universal law of nature. “Whether this also applies to the brain, however, is currently unknown,” says Ecker, describing the background to his work. “For example, it is not yet clear exactly how the shape and function of the neurons in the cerebral cortex are related.” Building upon recent scientific advances, Ecker and his team can now address this question. For a long time, it was only possible to measure either the morphology (shape) of a neuron or its functional activity, but not both at the same time.

Cortical neurons exhibit a wide diversity of shapes with complex branching patterns and other morphological features. Similarly, they exhibit a lot of diversity in how they process stimuli during visual perception. To find out how features of a neuron’s shape relate to its role in sensory information processing, complex mathematical descriptions are necessary. The team draws upon a large dataset from an earlier collaboration funded by the US Brain Initiative, which investigated the anatomy and activity of about 100,000 neurons of the visual cortex of a mouse. With the help of the ERC funding, the scientists want to develop machine-learning methods to describe both the neurons’ shape and their function mathematically, recognise patterns in the data, and relate their form and function to each other.

This enormous challenge is also made possible by the interaction between a number of research institutions across the Göttingen Campus. Ecker has been Professor of Data Science at Göttingen University since 2019 and is also a Max Planck Fellow at the MPI for Dynamics and Self-Organization. At the University, he holds his professorship at the Institute of Computer Science and also serves as a board member of the Campus Institute Data Science (CIDAS), the interface for collaboration in the field of Data Science at the Göttingen Campus. Ecker completed his computer science studies at the University of Tübingen, followed by a PhD carried out as part of a collaboration with Baylor College of Medicine in Houston (USA) and subsequent work as a group leader, also in Tübingen.

In addition to Ecker, three other scientists at the Göttingen Campus were successful in this round of awards: Dr Raymundo Báez-Mendoza and Dr Michael Heide from the German Primate Center – Leibniz Institute for Primate Research, and Dr Lakshmi Pradeep Chitta from the Max Planck Institute for Solar System Research in Göttingen also each received ERC Starting Grants. “I congratulate all four Göttingen Campus ERC grant-winners on this outstanding award,” said University President Professor Metin Tolan.

The European Union’s ERC Starting Grants support outstanding early career researchers in building and developing their scientific careers. The funding is provided to enable them to develop an independent scientific profile and pursue innovative ideas.