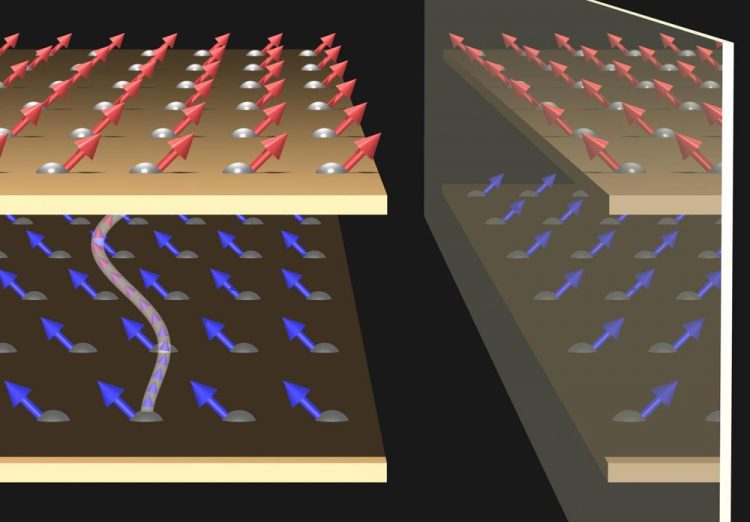 The spins (red and blue arrows) in distant magnetic layers can couple due to the discovered long-range interaction, which is illustrated as a white string connecting two spins. This coupling leads to a clockwise canting between the spins in the two layers. Its depicted mirror image with the opposite sense of canting is not found in the considered systems. Credit: Forschungszentrum Jülich / Jan-Philipp Hanke

Magnetic solids form the foundation of modern information technology. For example, these materials are ubiquitous in memories such as hard disk drives. Functionality and efficiency of these devices is determined by the physical properties of the magnetic solids.

The latter originate from the “concert of spins” – the interactions between microscopically small magnetic moments within the material. Understanding and directing this concert is a fundamental question for both research and applications.

Two magnetic materials can influence each other over long distances even if they are not in direct contact. In the past, such a long-range interaction has been observed, for example, in heterostructures of magnetic iron layers that are separated by a thin chromium spacer.

A unique fingerprint of the so-called interlayer coupling is the parallel or antiparallel alignment of the magnetic moments in the iron layers.

This phenomenon is technologically important since the electrical resistance of the two possible configurations is drastically different – which is known as giant magnetoresistance effect.

It is used in operating magnetic memories and sensors, and in 2007 the Nobel Prize in Physics was awarded jointly to Peter Grünberg and Albert Fert for their discovery.

A group of scientists has now extended this “concert of spins” by a new type of long-range interlayer coupling. They report in the journal Nature Materials that the discovered interaction leads to a special configuration of the magnetic moments, which is neither parallel nor antiparallel but has a specific chirality.

This means that the resulting arrangement of spins is not identical to its mirror image – just like our left hand is different from our right hand.

Such chiral interactions in crystals are very rare in nature. Using theoretical simulations on the supercomputer JURECA in Jülich, the researchers identified the interplay between the crystal structure and relativistic effects as origin of the observed chiral interlayer coupling.

This flavor of the “concert of spins” offers novel opportunities for engineering complex magnetic configurations that could be useful to store and process data more efficiently in the future.