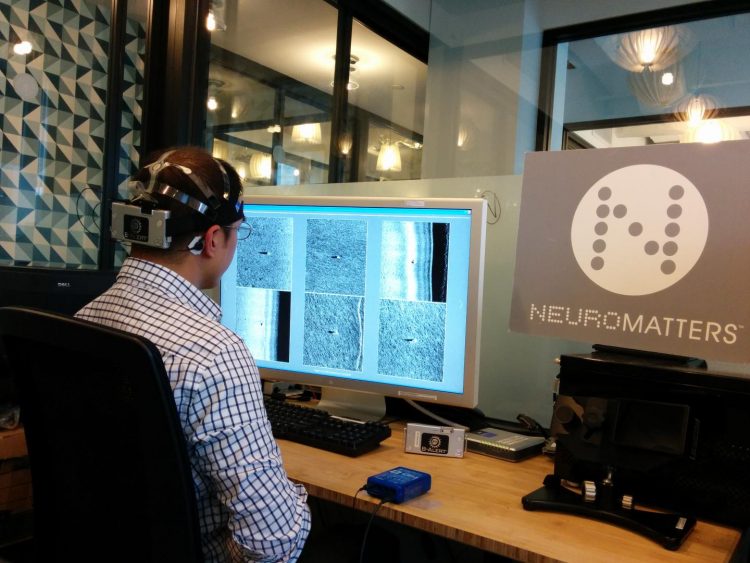 Subjects in the study viewed images while wearing an EEG headset. Credit: Neuromatters

“Computer vision and human vision each have their specific strengths, which combine to work well together,” said Ryan Kastner, a professor of computer science at the Jacobs School of Engineering at UC San Diego.

“For instance, computers are very good at finding subtle, but mathematically precise patterns while people have the ability to reason about things in a more holistic manner, to see the big picture. We show here that there is great potential to combine these approaches to improve performance.”

Researchers worked with the U.S. Navy's Space and Naval Warfare Systems Center Pacific (SSC Pacific) in San Diego to collect a dataset of 450 sonar images containing 150 inert, bright-orange mines placed in test fields in San Diego Bay. An image dataset was collected with an underwater vehicle equipped with sonar. In addition, researchers trained their computer vision algorithms on a data set of 975 images of mine-like objects.

They then showed the results to subjects outfitted with an electroencephalogram (EEG) system, programmed to detect brain activity that showed subjects reacted to an image because it contained a salient feature–likely a mine. Subjects detected mines much faster when the images had already been processed by the algorithms. Computer scientists published their results recently in the IEEE Journal of Oceanic Engineering.

Researchers took several versions of the dataset generated by the classifier and ran it by six subjects outfitted with the EEG gear, which had been first calibrated for each subject. It turns out that subjects performed best on the data set containing the most conservative results generated by the computer vision algorithms. They sifted through a total of 3,400 image chips sized at 100 by 50 pixels.

Each chip was shown to the subject for only 1/5 of a second (0.2 seconds) –just enough for the EEG-related algorithms to determine whether subject's brain signals showed that they saw anything of interest.

“Human perception can do things that we can't come close to doing with computer vision,” said Chris Barngrover, who earned a computer science Ph.D. in Kastner's research group and is currently working at SSC Pacific. “But computer vision doesn't get tired or stressed. So it seemed natural for us to combine the two.”

In addition to Barngrover and Kastner, co-authors on the paper include Paul DeGuzman, a program manager at Neuromatters LLC, and Alric Althoff, a Ph.D. student in computer science at the Jacobs School of Engineering at UC San Diego. Neuromatters is a pioneer in brain-computer interface technologies with their C3Vision™ system, which was adapted for use in this project. The researchers also would like to thank Advanced Brain Monitoring, a medical devices company, for the use of the company's EEG headset.