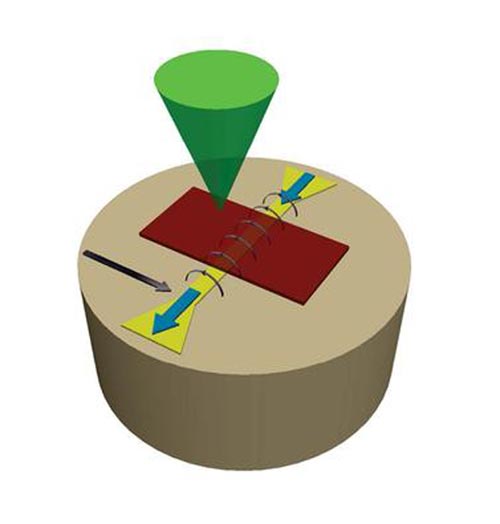 Data transmission that works by means of magnetic waves instead of electric currents – for many scientists, this is the basis of future technologies that will make transmission faster and individual components smaller and more energy-efficient. Magnons, the particles of magnetism, serve as moving information carriers.

Almost 15 years ago, researchers at the University of Münster succeeded for the first time in achieving a novel quantum state of magnons at room temperature – a Bose-Einstein condensate of magnetic particles, also known as a “superatome”, i.e. an extreme state of matter that usually occurs only at very low temperatures.

Since then, it has been noticeable that this Bose-Einstein condensate remains spatially stable – although the theory predicted that condensate of magnons, which are attractive particles, should collapse.

In a recent study, the researchers have now shown for the first time that the magnons within the condensate behave in a repulsive manner, which leads to the stabilization of the condensate. “In this way, we are resolving a long-standing contradiction between the theory and the experiment,” says Prof. Sergej O. Demokritov who led the study.

The results may be relevant for the development of future information technologies. The study was published in the journal “Nature Communications”.

What is special about the Bose-Einstein condensate is that the particles in this system do not differ from each other and are predominantly in the same quantum mechanical state. The state can therefore be described by a single wave function.

This results, for example, in properties such as superfluidity, which is characterized by its zero dissipation during the motion of the condensate at low temperatures. The Bose-Einstein condensate of magnons is so far one of the few so-called macroscopic quantum phenomena that could be observed at room temperature.

Previously, the processes in the condensate had been studied exclusively in homogeneous magnetic fields – i.e. in magnetic fields that are equally strong at every point and in which the field lines point uniformly in one direction.

As previously, using a microwave resonator, which generated fields with frequencies in the microwave range, the researchers excited magnons forming a Bose-Einstein condensate. In the current experiment, they, however, introduced an additional so-called potential well, which corresponds to inhomogeneous static magnetic field, which creates forces acting on the condensate. This enabled the scientists to directly observe the interaction of the magnons in the condensate.

For this purpose, they used a method of Brillouin light scattering spectroscopy. This involved recording the local density of the magnons with probing laser light focused on the surface of the sample. On this way, the researchers recorded the spatial redistribution of the condensate density at different experimental conditions. The collected data allowed to draw the firm conclusion that the magnons in the condensate interact in a repulsive manner, thereby keeping the condensate stable.

In addition, the researchers observed two characteristic times of dissipation, i.e. dissipation of energy and momentum from the condensate to other states. The time of momentum dissipation – the momentum describes the mechanical state of motion of a physical object – proved to be very long. “This may be the first experimental evidence for possible magnetic superfluidity at room temperature,” emphasizes Sergej Demokritov.

Up to now, the use of condensates from magnetic particles has been made difficult mainly by the short lifetime of the condensate. “Our realization of moving condensate and investigation of magnon transport as well as discovery of two different times show that the life-time has nothing to do with the momentum dissipation of the moving condensate,” says first author Dr. Igor Borisenko. The results could therefore open new perspectives for magnon applications in future information technologies.