Scientists examine how a gut infection may produce chronic symptoms 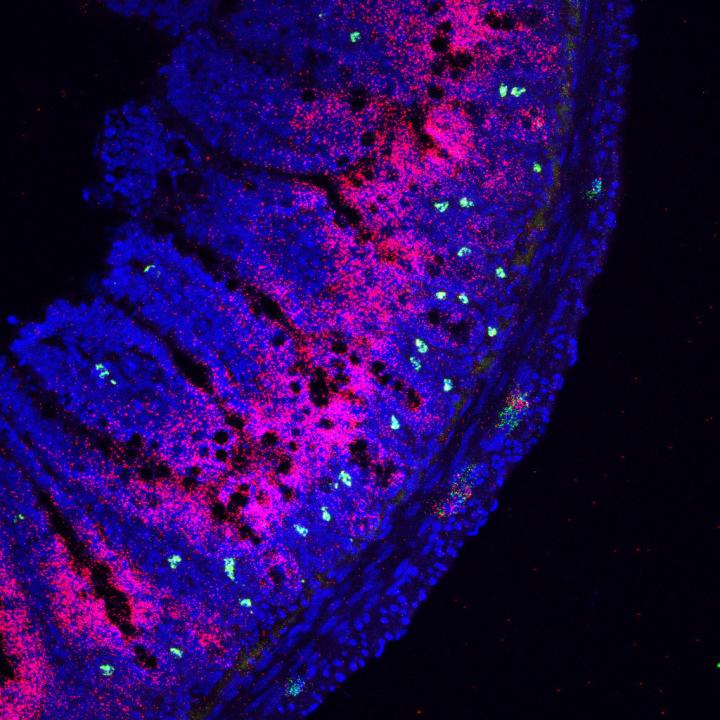 Along the edge of the small intestine, neurons (green) appear in close proximity to the inflammatory molecule Nlrp6 (pink). Credit: Laboratory of Mucosal Immunology Usage Restrictions: This image may only be used to illustrate research described in the accompanying release.

Scientists aren't sure exactly how this happens, but some think an infection may contribute to IBS by damaging the gut nervous system. A new Rockefeller study takes a close look at why neurons in the gut die and how the immune system normally protects them.

Conducted with mice, the experiments described recently in Cell offer insight on IBS and could point toward potential new treatment approaches.

In a healthy gut, the immune system must strike a careful balance between responding to threats and keeping that response in check to avoid damage.

“Inflammation helps the gut ward off an infection, but too much of it can cause lasting harm,” says Daniel Mucida, an associate professor and head of the Laboratory of Mucosal Immunology. “Our work explores the complex mechanisms that prevent inflammatory responses from destroying neurons.”

To understand the effects of an infection on the nervous system, Mucida and his colleagues gave mice a weakened form of Salmonella, a bacterium that causes food poisoning, and analyzed neurons within the intestine.

They found that infection induced a long-lasting reduction of neurons, an effect they attributed to the fact these cells express two genes, Nlrp6 and Caspase 11, which can contribute to a specific type of inflammatory response.

This response, in turn, can ultimately prompt the cells to undergo a form of programmed cell death. When the researchers manipulated mice to eliminate these genes specifically in neurons, they saw a decrease in the number of neurons expiring.

“This mechanism of cell death has been documented in other types of cells, but never before in neurons,” says Fanny Matheis, a graduate student in the lab. “We believe these gut neurons may be the only ones to die this way.”

Macrophages to the rescue

It's not yet clear exactly how inflammation causes neurons to commit cell suicide, yet the scientists already have clues suggesting it might be possible to interfere with the process. The key may be a specialized set of gut immune cells, known as muscularis macrophages.

Previous work in Mucida's lab has shown that these cells express inflammation-fighting genes and collaborate with the neurons to keep food moving through the digestive tract.

If these neurons die off, as happens in an infection, a possible result is constipation–one of a number of unpleasant IBS symptoms. In their recent report, the team demonstrate how macrophages come to the neurons' aid during an infection, ameliorating this aspect of the disorder.

Their experiments revealed that macrophages possess a certain type of receptor molecule that receives stress signals released by another set of neurons in response to an infection. Once activated, this receptor prompts the macrophage to produce molecules called polyamines, which the scientists think might interfere with the cell death process.

Getting back to normal

In other experiments, the researchers found that Salmonella infection alters the community of microbes within the guts of mice–and when they restored the animals' intestinal flora back to normal, the neurons recovered.

“Using what we learned about the macrophages, one could think about ways to disrupt the inflammatory process that kills the neurons,” says Paul Muller, a postdoctoral fellow in the lab.

For instance, it might be possible to develop better treatments for IBS that work by boosting polyamine production, perhaps through diet, or by restoring gut microbial communities.

Since short-term stress responses also appear to have a protective effect, Muller thinks it may also be helpful to target that system.