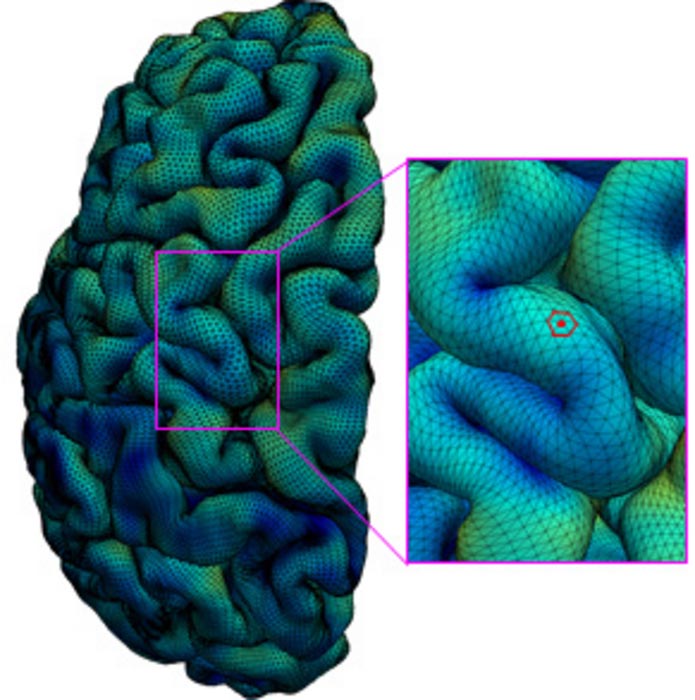 Brain cortical surfaces are represented by triangular meshes. The surface area of each vertex (e.g., the red point) is one third of the total surface area of its one-ring neighboring triangles (the red hexagon).
Credit: UNC School of Medicine

Scientists at the UNC School of Medicine used high-resolution MRI data to create a valuable new resource for the study of human brain development at key moments in utero and after birth.

Scientists at the UNC School of Medicine have mapped the surface of the cortex of the young human brain with unprecedented resolution, revealing the development of key functional regions from two months before birth to two years after.

The new cortical development mapping, reported online in the Proceedings of the National Academy of Sciences, represents a valuable resource for further research on brain development and offers a powerful new approach to the study of brain-development conditions such as autism and schizophrenia.

“These results provide an important reference for exploring and understanding the dynamics of early brain development,” said study senior author Gang Li, PhD, associate professor of radiology at the UNC School of Medicine.

The study’s first author was Ying Huang, a PhD candidate in Li’s laboratory.

The cortex is a sheet of brain cells that wraps around much of the rest of the brain. The most evolutionarily advanced brain region, it is proportionately larger in humans than in other mammals, and is responsible for higher, distinctively human functions including language abilities and abstract reasoning.

The third trimester of pregnancy through the first two years of life is the most dynamic period in cortical development. The cortex thickens markedly during this interval, and grows at an even faster pace in terms of surface area, by forming complicated cortical folds.

Disruptions to cortical thickening and expansion in this phase have been linked to autism and schizophrenia. However, neuroscientists haven’t had as detailed an understanding of this developmental phase as they would like. In particular, they’ve had a need for more comprehensive, high-resolution mapping, across the fetal-to-toddler age range, that divides or “parcellates” the developing cortex into distinct regions with their own growth rates – especially surface area growth rates.

In the study, Li and colleagues performed just such a mapping. They first gathered a set of 1,037 high-quality magnetic resonance imaging (MRI) scans of infants in the third-trimester-to-two-year age interval. The scans came from two other research projects, the UNC/UMN Baby Connectome Project (BCP) and the Developing Human Connectome Project. The team analyzed the scan data using state-of-the-art, computer-based image-processing methods, essentially dividing the cortical surface into a virtual mesh containing thousands of tiny circular areas, and calculating the surface expansion rate for each of these areas.

The analysis didn’t start with assumptions about the locations of brain structures or functional regions, but this regionalization of the brain became evident anyway from the resulting maps, based solely on the different rates at which areas of the surface expanded. In all, the researchers defined 18 distinct regions, which they found correlated well with what is already known about the developing cortex’s functional regions.

“All these regions show dramatic expansion in surface area during this developmental window, with each region having a distinct trajectory,” Li said.

The maps revealed that each region tended to have the same developmental path as its counterpart in the cortex’s opposite hemisphere. Sex differences were apparent too. Even when controlling for sex differences in overall surface area – male brains having greater area – there remained differences in multiple regions. For example, the medial prefrontal region in the left hemisphere, which is believed to host important functions such as attention and working memory, became proportionately larger in males early in the second year of postnatal life.

All in all, Li said, the mapping provides fundamental new insights into brain development.

He and his team now plan to extend this approach with MRI scan datasets that start at earlier ages and end at older ones. They also hope eventually to study scan datasets covering children who have autism-spectrum or other neurodevelopmental conditions. Such analyses might offer not only clues to the origins of these conditions, but also the identification of early signs or biomarkers, which in the future could be used to administer early and more effective treatments.