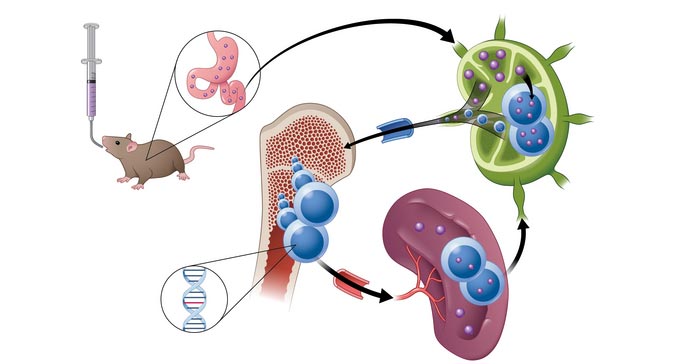 A model demonstrating how this type of novel drug is absorbed through the lymphatic system
Credit: Danielle Dobbs/Michigan Medicine

A team of University of Michigan researchers is developing a new anti-cancer drug that is absorbed through the gut’s lymphatic system rather than blood vessels, potentially outmaneuvering the molecular signaling pathways that lead to drug resistance while increasing cancer-fighting ability and reducing side effects.

In a study published today in Nature Communications, the team reports on a novel kinase inhibitor that significantly reduced disease, limited toxicity and prolonged survival in mice with myelofibrosis, a precursor to acute leukemia.

Cancer treatment often involves combination therapy to target different cancer cell vulnerabilities. But because these drugs circulate through and are absorbed and removed by the body at different rates, it can be challenging to sustain the right therapeutic balance of each individual drug at a concentration necessary to be effective while limiting drug toxicity and side effects, said lead author Brian D. Ross, Ph.D., the Roger A. Berg Research Professor of Radiology at the University of Michigan Medical School.

Failure to strike this balance reduces the effectiveness of the drug combinations against cancer and can lead to drug resistance, as PI3K and MAPK crosstalk can activate downstream pathways to resist therapy. Even if a drug blocks one pathway, another can provide an escape survival pathway to compensate and continue growing.

Unlike traditional oral drugs, which are often designed to be rapidly absorbed into the bloodstream, researchers treating mice with myelofibrosis found that LP-182 is absorbed by the gut’s lymphatic system first. The lymphatic system serves as a storage reservoir, separating the drug from the rest of the body and gradually releasing the therapy into the general circulation over time to maintain drug concentrations at an optimal therapeutic level.

“Within the therapeutic window, we are able to maintain the on-target inhibition of two distinct pathways that are talking to one another,” said Ross, who is also the director of the Center for Molecular Imaging at Michigan Medicine and director of the Preclinical Molecular Imaging Shared Resource at the U-M Rogel Cancer Center. “This demonstrates the feasibility of delivering anti-cancer agents directly into the lymphatic system, which opens tremendous new opportunity for improving cancer therapeutic outcomes and reducing the side effects of the agents themselves.”

The disease spreads through lymphatic tissue, which is also a common route for cancer metastasis, so the findings from Ross and his team may offer new strategies to prevent cancer spread. Furthermore, Ross says, because the gut’s lymphatic system harbors over half the body’s immune cells, the study’s results could provide approaches for the treatment of autoimmune disorders and other conditions.

Ross and his colleagues will continue to expand their pre-clinical studies of LP-182 with the goal of setting up a phase I clinical trial in human patients with myelofibrosis. They are also developing additional lymphatropic targeted kinase inhibitors to treat solid tumors, including breast, brain, gastrointestinal and pancreatic cancers, along with autoimmune diseases such as lupus and multiple sclerosis.

Journal: Nature Communications
DOI: 10.1038/s41467-022-32486-8
Article Title: A lymphatic-absorbed multi-targeted kinase inhibitor for myelofibrosis therapy
Article Publication Date: 17-Aug-2022
COI Statement: Ross and Van Dort are inventors on patents describing the underlying compounds owned by the University of Michigan and may receive royalty payments from the university. Compound patents have been licensed to Lympharma, LLC, a company in which Ross has a financial interest.