Home / Health and Medicine / How low can we go? Nanopore detection of single flu viruses to control outbreaks
22.11.2018

How low can we go? Nanopore detection of single flu viruses to control outbreaks 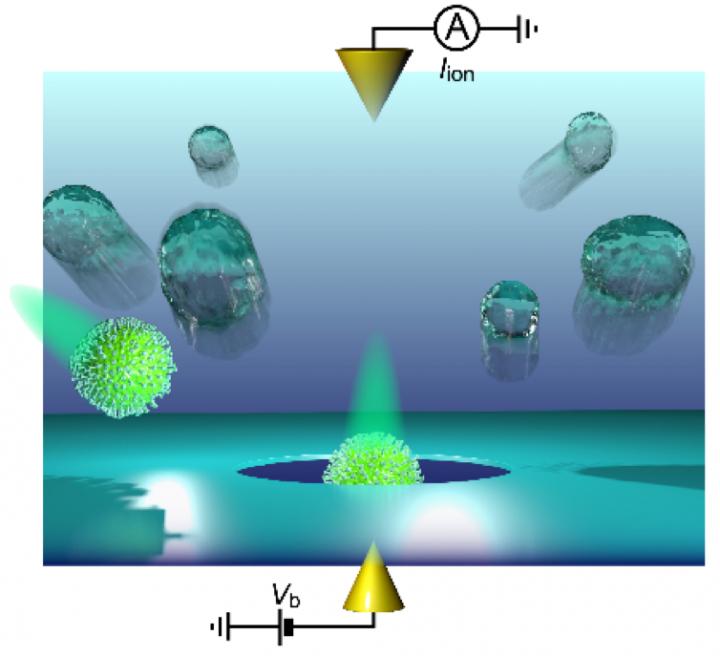 Influenza is a highly contagious respiratory disease of global importance, which causes millions of infections annually with the ever-present risk of a serious outbreak.

Passive vaccination is the only method available for partial control of the virus. Rapid diagnosis of influenza has been explored to prevent outbreaks by enabling medication at very early stages of infection; however, diagnostic sensitivity has not been high enough, until now.

In a new study published in Scientific Reports, a team of researchers led by Osaka University explored the usefulness of combining a single-particle nanopore sensor with artificial intelligence technology, and found that this approach created a new virus typing method that can be used to identify single influenza virions.

Genetic methods can identify many virus species, but require time-intensive processes and specialized staff. Therefore, these methods are unsuitable for point-of-care screening. In a novel approach, the researchers designed a sensor that could assess distinct nanoscale properties of influenza virions within physiological samples.

“We used machine-learning analysis of the electrical signatures of the virions,” says corresponding author Makusu Tsutsui. “Using this artificial intelligence approach to signal analysis, our method can recognize a slight current waveform difference, which cannot be discerned by human eyes. This enables high-precision identification of viruses.”

In testing this sensor, the research team found that electroosmotic flow (liquid motion induced by an electric current across the nanopore) through the pore channel could block the passage of non-virus particles.

This ensured that the only particles evaluated by the sensor were virus particles, regardless of the complexity of the sample that contained those viruses.

“Our testing revealed that this new sensor may be suitable for use in a viral test kit that is both quick and simple,” says lead author Akihide Arima, “Importantly, use of this sensor does not require specialized human expertise, so it can readily be applied as a point-of-care screening approach by a wide variety of healthcare personnel.”

In addition to enabling early detection of influenza, this nanosensor method could be modified to enable early detection of other viral particles. This would enable rapid prevention and tracking for a variety of local epidemics and potential pandemics.

Osaka University was founded in 1931 as one of the seven imperial universities of Japan and now has expanded to one of Japan's leading comprehensive universities.?The University has now embarked on open research revolution from a position as Japan's most innovative university and among the most innovative institutions in the world according to Reuters 2015 Top 100 Innovative Universities and the Nature Index Innovation 2017. The university's ability to innovate from the stage of fundamental research through the creation of useful technology with economic impact stems from its broad disciplinary spectrum.