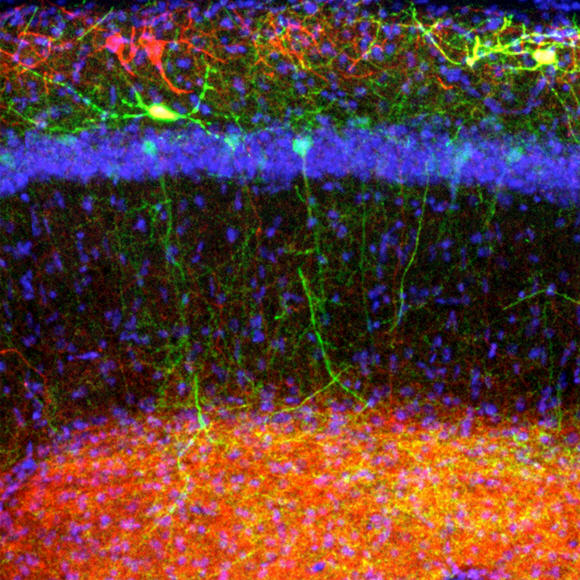 This microscopy image depicts the neuronal network of the hippocampus including O-LM interneurons (red and yellow) and other cell types. The current study shows that interneuron dysfunction may contribute to learning deficits associated with Alzheimer’s disease. Source: DZNE / Julia Steffen

Alzheimer’s disease triggers memory and learning disorders. To date, the causes are poorly understood. Now, researchers of the German Center for Neurodegenerative Diseases (DZNE) are shedding light on a possible mechanism: As Martin Fuhrmann and co-workers describe in the journal “Neuron,” loss of neuronal contacts that release the neurotransmitter acetylcholine impairs the function of specific nerve cells.

The affected “interneurons” regulate activity of the hippocampus, which is considered to be the brain’s memory control center. The results of this study may pave the way for a more effective treatment of memory disorders associated with Alzheimer’s.

Brain cells are interlinked with each other into a freeway for nerve impulses. For this network to work properly, different types of cells have to harmonize to fulfill their tasks. For instance, while some brain cells pass on signals in a way that triggers firing of downstream cells, others slow down signal transmission. “Usually, there is a fine-tuned balance between excitation and inhibition.

It is presumed that this interplay is disturbed by Alzheimer’s,” explains DZNE researcher Dr. Martin Fuhrmann. “This may cause nerve cells to become hyperactive, which leads to discharges that resemble epileptic conditions. In Alzheimer’s disease, the hippocampus is among the first brain areas to be affected and the region where learning and memory processes occur.”

Inhibitory Cells Under the Microscope

Consequently, the Bonn-based neurobiologist and his team colleagues investigated a specific class of neurons that are referred to as “O-LM interneurons”. They act upon other hippocampal neurons and thereby restrain their activity. This effect is called “inhibition.”

To date, little was known on the role these interneurons play in Alzheimer’s disease. Hence, the researcher trained mice – healthy specimen and others who displayed typical symptoms of Alzheimer’s – to recognize a certain environment. Moreover, Fuhrmann and his colleagues used microscopy techniques to track how the interneurons adapted to the learning task.

Usually, during learning existing connections between neurons are modified and new ones created. Indeed, the researchers observed such changes happening at the interneurons of the healthy mice. However, in the rodents that exhibited symptoms of Alzheimer’s, cellular wiring was disturbed and connections were not established in some cases. Besides, these mice had problems to recognize their training environment.

What caused the faulty wiring? The researchers found out that this effect was triggered by the loss of a specific set of cellular connections that normally reach out to the interneurons. “Already in the early stages of Alzheimer’s cholinergic projections degenerate. Their name derives from the fact that they release a neurotransmitter called ‘acetylcholine’,” Fuhrmann says.

“Some of these connections usually link up to the interneurons we investigated. When they get lost this has direct impact on the interneurons. Their cellular wiring becomes dysfunctional, which impairs their ability to inhibit others cells.”

It has long been suspected that memory decline associated with Alzheimer’s may be caused by the loss of cholinergic projections. Reduction of these cellular contacts leads to a deficiency of acetylcholine. Hence, one treatment approach is to counteract the shortage of the neurotransmitter through medication, which turned out to be not successful on the long-term. However, the current work elucidates how acetylcholine might be related to memory function on the cellular level.

“Our study now points to a mechanism that may be relevant for humans. The loss of cholinergic connections impairs the regulating ability of hippocampal interneurons. This worsens memory performance,” Fuhrmann explains. “Looking ahead, these findings could help to develop drugs to treat memory problems caused by Alzheimer’s more effectively than it is possible today.”