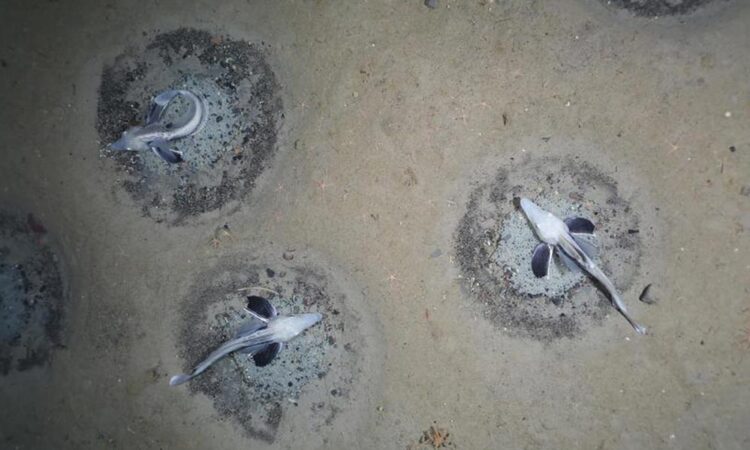 Researchers detect around 60 million nests of Antarctic icefish over a 240 square kilometres area in the Weddell Sea.

Near the Filchner Ice Shelf in the south of the Antarctic Weddell Sea, a research team has found the world’s largest fish breeding area known to date. A towed camera system photographed and filmed thousands of nests of icefish of the species Neopagetopsis ionah on the seabed. The density of the nests and the size of the entire breeding area suggest a total number of about 60 million icefish breeding at the time of observation. These findings provide support for the establishment of a Marine Protected Area in the Atlantic sector of the Southern Ocean. A team led by Autun Purser from the Alfred Wegener Institute publish their results in the current issue of the scientific journal Current Biology.

The joy was great when, in February 2021, researchers viewed numerous fish nests on the monitors aboard the German research vessel Polarstern, which their towed camera system transmitted live to the vessel from the seabed, 535 to 420 metres below the ship, from the seafloor of the Antarctic Weddell Sea. The longer the mission lasted, the more the excitement grew, finally ending in disbelief: nest followed nest, with later precise evaluation showing that there were on average one breeding site per three square metres, with the team even finding a maximum of one to two active nests per square metre.

The mapping of the area suggests a total extent of 240 square kilometres, which is roughly the size of the island of Malta. Extrapolated to this area size, the total number of fish nests was estimated to be about 60 million. “The idea that such a huge breeding area of icefish in the Weddell Sea was previously undiscovered is totally fascinating,” says Autun Purser, deep-sea biologist at the Alfred Wegener Institute, Helmholtz Centre for Polar and Marine Research (AWI) and lead author of the current publication. After all, the Alfred Wegener Institute has been exploring the area with its icebreaker Polarstern since the early 1980s. So far, only individual Neopagetopsis ionah or small clusters of nests have been detected here.

The unique observations are made with a so-called OFOBS, the Ocean Floor Observation and Bathymetry System. It is a camera sledge built to survey the seafloor of extreme environments, like ice-covered seas. It is towed on a special fibre-optic and power cable normally at a speed of about one half to one knot, about one and half metres above the seafloor. “After the spectacular discovery of the many fish nests, we thought about a strategy on board to find out how large the breeding area was – there was literally no end in sight. The nests are three quarters of a metre in diameter – so they are much larger than the structures and creatures, some of which are only centimetres in size, that we normally detect with the OFOBS system,” Autun Purser reports. “So, we were able to increase the height above ground to about three metres and the towing speed to a maximum of three knots, thus multiplying the area investigated. We covered an area of 45,600 square metres and counted an incredible 16,160 fish nests on the photo and video footage,” says the AWI expert.

Based on the images, the team was able to clearly identify the round fish nests, about 15 centimetres deep and 75 centimetres in diameter, which were made distinct from the otherwise muddy seabed by a round central area of small stones. Several types of fish nests were distinguished: “Active” nests, containing between 1,500 and 2,500 eggs and guarded in three-quarters of the cases by an adult icefish of the species Neopagetopsis ionah, or nests which contained only eggs; there were also unused nests, in the vicinity of which either only a fish without eggs could be seen, or a dead fish. The researchers mapped the distribution and density of the nests using OFOBS’s longer-range but lower-resolution side scan sonars, which recorded over 100,000 nests.

The scientists combined their results with oceanographic and biological data. The result: the breeding area corresponds spatially with the inflow of warmer deep water from the Weddell Sea onto the higher shelf. With the help of transmitter equipped seals, the multidisciplinary team was also able to prove that the region is also a popular destination for Weddell seals. 90 per cent of the seals’ diving activities took place within the region of active fish nests, where they presumably go in search of food. No wonder, the researchers calculate the biomass of the ice fish colony there at 60 thousand tonnes.

With its biomass, this huge breeding area is an extremely important ecosystem for the Weddell Sea and, according to current research, likely to be the most spatially extensive contiguous fish breeding colony discovered worldwide to date, the experts report in the publication in Current Biology.

German Federal Research Minister Bettina Stark-Watzinger said: “My congratulations to the researchers involved on their fascinating discovery. After the MOSAiC expedition, German marine and polar research has once more reaffirmed its outstanding position. German research vessels are floating environmental research laboratories. They continue to sail the polar seas and our oceans almost non-stop, serving as platforms for science aimed at generating important findings to support climate and environmental protection. Funding by the Federal Ministry of Education and Research (BMBF) provides German marine and polar research with one of the most state-of-the-art research vessel fleets worldwide. This discovery can make an important contribution towards protecting the Antarctic environment. The BMBF will continue to work towards this goal under the umbrella of the United Nations Decade of Ocean Science for Sustainable Development that runs until 2030.”

For AWI Director and deep-sea biologist Prof. Antje Boetius, the current study is a sign of how urgent it is to establish marine protected areas in Antarctica. “This great discovery was enabled by a specific under-ice survey technology we developed during my ERC Grant. It shows how important it is to be able to investigate unknown ecosystems before we disturb them. Considering how little known the Antarctic Weddell Sea is, this underlines all the more the need of international efforts to establish a Marine Protected Area (MPA),” Antje Boetius classifies the results of the study, in which she was not directly involved. A proposal for such an MPA has been prepared under the lead of the Alfred Wegener Institute and is defended since 2016 by the European Union and its member states as well as other supporting countries in the international Commission for the Conservation of Antarctic Marine Living Resources (CCAMLR).

Antje Boetius adds: “Unfortunately, the Weddell Sea MPA has still not yet been adopted unanimously by CCAMLR. But now that the location of this extraordinary breeding colony is known, Germany and other CCAMLR members should ensure that no fishing and only non-invasive research takes place there in future. So far, the remoteness and difficult sea ice conditions of this southernmost area of the Weddell Sea have protected the area, but with the increasing pressures on the ocean and polar regions, we should be much more ambitious with marine conservation.”

Information Material on the Proposal for a Marine Protected Area in the Antarctic Weddell Sea: https://www.awi.de/en/about-us/service/press/single-view/default-11d138e1cb.html