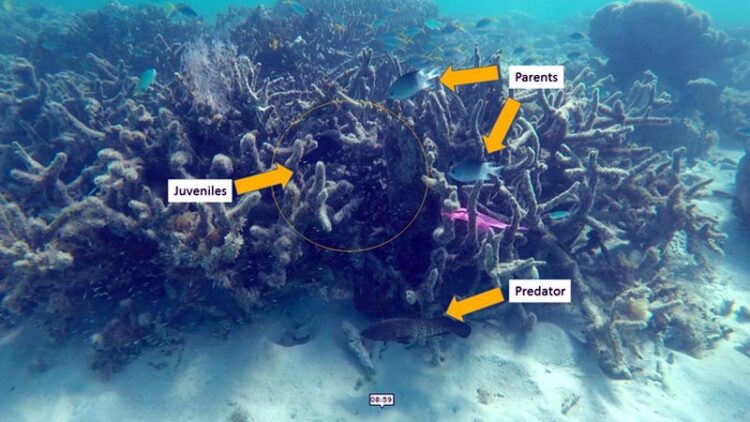 Scientists introduced “traffic calming” on three reefs for an entire breeding season – cutting the number of boats within 100m, and reducing the speed of those within that distance.

They then tracked the breeding of fish called spiny chromis – and found 65% of nests on quieter reefs still contained offspring at the end of the season, compared to 40% on reefs with busy motorboat traffic.

Offspring were larger on quieter reefs and each nest also contained more offspring at the end of the season.

Aquarium tests on the same species show that noise disrupts important parental behaviours – including “fanning” eggs with their fins to ensure oxygen supply.

The research, led by the universities of Exeter and Bristol, was carried out at reefs near Lizard Island Research Station on Australia’s Great Barrier Reef.

“With coral reefs worldwide facing multiple threats, the results of our experiment offer a way to help struggling populations,” said lead author Dr Sophie Nedelec, from the University of Exeter.

“Moving boating channels further away from reefs, driving slowly when approaching reefs, and avoiding anchoring next to reefs provide three simple changes that any boat driver can adopt.

“These solutions put the power in the hands of local people to protect vulnerable ecosystems.”

Dr Nedelec added: “No one has attempted a field experiment like this before.

“We monitored six reefs (three with traffic calming and three without) for a whole summer breeding season, swimming every other day along each reef to monitor the survival of 86 spiny chromis broods in their natural habitat.”

Co-author Dr Laura Velasquez Jimenez, of James Cook University, said: “Since spiny chromis hide their eggs in caves in the reef, the nests are tricky to find before the offspring emerge, so we ran a parallel study in aquariums to study embryonic development.”

In this aquarium study, some spiny chromis parents and eggs were kept with playbacks of natural reef sounds and others were exposed to intermittent boat noise playbacks via speakers.

Co-author Professor Andy Radford, from the University of Bristol, said: “The complementary lab study demonstrated that these improvements to breeding really are due to limiting noise pollution, and not other kinds of disturbance from the boats.”

The combined results suggest that reducing boat noise could have major benefits for populations of reef fish, making reefs more resilient to changes currently being driven by human activity.

Cyclones and bleaching are becoming increasingly common due to climate change, and cause devastation when they strike.

Finding ways to speed up population growth after these destructive events could make the difference between decline or recovery.

However, the team stress that limiting boat traffic won’t be enough to completely protect coral reefs.

Senior author Professor Steve Simpson, from the University of Bristol, said: “We know reefs around the world are in trouble.

“While we try to tackle the biggest threat of climate change, we need simple solutions that reduce local threats.

“Acoustic sanctuaries can build resilience on coral reefs, and help give reefs more chance of recovery.”

The research, by an international team including James Cook University, received funding from the Natural Environment Research Council.