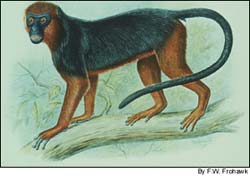 Although there are no known photographs of the now extinct Miss Waldron’s red colobus monkey (Procolobus badius waldroni), this illustration provides a good idea of what it looked like.

After years of searching for a rare African primate, anthropologist Scott McGraw and his colleagues believed that the Miss Waldron’s red colobus monkey, Procolobus badius waldroni, was probably extinct. They had written a paper in 2000 saying so.

But recent hard evidence of the Miss Waldron’s red colobus’ existence has rekindled McGraw’s hopes of finding the primate, reportedly last seen in 1978. McGraw, an associate professor of anthropology at Ohio State University, details the evidence and his continuing search for the elusive monkey in a forthcoming issue of the International Journal of Primatology.

Miss Waldron’s red colobus is a small, black monkey with reddish fur on its forehead and thighs. Researchers think that these primates once lived in large, noisy packs in the canopy rainforests of eastern Ivory Coast and western Ghana. Current evidence suggests that, if the monkey is still alive, it’s range may be limited to the remote southeastern corner of Ivory Coast.

If the monkey were indeed extinct, it would be the first primate to have disappeared in 200 years.

McGraw has spent the better part of a decade traveling to Ivory Coast conducting research on various African monkeys, and always on the lookout for Miss Waldron’s red colobus. To date, he has neither seen nor heard one.

Even so, the last few years have yielded some interesting evidence for McGraw. A year ago, he received a photo of what looks like an adult Miss Waldron’s red colobus – albeit a freshly killed one.

“This is the only known photograph of a Miss Waldron’s red colobus, and it’s dead,” said an exasperated McGraw. “But everyone who knows anything about this primate says it’s definitely a Miss Waldron’s.”

In 2001, again in Ivory Coast, another hunter gave McGraw a black tail from a monkey. Two black-tailed monkey species inhabit the country’s southwestern forests. Subsequent DNA testing proved that the tail did indeed come from a red colobus monkey. Ironically, the hunter said he had shot the animal only a week after McGraw had left the country in 2000.

McGraw has not been to Ivory Coast since the winter of 2002. While the country’s nine-month civil war was declared over last July, tensions remain high as the country remains politically split. McGraw continues to rely on the Ivorian hunters he knows to keep him informed about sightings of Miss Waldron’s red colobus. He’s even offered monetary awards to hunters who hear or see the primate.

That relationship is somewhat tenuous. Hunting is illegal in Ivory Coast, but the laws aren’t enforced, McGraw said. Bush meat has become something of a delicacy, and many people living in the country’s remote areas hunt to eat or sell the meat. Add to that a loss of about 85 percent of the country’s original forest cover, and the outlook for Miss Waldron’s red colobus doesn’t seem very promising.

“When most of the forest is destroyed and the human population skyrockets and the most remote villages get shotguns, we can’t expect to have a good number of these primates around,” said McGraw, who is also an associate professor of evolution, ecology and organismal biology. “But if this monkey is extinct, then something has gone very, very wrong, as primates are pretty resilient.”

McGraw is eager to return to Ivory Coast and start anew the tedious search for Miss Waldron’s red colobus. He and his colleagues are also trying to organize a conservation program in the country to help save animals that are near extinction.

If the monkey is extinct, the ramifications may be felt on a significant number of levels.

“Its extinction may represent the beginning of a wave of extinctions which will make their way across this part of Africa,” McGraw said. “There could be a cascade of disappearances, including all of those animals that are dependent on high-canopy forests. “Since there’s very little canopy area left, this list could include forest elephants, leopards, chimpanzees, and so on.”