Microplastics: Shipwreck and beach as a real-world laboratory 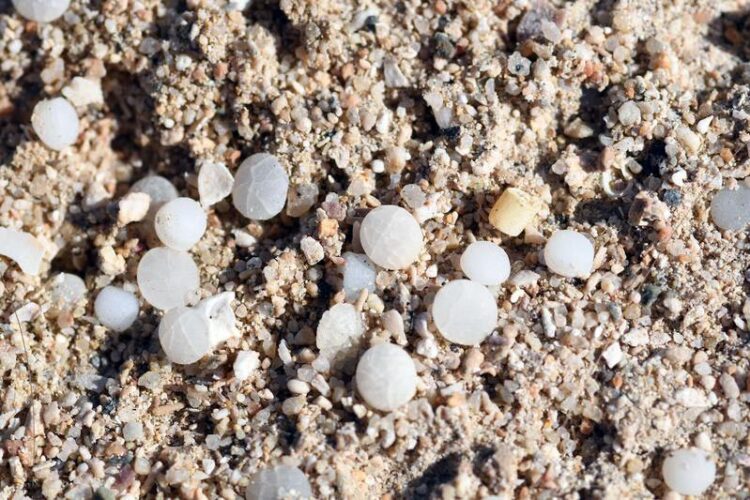 Plastic pellets on the beach: The degradation of the particles is already in full swing.
Credit: University of Stuttgart, WiTUS/Franz Brümmer

Researchers at the University of Stuttgart present long-term study on the degradation of plastic.

It was a shipwreck for the benefit of science. In June 1993, the cargo ship SS Hamada sustained severe damage in heavy seas above a coral reef off the coast of Egypt, broke in two, and sank – fully loaded with plastic granules – in the middle of a nature reserve. But the disaster also offered an opportunity. Some of the plastic pellets washed up on the beach, while the rest remained in the flooded holds of the wreck until today. This provided the first opportunity for researchers to conduct comparative studies on the degradation of the plastic pellets under vastly different conditions.

It had previously been estimated that it would take anywhere between several centuries and several millennia for polyethylene – one of the most common plastics – to be completely degraded in the oceans. However, these figures are subject to considerable uncertainty because the extrapolations are based largely on laboratory tests. “Long-term studies on the degradation of plastic in the oceans have been lacking up to now because, among other things, it is not possible to determine the precise age of the plastic waste,” say Prof. Dr. Franz Brümmer and Uwe Schnepf from the Institute of Biomaterials and Biomolecular Systems (IBBS) at the University of Stuttgart. The two scientists lead a consortium that includes the Scientific Diving Group (WiTUS) and the Institute of Polymer Technology at the University of Stuttgart, the German Aerospace Center (DLR), and an Egyptian cooperation partner. In 2016, plastic pellets were initially collected from both the wreck (during scientific dives) and the beach. The consortium then examined these pellet samples using different methods.

The microscopic, chemical, and mechanical tests quickly revealed major differences with regard to the degradation processes. “While the degradation of the plastic pellets on the beach is already in full swing, the plastic pellets trapped in the wreck at 18 m below water show hardly any signs of degradation,” say Brümmer and Schnepf. The results of the Stuttgart study thus contribute to a better understanding of the influence of various environmental factors such as UV radiation, high temperatures, and large temperature differences on the aging of plastic, thereby providing more accurate knowledge of the degradation of plastics in the ocean.