The ebb and flow of Greenland’s glaciers 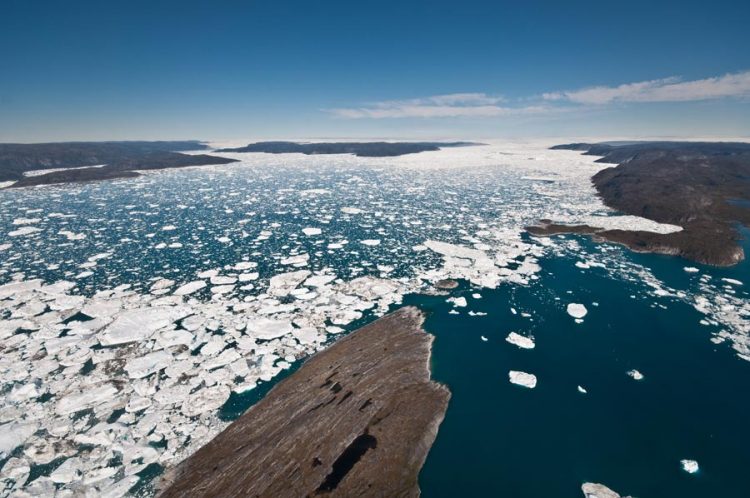 Icebergs choke the fjord where Jakobshavn glacier flows into the sea off western Greenland. A new analysis shows that the mechanisms that drive the seasonal ebb and flow of some Greenland glaciers are different from those driving longer-term trends like overall retreat of glaciers, and faster flows. Lead author of the Journal of Geophysical Research paper, CU-Boulder’s Twila Moon, said she hopes it will help scientists better anticipate how a warming Greenland will contribute to sea level rise. Credit: Ian Joughin, University of Washington.

In northwestern Greenland, glaciers flow from the main ice sheet to the ocean in see-sawing seasonal patterns. The ice generally flows faster in the summer than in winter, and the ends of glaciers, jutting out into the ocean, also advance and retreat with the seasons.

Now, a new analysis shows some important connections between these seasonal patterns, sea ice cover and longer-term trends. Glaciologists hope the findings, accepted for publication in the June issue of the American Geophysical Union’s Journal of Geophysical Research-Earth Surface and available online now, will help them better anticipate how a warming Greenland will contribute to sea level rise.

“Rising sea level can be hard on coastal communities, with higher storm surges, greater flooding and saltwater encroachment on freshwater,” said lead author Twila Moon, a researcher at the National Snow and Ice Data Center (NSIDC). NSIDC is part of the Cooperative Institute for Research in Environmental Sciences (CIRES) at the University of Colorado Boulder.

“We know that sea level will go up in the future,” Moon said. “The challenge is to understand how quickly it will rise, and one element of that is better understanding how Greenland glaciers behave.”

Moon and colleagues from the University of Washington focused on 16 glaciers in northwest Greenland, collecting detailed information on glacier speed, terminus position (the “end” of the glacier in the ocean) and sea ice conditions, during the years 2009-2014.

By contrast, seasonal swings in glacier speed had little to do with sea ice conditions or glacier terminus location. Rather, the speed (velocity) of ice flow is likely responding to changes in the surface melt on top of the ice sheet and the movement of meltwater through and under the ice sheet.

Over the longer-term, however, Moon and her colleagues found a tight relationship between the speed of glaciers and terminus location. When sea ice levels were especially low and glaciers’ toes (termini) retreated more than normal and then didn’t re-advance, the glaciers sped up, moving ice toward the sea more quickly. While low sea ice is likely not the full cause of the changes, it may be a visible indication of other processes, such as subsurface ice melt, that also affect terminus retreat, Moon said.

It’s important to recognize that the mechanisms driving seasonal glacier changes—in northwestern Greenland and around the world—are not necessarily the same ones driving longer-term trends, Moon said. Knowing the differences may help researchers better anticipate the impact of anomalously low sea ice years, for example.

“We do know we’re going to see sea ice reduction in this area, and it’s possible we can begin to estimate how that may affect glacier velocities,” Moon said. It’s also possible, she said, that researchers and communities interested in long-term glacial changes—the kind that affect sea levels—may not need to focus as much on seasonal advance and retreat of the rivers of ice.

“It may be that we need to instead pay more attention to these out-of-bounds events, these anomalous years of very low sea ice or very high melt that likely have the greatest influence on longer-term trends.”

This research was funded by NASA and the National Science Foundation.

The American Geophysical Union is dedicated to advancing the Earth and space sciences for the benefit of humanity through its scholarly publications, conferences, and outreach programs. AGU is a not-for-profit, professional, scientific organization representing more than 60,000 members in 139 countries. Join the conversation on Facebook, Twitter, YouTube, and our other social media channels.

Notes for Journalists
Journalists and public information officers (PIOs) of educational and scientific institutions who have registered with AGU can download a PDF copy of the article by clicking on this link: http://onlinelibrary.wiley.com/doi/10.1002/2015JF003494/full?campaign=wlytk-41855.5282060185

Or, you may order a copy of the final paper by emailing your request to Nanci Bompey at nbompey@agu.org. Please provide your name, the name of your publication, and your phone number.

Neither the papers nor this press release is under embargo.
Title
“Seasonal to multiyear variability of glacier surface velocity, terminus position, and sea ice/ice mélange in northwest Greenland”

Contact Information for the Authors:
Twila Moon: twila.moon@nsidc.org (Dr. Moon is in Greenland this week, available by email and by Skype)