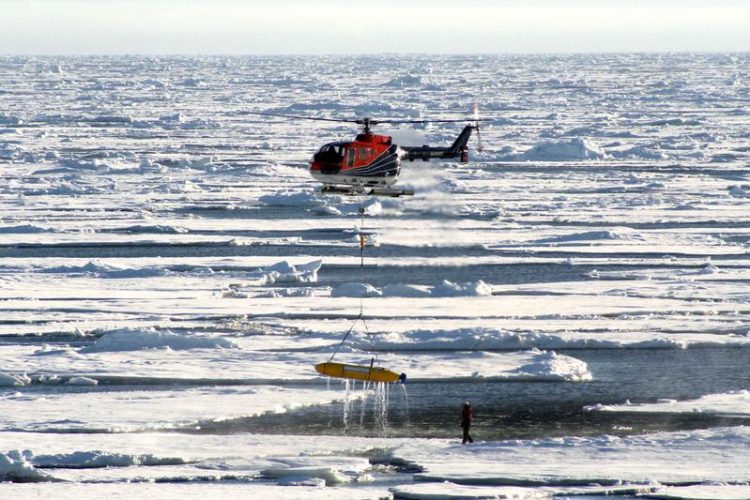 Scientists from the Alfred Wegener Institute, Helmholtz Centre for Polar and Marine Research (AWI) are setting out with the research vessel Polarstern towards Spitsbergen, to use newly developed equipment in the Arctic Ocean.

Autonomous instruments on the seabed, in the water column and in the air will complement the long-term measurements of the deep-sea research group. In this way researchers can analyse the climatic changes in the Arctic and their impact on the fauna in the future with higher temporal and spatial resolution.

For the first time the Autonomous Underwater Vehicle (AUV) “Tramper” will be set on its own for a year on the Arctic seabed. “The newly developed device is to measure oxygen along the depth gradients on a weekly basis. In this way we want to quantify how the sediment-dwelling marine organisms remineralize the biomass on the sea floor,” explains Dr Thomas Soltwedel, deep-sea ecologist at the AWI and chief scientist of the expedition.

The scientists want to close a knowledge gap: How are climate-induced changes in the productivity by algae on the water surface as well as in and under the sea ice temporally coupled to the export of nutrients in the deep-sea? And how are the deep-water organisms reacting to the presumably strong variability in food availability?

Above the Tramper working on the deep-sea floor, a further mobile measuring instrument is to be used: The autonomous underwater vehicle AUV named PAUL floats on a pre-programmed course through the water column, takes samples and simultaneously detects a wide range of environmental factors.

Equipped as a small laboratory, PAUL measures the water temperature, salinity, the concentration of nitrate, chlorophyll a and oxygen, as well as various organic substances and the intensity of photosynthetically active radiation. Additionally, PAUL collects water samples, from which the scientists can filter and determine the micro-organisms of plankton. Using an additional built-in acoustic Doppler current metre (ADCP), the physical properties along the melt-water border on the edge of the ice of the Arctic Ocean are to be investigated.

In order to exactly understand the ice conditions above the profile of PAUL, they will use autonomous flying devices. The so-called UAV (Unmanned Aerial Vehicle) records the thickness of the snow cover in addition to the ice coverage. For example, it can then be determined to what extent sunlight as energy reaches the ocean under the ice. One of the UAV places GPS transmitters on the sea ice to record the ice drift. The observed data will be used to program the route of the autonomous underwater vehicle.

The newly developed devices complement the long-term measurements, which the Helmholtz-Manx Plank Joint Research Group for deep-sea technology and ecology have been performing for more than 15 years in the so-called AWI Hausgarten (which means house garden) between Spitsbergen and Greenland. Resources of the Helmholtz infrastructure measure FRAM (Frontiers in Arctic Marine Monitoring) have been used to improve and to expand the long-term studies at the AWI-Hausgarten

Before “Polarstern” sails into the Hausgarten, two Italian working groups are using the voyage to travel from Bremerhaven to the North for their research. South of Spitsbergen, the geodynamic and hydrographic conditions and the gas leaks at the bottom of the Kveithola Trench are the focus of the research program. Another focus is on the exploration of spatial and temporal changes in the deep ocean currents southwest of Spitsbergen. Both projects are being carried out in the frame of the EU Eurofleets programme.

RV Polarstern will leave Bremerhaven on Monday, the 13th June 2016 with the high-tide in the evening at 7 pm. A large part of the nearly 50 participants of the scientific expedition participants will be debarking on June 23 during a short stopover in Longyearbyen, Spitsbergen. Here the deep-sea researchers embark and work on board until their expedition ends on 16th July in the Norwegian Tromsø. Then “Polarstern” focusing on oceanography takes course towards Greenland, where the interactions between the ocean and a glacier at 79 degrees North are to be examined. The last Arctic expedition in 2016 takes place in the Central Arctic, before the research vessel is expected to return to its homeport of Bremerhaven at the end of October.

Printable images are available in the online version of this press release: http://www.awi.de/nc/en/about-us/service/press.html