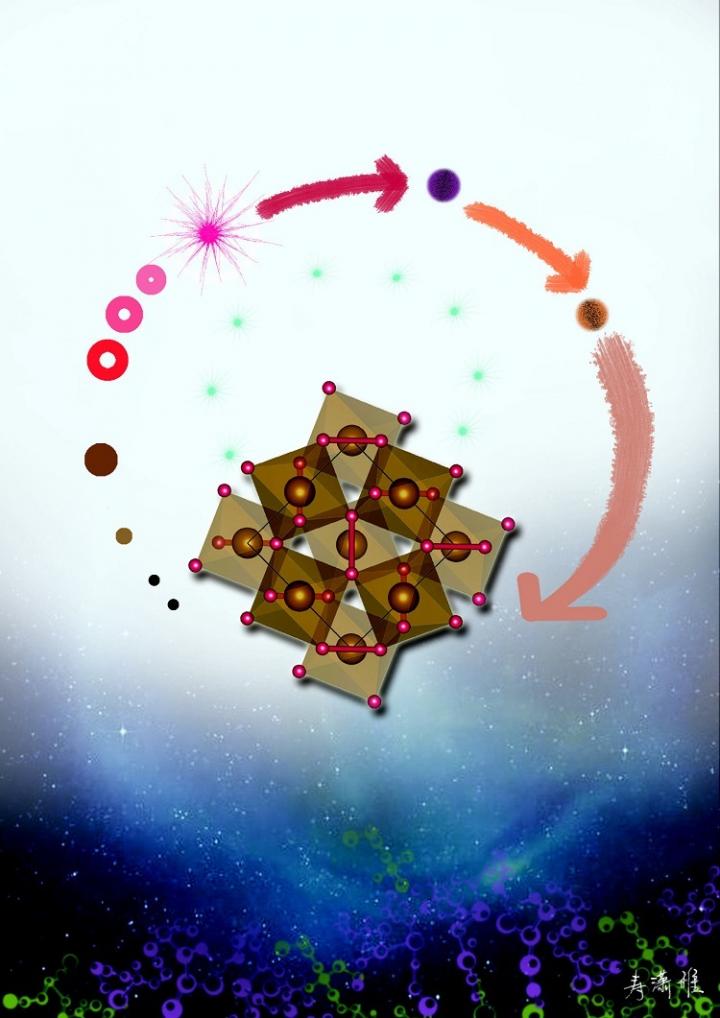 An artwork depicting the decomposition of FeOOH in lower mantle conditions. The cycle starts from α-FeOOH (blue dot on the top) to its high-pressure form (brown dot), to FeO2 (center crystal) and hydrogen (cyan bubbles), and finally produce other minerals (bubbles on the left side). Courtesy of Ms. Xiaoya

Iron and oxygen are two of the most geochemically important elements on Earth. The core is rich in iron and the atmosphere is rich in oxygen, and between them is the entire range of pressures and temperatures on the planet.

“Interactions between oxygen and iron dictate Earth's formation, differentiation–or the separation of the core and mantle–and the evolution of our atmosphere, so naturally we were curious to probe how such reactions would change under the high-pressure conditions of the deep Earth,” said Mao.

The research team–Qingyang Hu, Duck Young Kim, Wenge Yang, Liuxiang Yang, Yue Meng, Li Zhang, & Ho-Kwang Mao–put ordinary rust, or FeOOH, under about 900,000 times normal atmospheric pressure and at about 3200 degrees Fahrenheit and were able to synthesize a form of iron oxide, FeO2, that structurally resembles pyrite, also known as fool's gold. The reaction gave off hydrogen in the form of H2.

FeOOH is found in iron ore deposits that exist in bogs, so it could easily move into the deep Earth at plate tectonic boundaries, as could samples of ferric oxide, Fe2O3, which along with water will also form the pyrite-like iron oxide under deep lower mantle conditions.

Why does this interest the researchers? For one thing, this type of reaction could have started in Earth's infancy, and understanding it could inform theories of our own planet's evolution, as well as its current geochemistry.

Furthermore, the H2 released in this reaction would work its way upward, possibly reacting with other materials on its way. Meanwhile, the iron oxide would settle planet's depths and form reservoirs of oxygen there, particularly if one of these patches of iron oxide moved upward along the pressure gradient to the middle part of the mantle and separated into iron and O2.

“Pools of free oxygen under these conditions could create many reactions and chemical phases, which might be responsible for seismic and geochemical signatures of the deep Earth,” Mao explained.

“Our experiments mimicking mantle conditions demonstrate that more research is needed on this pyrite-like phase of iron oxide.” Hu added.

The research team believes their findings could even offer an alternate explanation for the Great Oxygenation Event that changed Earth's atmosphere between 2 and 2.5 billion years ago. The rise of bacteria performing photosynthesis, which releases oxygen as a byproduct, is often considered the source of the rapid increase in atmospheric oxygen, which had previously been scarce. But releases of oxygen from upwelling of deep mantle FeO2 patches could provide an abiotic explanation for the phenomenon, they say.

Researchers were supported by the NSF and the National Natural Science Foundation of China.

Measurements were performed at the High Pressure Collaborative Access Team, Advanced Photon Source, Argonne National Laboratory, and the BL15U1 beamline, Shanghai Synchrotron Radiation Facility in China. Parts of the experiments were performed at the 13BM-C experimental station of the GeoSoilEnviroCARS facility at the APS. HPCAT operations are supported by the DOE-NNSA and by the DOE-BES, with partial instrumentation funding by the NSF. 13BM-C operation is supported by COMPRES through the Partnership for Extreme Crystallography (PX2) project, under an NSF Cooperative Agreement. APS is supported by the DOE-BES.

The Carnegie Institution for Science is a private, nonprofit organization headquartered in Washington, D.C., with six research departments throughout the U.S. Since its founding in 1902, the Carnegie Institution has been a pioneering force in basic scientific research. Carnegie scientists are leaders in plant biology, developmental biology, astronomy, materials science, global ecology, and Earth and planetary science.