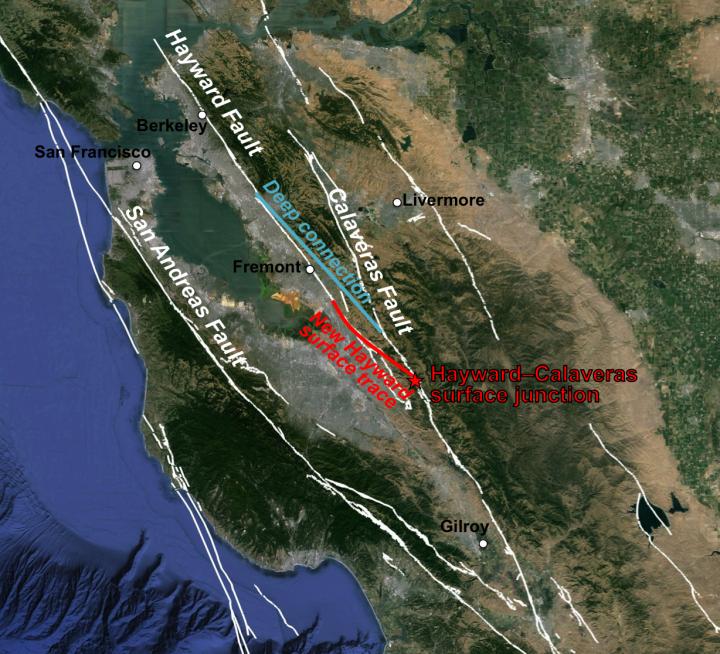 The Bay Area fault system and the spot (red star) where the Hayward Fault branches off from the Calaveras Fault. The white lines indicate faults recognized by the USGS. The red line is the newly discovered surface trace connecting the southern end of the Hayward Fault to the Calaveras Fault, once thought to be an independent system. The surface trace is offset by several kilometers from the deep portion of the fault 3-5 km below ground (blue line). Credit: Estelle Chaussard, UC Berkeley

University of California, Berkeley seismologists have proven that the Hayward Fault is essentially a branch of the Calaveras Fault that runs east of San Jose, which means that both could rupture together, resulting in a significantly more destructive earthquake than previously thought.

“The maximum earthquake on a fault is proportional to its length, so by having the two directly connected, we can have a rupture propagating across from one to the other, making a larger quake,” said lead researcher Estelle Chaussard, a postdoctoral fellow in the Berkeley Seismological Laboratory. “People have been looking for evidence of this for a long time, but only now do we have the data to prove it.”

The 70-kilometer-long Hayward Fault is already known as one of the most dangerous in the country because it runs through large population areas from its northern limit on San Pablo Bay at Richmond to its southern end south of Fremont.

In an update of seismic hazards last month, the U.S. Geological Survey estimated a 14.3 percent likelihood of a magnitude 6.7 or greater earthquake on the Hayward Fault in the next 30 years, and a 7.4 percent chance on the Calaveras Fault.

These are based on the assumption that the two faults are independent systems, and that the maximum quake on the Hayward Fault would be between magnitudes 6.9 and 7.0. Given that the Hayward and Calaveras faults are connected, the energy released in a simultaneous rupture could be 2.5 times greater, or a magnitude 7.3 quake.

“A rupture from Richmond to Gilroy would produce about a 7.3 magnitude quake, but it would be even greater if the rupture extended south to Hollister, where the Calaveras Fault meets the San Andreas Fault,” Chaussard said.

Chaussard and her colleagues, including Roland Bürgmann, a UC Berkeley professor of earth and planetary science, reported their findings today (April 2) in the journal Geophysical Research Letters.

Chaussard said there has always been ambiguity about whether the two faults are connected. The Hayward Fault ends just short of the Calaveras Fault, which runs about 123 kilometers from north of Danville south to Hollister in the Salinas Valley.

The UC Berkeley team used 19 years of satellite data to map ground deformation using interferometric synthetic aperture radar (InSAR) and measure creep along the southern end of the Hayward Fault, and found, surprisingly, that the creep didn't stop south of Fremont, the presumed southern end of the fault, but continued as far as the Calaveras Fault.

“We found that it continued on another 15 kilometers and that the trace merged with the trace of the Calaveras Fault,” she said. In addition, seismic data show that micro-earthquakes on these faults 3-5 kilometers underground also merge. “With this evidence from surface creep and seismicity, we can argue for a direct junction on the surface and at depth for the two faults.”

Both are strike-slip faults – the western side moves northward relative to the eastern side. The researchers found that the underground portion of the Hayward Fault meets the Calaveras Fault 10 kilometers farther north than where the creeping surface traces of both faults meet. This geometry implies that the Hayward Fault dips at an angle where it meets the Calaveras Fault.

Chaussard said that the many years of InSAR data, in particular from the European Space Agency's ERS and Envisat satellites from 1992 to 2011, were critical to connecting the two faults.

Creep, or the surface movement along a fault, is evidenced by offset curbs, streets and home foundations. It is normally determined by measuring points on opposite sides of a fault every few years, but that is hard to do along an entire fault or in difficult terrain. InSAR provides data over large areas even in vegetated terrains and outside of urban areas, and with the repeated measurements over many years InSAR can detect deformation with a precision of 2 millimeters per year.

“With InSAR, we have access to much larger spatial coverage,” said Chaussard, who has been expanding the use of InSAR to measure water resources and now ground deformation that occurs between earthquakes. “Instead of having a few points, we have over 200,000 points in the Bay Area. And we have access to areas we couldn't go to on the ground.”

“Creep is delaying the accumulation of stress needed to get to an earthquake, but it does not cancel the earthquake,” Chaussard said.

Other co-authors are seismologists Robert Nadeau, Taka'aki Taira and Ingrid Johanson, as well as graduate student Chris Johnson, all of UC Berkeley; and H. Fattahi of the University of Miami in Florida. The work was supported by NASA and the USGS.