Model to predict the angle of repose of sand hills developed 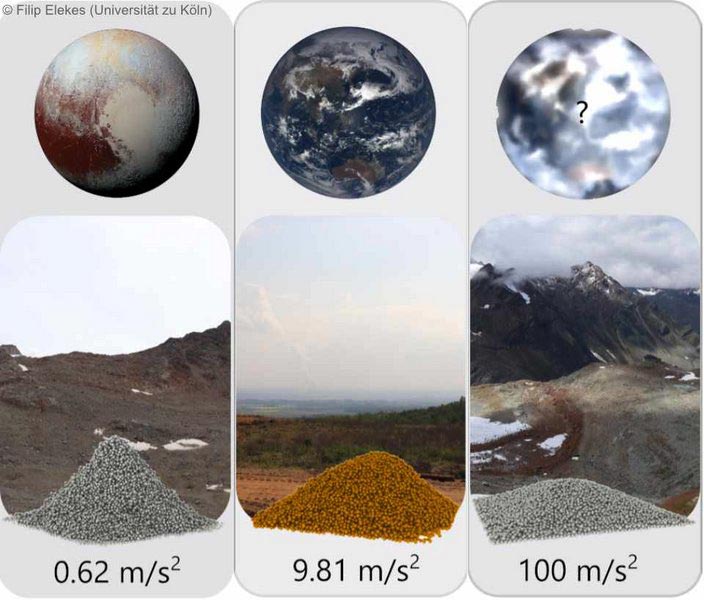 Geophysicists solve a key problem in physics and provide results that can be applied in such diverse areas as planetary research and 3-D printing / publication in ‘PNAS’.

The prediction of the angle of repose for raised mounds of dry cohesive granular material is a long-standing problem in the natural sciences and in industry. Using numerical (particle-based) simulations, geophysicists Dr Eric Parteli (until 2020 at the University of Cologne, now at the University of Duisburg-Essen) and Filip Elekes (University of Cologne) have developed a mathematical model that allows them to predict this angle, hence solving a long-standing problem.

Many people will remember playing in the sandbox as a child: If you let sand trickle down, it forms a sand cone that looks slightly different depending on the size of the sand grains. ‘In physics, what is most interesting in this regard is the angle of the cone created by the flowing sand – the so-called angle of repose,’ said Filip Elekes, first author of the paper now published in PNAS. ‘The angle of repose represents a measure of the flowability of the granules: The more flowable the granules, the smaller the angle of repose.’

The interplay of particle size, flow behaviour (angle of repose) and gravity (gravitational acceleration) is important for various industrial applications, such as additive manufacturing (e.g., 3-D printing). Understanding granular matter and powder systems is also becoming increasingly important in space and planetary science. ‘In the future, for example, components for space probes will be printed directly in the space station or even on the surface of the Moon or Mars,’ said Dr Parteli, who sees a wide range of potential applications.

For the right choice of particle size, the relationship described above must be understood quantitatively. ‘That’s where we come in. A mathematical model for the slope angle as a function of particle size and the respective gravitational acceleration would allow planetary scientists to infer, for example, the particle size of a planetary surface from the slopes of an extraterrestrial sedimentary landscape.’

To achieve such a model, the scientists used particle-based numerical simulations, also called discrete-element simulations, in their work. In such simulations, Newton’s equations of translation and rotation are solved numerically for each particle, taking into account a model for the forces acting on the particles. These forces are gravity, the contact or frictional forces between particles in contact with each other, and the rather weak electrostatic forces that always act between molecules and atoms (van der Waals interactions).