Is the Baltic Sea acidifying? 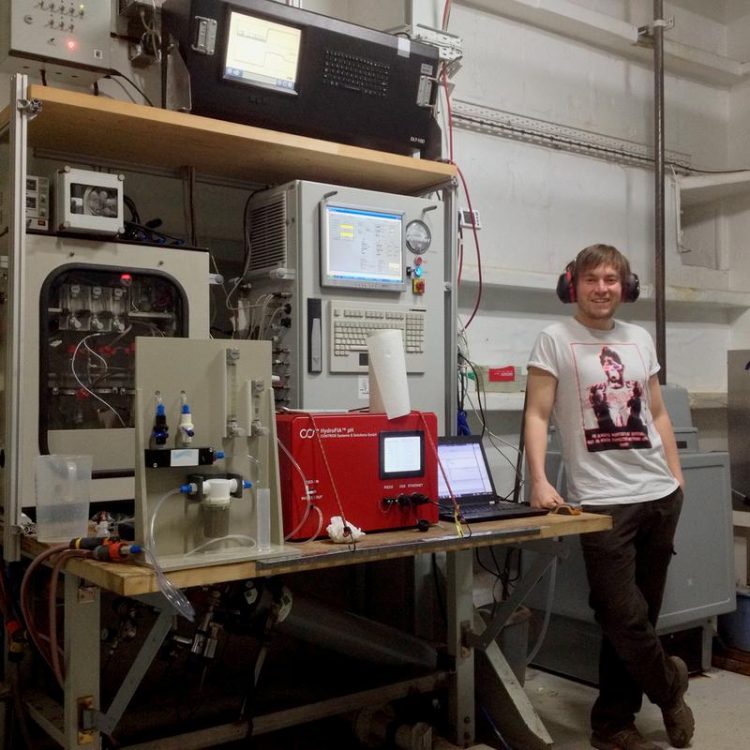 Great advancement for pH-monitoring in the Baltic Sea: For a better observation of possible acidification trends in brackish waters, Jens Müller, marine chemist at the Leibniz Institute for Baltic Sea Research Warnemünde, for the first time adapted a highly precise optical pH measurement method for the use at low salinities, which until now was only applicable at high salinity levels of the open ocean.

The newly adapted method, for which a market-ready device has already been designed, is therefore highly suitable for routine use within the framework of the Helsinki Commission's (HELCOM) Baltic Sea environmental monitoring. The work was carried out as part of the EU project BONUS PINBAL*.

Excessive anthropogenic CO₂ emissions are not only a problem for the global climate, but also for the oceans: Carbon dioxide dissolves in seawater, forms carbonic acid and thereby releases hydrogen ions, which leads to acidification. Since the beginning of industrialisation, the average pH of the oceans has dropped from 8.2 to around 8.1. Also known as “the other CO₂ problem”, this pH reduction affects almost all biogeochemical processes in the ocean. Mussels, crustaceans and corals, for example, react very sensitively because the formation of their calcareous shells and skeletons is impeded in an acidifying environment.

Although scientists started to investigate ocean acidification about two decades ago, it remains difficult to follow the current dynamics of the phenomenon: Long time series measurements in the open ocean show that the pH value decreases on average by about 0.002 units per year. To detect such small changes, highly accurate measurement methods are required. The optical pH measurement method was established as the de facto standard for this purpose. It is based on the addition of the dye m-cresol purple to the water sample and its pH-dependent colour shift from violet to yellow. The colour can be determined very precisely with a photometer and converted into pH units depending on ambient salinity and temperature.

And what about the Baltic Sea? “We have analysed data from the last 20 years and have not been able to detect a clear acidification trend – a rather remarkable result in view of the already proven acidification of the open ocean,” says Jens Müller from the Leibniz Institute for Baltic Sea Research Warnemünde (IOW), who has focused intensively on the CO₂ system of the Baltic Sea in his doctoral thesis. There are several possible reasons for the observed lack of acidification; the marine chemist points out two as particularly important ones: 1) The data quality is inadequate with regard to measurement precision. 2) There is, in fact, no decreasing pH trend, as acidification is buffered by counteracting processes.

That there are indeed processes in the Baltic Sea that counteract acidification, is evident from extensive analyses of alkalinity, i.e. the acid binding capacity of seawater. Alkalinity has been increasing in the Baltic Sea since 1995, probably due to continental rock weathering, the products of which are washed into the semi-enclosed sea. How long alkalinity will continue to rise and buffer acidification, however, is unknown.

“In order to understand what is happening in the Baltic Sea in terms of pH, it is important to rule out that the detection of acidification simply fails due to methodological shortcomings,” emphasises Jens Müller. Currently, the routine determination of pH in Baltic Sea monitoring is based on glass electrode measurements on individual water samples. The measurement uncertainty of this method is too large for a reliable detection of acidification trends in environments like the Baltic Sea.

Furthermore, Jens Müller stresses that monitoring should be carried out with the highest possible temporal and spatial resolution, using the most accurate method available to ensure that the observation of such a key parameter is always up to date. Müller: “We therefore have adapted the optical pH measurement method, which was previously only applicable at ocean salinities between 20 and 40, in such a way that it is ready for routine monitoring in brackish waters with a lower salinity of 5 to 20.”

To this end, Jens Müller, in cooperation with the Physikalisch-Technische Bundesanstalt (PTB), for the first time matched optical pH measurements in artificial seawater standards with pH measurements according to the primary electrochemical standard method, and systematically characterised the colour-shift behaviour of the indicator dye m-cresol purple for low salinities.

“With the aid of these data, we can now for the first time calibrate pH instruments for the low salinity range of the Baltic Sea and reliably convert the colour of the indicator dye into pH units,” explains Müller. In a final step, the IOW scientist was able to experimentally rule out the possibility that hydrogen sulphide and larger amounts of dissolved organic material, both common in brackish water ecosystems, could interfere with the newly adapted method.

To make the optical pH measurement method fit for the Baltic Sea not only on a chemical level, Jens Müller, together with a marine technology company and further scientific project partners, also developed a field-ready instrument that has already been tried and tested and is now on the market. “Our ‘Red Box’, which contains everything you need for spectrophotometric pH measurements, can easily be installed on any research vessel and can also be deployed autonomously on so-called ‘voluntary observing ships’ (VOS),” says Müller.

VOS are cargo ships that are not primarily used for research, but still carry instruments on board and collect scientific data. “Nothing stands in the way of a routine use of the adapted method for a much more precise, high-resolution and widespread pH monitoring in the Baltic Sea. We therefore are campaigning for it as an official new standard within the framework of HELCOM’s (Helsinki Commission for the Protection of the Baltic Sea) environmental monitoring”, concludes Gregor Rehder, head of the IOW working group “Trace Gas Biogeochemistry” and coordinator of the PINBAL project, on the research results of his former doctoral student and now colleague.

Original BONUS PINBAL* publications regarding the pH measurement in brackish water:
(*short for „Development of a spectrophotometric pH-measurement system for monitoring in the Baltic Sea“, for further information: http://www.bonusportal.org/pinbal)

IOW is a member of the Leibniz Association with currently 93 research institutes and scientific infrastructure facilities. The focus of the Leibniz Institutes ranges from natural, engineering and environmental sciences to economic, social and space sciences as well as to the humanities. The institutes are jointly financed at the state and national levels. The Leibniz Institutes employ a total of 19.100 people, of whom 9.900 are scientists. The total budget of the institutes is 1.9 billion Euros. http://www.leibniz-association.eu)