A look inside volcanic flows 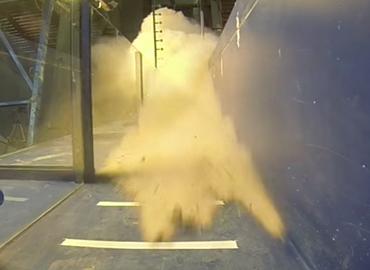 Researchers created their own flows with 3,500 pounds of volcanic ash Credit: Massey University

An empty boiler house and 1.5 tons of thick volcanic ash have given researchers at New Zealand's Massey University and Georgia Tech a look into the inner workings of pyroclastic flows in the largest-scale experiments of volcanic flows that have been conducted. They saw something they didn't expect.

In a paper published last week by Nature Geoscience, the team describes two separate transport areas that have been well-studied: a non-turbulent underflow and a fully turbulent, ash cloud region at the top of the flow. But volcanic flows apparently have a previously unrecognized third zone where the currents meet.

“Inside this middle zone, the gas-particle mixture behaved fundamentally differently from the turbulent suspension cloud above and the particle-rich avalanche of pumice below,” said Massey's Gert Lube. “These mesoscale turbulence clusters control how the internal structure and the damage potential of pyroclastic flows evolves during volcanic events.”

Pyroclastic flows, like the ones that covered Pompeii, are avalanches of fast-moving clouds of hot ash, rock and gas that are emitted during eruptions. They are responsible for 50 percent of volcanic fatalities every year.

“Our experiments allow us to better understand the physics of something we'll never see: the inside of an actual volcanic flow,” said Massey's Eric Breard, the lead author who will begin a postdoctoral fellowship at Georgia Tech in January. “By studying how quickly this mesoscale region grows, and how its dynamics change, it ultimately can tell us how dangerous the flows can be.”

To create and measure the flows, the team used Massey's one-of-a-kind eruption simulator. The team climbed a 12-meter tower in a repurposed boiler house and poured more than 3,500 pounds of pumice and ash down a 12-meter narrow chute. High-speed cameras recorded the flow while sensors captured the data.

“These experiments demonstrated that in the intermediate transition zone between the fully turbulent upper part of the flow and the underlying concentrated underflow, the energy from the largest scales of fluid motion is extracted by particles that almost exactly follow the fluid motion,” said co-author Josef Dufek, an associate professor at Georgia Tech. “This creates dendritic structures, or waves of particles, that slow the flow down, and provide the rate-limiting step for particles entering the underflow where they can cause the most damage.”

“This opens a new path toward reliable predictions of their motion, and will be particularly topical for hazard scientists and decision makers, because they will lead to major revisions of volcanic hazard forecasts and ultimately more effective measures for keeping people safe,” said Lube.