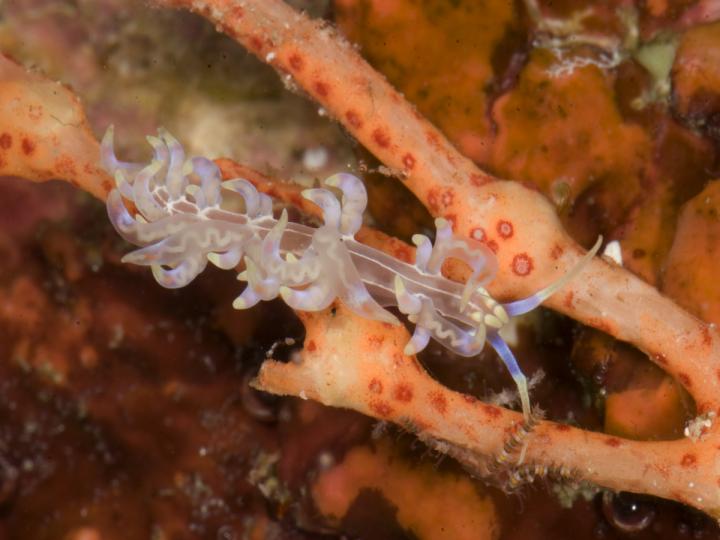 In 2014, researchers at the California Academy of Sciences added a whopping 221 new plant and animal species to our family tree, enriching our understanding of Earth's complex web of life and strengthening our ability to make informed conservation decisions.

Proving that there are still plenty of places to explore and things to discover on Earth, the scientists made their finds over five continents and two oceans, ventured into remote caves and descended to the bottom of the sea, looked in their owns backyards (California) and on the other side of the world (Africa). Their results, published in 64 different scientific papers, help advance the Academy's research into two of the most important scientific questions of our time: “How did life evolve?” and “How will it persist?”

“Biodiversity scientists estimate that we have discovered less than 10% of species on the planet,” says Dr. Meg Lowman, the Academy's Chief of Science and Sustainability. “Academy scientists tirelessly explore the unexplored regions of Earth–not only to discover new species, but also to uncover the importance of these species to the health of our natural systems. Our findings help to sustain the future of life for our children and grandchildren. Even in our own backyards,” she adds, “new discoveries abound!”

Scientists from the California Academy of Sciences discovered a new species of round-eared sengi, or elephant-shrew, in the remote deserts of southwestern Africa. It is the smallest known member of the 19 sengis in the order Macroscelidea. The team's discovery and description of the Etendeka round-eared sengi–Macroscelides micus–was published in the June issue of the Journal of Mammalogy.

While collecting and examining sengi specimens from southwestern Africa, Drs. Jack Dumbacher and Galen Rathbun found an unusual specimen they hadn't previously encountered. When preliminary genetic analysis showed important differences between this specimen and close relatives, the Academy scientists joined forces with an international team of experts to collect new wild specimens and compare their findings to existing museum collections worldwide. The collaborative research efforts–spanning several years and nine African expeditions–culminated in the confirmation of Macroscelides micus as a unique species.

Sengis are restricted to Africa and, despite their small size, are more closely related to elephants, sea cows, and aardvarks than they are to true shrews. Found in a remote area of Namibia, on the inland edge of the Namib Desert, scientists believe this new rust-colored species went undescribed for so long because of the challenges of doing scientific research in such an isolated area.

“With only about a dozen new species of mammal discovered in the wild each year, it is amazing that the Academy has been involved in describing three new sengis in the last decade,” says Rathbun, one of the world's foremost experts on sengis and an Academy Fellow and Research Associate. “There are new and exciting insights into biodiversity awaiting discovery, even in a group as familiar as mammals.”

An Etendeka round-eared sengi specimen is on display in the Namib Desert diorama exhibit in the Academy's African Hall, part of its natural history museum. For more information about sengis and their biology, visit http://www.sengis.org.

The Hero Ant of Madagascar

The island nation of Madagascar is a biodiversity hotspot teeming with wildlife found nowhere else on Earth. Academy entomologist and renowned ant expert Dr. Brian Fisher has worked in the critically threatened region for more than 20 years, training local leaders to protect their country's priceless natural resources before they are lost forever.

2014 was a banner year for scientific exploration in Madagascar and mainland Africa. Fisher and his research team found and described 110 new species of ants and 4 new genera, with several additional findings slated for publishing in the coming year.

One species stands out against the stunning backdrop of entomological treasures: Malagidris sofina, or, “the Hero Ant.” Armed with a host of special nest-building techniques and defense behaviors, the Hero Ant has adapted to its home (and threat of invaders) in fascinating ways. M. sofina lives in an environment with non-porous clay, and is thought to build a striking, funnel-like nest to promote oxygen exchange and protect its colony from suffocation.

While a heroic feat of insect engineering, this knack for nest architecture did not inspire the Hero moniker. Fisher and his colleagues painstakingly observed the species' bold defense against invaders–a behavior they call “cliff-jumping” in the journal Insectes Sociaux. As soon as a foreign ant approaches the funnel's entrance, a lone Hero Ant breaks from the colony and tackles the intruder, springing them both dramatically over the lip of the nest.

“Some arboreal ants have been observed taking to the air to avoid a predator, but no type of ant is known to sacrifice itself alongside an invader,” says Fisher. “This remarkable species is one of thousands threatened by slash-and-burn agriculture in Madagascar. The more we know about this critically diverse region, the more we can do to help protect it.”

The gigantic deepwater worm eel–Pylorobranchus hearstorum, the largest of its kind–caught its namesakes by surprise. Aquatic biologist Dr. John McCosker, Emeritus Curator, discovered a single female specimen in a treasure trove of Philippine marine biodiversity called the Verde Island Passage. William and Margaret Hearst sponsored the massive 2011 Academy expedition to the region, said to be the “center of the center” of fish diversity, and were surprised to hear that a new species had been named for them.

“Some might be less than thrilled to have a gigantic worm eel named in their honor, but the Hearsts were delighted,” says McCosker, acknowledging the Hearsts' commitment to ocean exploration in an era of great environmental change. “People don't think of eels as fish, but indeed they are! This discovery reminds us that there are many deep water creatures yet to be discovered, in the Philippines and beyond.”

The new eel is called gigantic for good reason; at nearly 50 inches from head to tail, it is almost twice as long and three times heavier than any known worm eel. Pylorobranchus hearstorum is related to snake eels–aptly named for their snake-like appearance–and probably lurks at depths close to 1,000 feet beneath the ocean's surface. McCosker's find is the only specimen of its kind, highlighting our need to learn more about unique deepwater habitats and the life that thrives so far from the sun.

The discovery of a new fossil relative of the megamouth shark came from a very different–and decidedly un-aquatic–habitat than that of the gigantic worm eel. Academy Research Associate Dr. Douglas Long calls the description of Megachasma applegatei, published in the March issue of the Journal of Vertebrate Paleontology, a discovery “decades in the making.”

Throughout the 1960's and 1970's, paleontologists digging in California's Central Valley uncovered small, prehistoric shark teeth that looked markedly different from others on record. Moving from 23-million year old marine sediment sites to local museum collections, the fossilized teeth sat relatively unnoticed until a U.S. Navy boat hauled up an extraordinarily rare megamouth shark–Megachasma pelagios–off the coast of Hawaii in 1976. Once a formal description was published in 1983, scientists speculated that the fossilized teeth belonged to an ancient relative of the filter-feeding megamouth shark.

Without a formal study on record, the shark mystery remained unsolved for five decades. Scientists noticed privately owned fossils of the supposed ancestor's teeth popping up on online auction sites, and decided it was time to take action.

Long and a team of passionate researchers analyzed 67 teeth–carefully preserved in museum collections–from sites in California and coastal Oregon, and placed M. applegatei in its proper place on the shark tree of life. Study findings revealed that the megamouth's lineage extends far earlier in history than previously imagined, converging with another group of ancient sharks called Odontaspids that persist in today's oceans in the form of sand tiger and gray nurse sharks. With stronger lineage information and teeth from ancient and existing sharks for comparison, scientists suggest that megamouth sharks evolved from sharp-toothed fish-eaters before evolving into the small-toothed filter-feeders they are today.

From islands to the mainland: three new spiders

The tropical forests and reef-filled waters of Southeast Asia are renowned for their unique plants and animals–and now, three newly discovered ray spiders. Arachnologist Dr. Charles Griswold, Emeritus Curator, wasn't terribly surprised to find tiny orb-weavers from the family Theridiosomatidae in the dark, wet forests of Malaysia and the Philippines, but notes that few researchers have formally documented the region's wild spiders. Well-known spiders abound in local rice paddies, but the new ray species–about the size of a single, chunky grain of sand–are wild mountain-dwellers.

To solve the problem of spotting such small spiders in the wild, researchers use “puffers” filled with fine cornstarch to seek out characteristic webs near waterfalls and damp rock structures. Named for their ray-like (and incredibly diverse) webs, these spiders have a neat trick for catching prey.

“Ray spiders aren't filter feeders,” says Griswold. “They tend to stretch their sticky webs into a cone-like shape, and hold on tightly while they wait for unsuspecting prey. Once spotted, they shake or let their webs fly out to catch a meal.”

Griswold and his research team found the new genus Tagalogonia (with two novel species) on dormant Philippine volcanoes. Another new species–from a genus previously described in China–was discovered in the forested hills of Malaysia. The latter is the first new ray spider described from Malaysia in more than a century, shedding more light on the region's stunning biodiversity.

About Research at the California Academy of Sciences

The Institute for Biodiversity Science and Sustainability at the California Academy of Sciences is at the forefront of efforts to understand two of the most important topics of our time: the nature and future of life on Earth. Based in San Francisco, the institute is home to more than 60 research scientists and aquarium biologists, as well as 45.6 million scientific specimens from around the world–nearly 40,000 of which are alive and on display in the Academy's Steinhart Aquarium. The institute also leverages the expertise and efforts of more than 100 international Research and Field Associates and 300 distinguished Fellows. Through expeditions around the globe, captive breeding programs, and investigations in the lab, the institute's scientists strive to understand the evolution and interconnectedness of life. Through these same efforts, as well as through partnerships, community outreach, and public engagement initiatives, the institute aims to guide critical conservation decisions and address the challenge of sustainability.