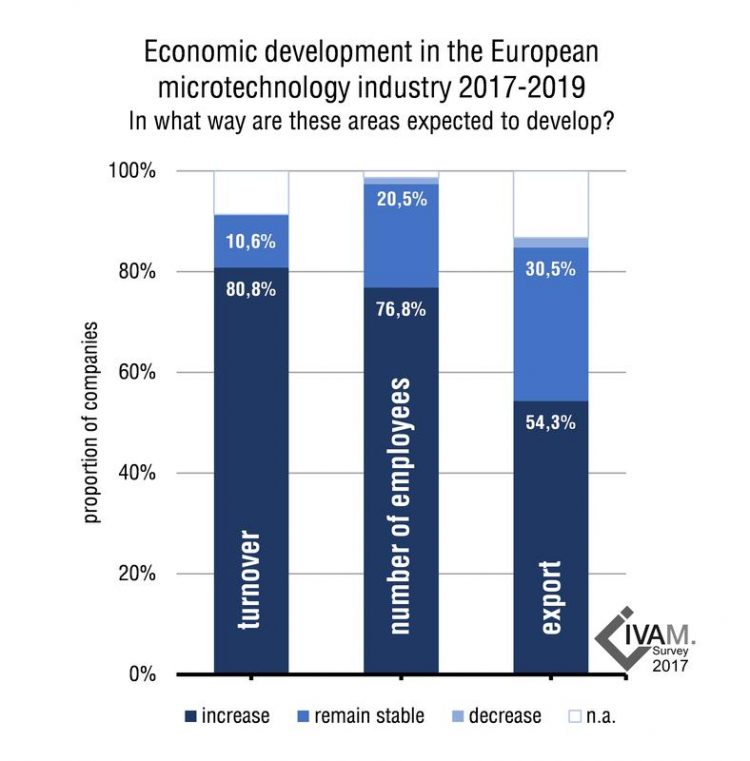 Increasing growth rates during the last four years are likely to have given rise to this optimism in the microtechnology industry: since 2013, the share of companies that have been able to increase their turnover and their number of employees has risen steadily. In 2016, more than half of the microtechnology companies achieved an increase in sales. Almost half of companies hired additional staff last year.

The export business of the European microtechnology industry will also continue to improve over the next three years. More than half of the companies expect that the share of turnover generated by exports will rise during this period.

The unstable economic growth in China, however, might slow down this development in favor of China is. Nearly 17 percent of the microtechnology companies regard this as an uncertainty for the development of their foreign business. Oppositely, the new protectionism in the US economic policy is a factor that might make the US market more difficult to access and give China a growing advantage. The walling-off of the US market enforced by the Trump government is an uncertainty for more than half of the European microtechnology companies.

The information has been collected by the IVAM Microtechnology Network in its annual economic data survey among microtechnology companies and research institutions throughout Europe.

About the IVAM Survey:

Once a year, the IVAM Microtechnology Network collects economic data among companies and research organizations that are active in the fields of microtechnology, MEMS, nanotechnology, advanced materials, optical and / or photonics technologies. In January and February 2017, 4,000 companies and research institutes in Europe have been asked about their economic situation and expectations, their major target markets and foreign markets, external and internal challenges, and the digital transformation. The participants are mostly from countries in Central, Western and Northern Europe.