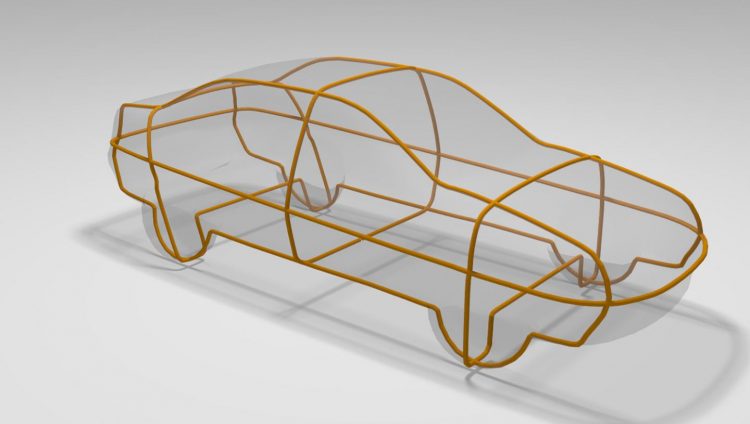 During the annual top conference of the Special Interest Group for Computer Graphics (SIGGRAPH) of the Association for Computing Machinery (ACM), which took place in Anaheim, USA, IST Austria Professor Bernd Bickel and his group present an algorithm that allows improved technical modelling of planar-rod structures consisting of interlocking wires.

After designing an aesthetically pleasing structure, e.g. a car or a duck, the contours of the objects are re-calculated with the new algorithm.

In this way, necessary adaptions of the structure and its connection points are computed to guarantee optimal stability of the object fabricated by the wire bending machine. The 2D structures are assembled to a 3D object without requiring additional connectors or soldering points.

“We were able to find a mathematical formulation for an exciting problem which allowed us to solve this problem in a second step. The software can be a useful tool for designers and engineers”, says Bernd Bickel concerning the recently developed algorithm.

The software implies applications to art on the one hand, but wire sculptures on the other hand present an extremely efficient and fast alternative for low-fidelity rapid prototyping due to the manufacturing time and required material scaling up linearly with the physical size of objects. The software allows a verification of function and stability resulting in the production of the optimal object only.

Bernd Bickel joined IST Austria as an Assistant Professor in 2015. Beforehand he obtained his Master's degree in Computer Science from ETH Zurich in 2006. For his PhD studies, he joined the group of Markus Gross, a full professor of Computer Science at ETH Zurich and the director of Disney Research Zurich. From 2010 to 2012 Bickel was visiting professor at TU Berlin and then became a research scientist and research group leader at Disney Research Zurich, where he investigated approaches for simulating, designing, and fabricating materials and objects. 2015 he received the Microsoft Visual Computing Award.

His research interest focuses on computer graphics and its overlap with animation, biomechanics, material science, and digital fabrication. His main objective is to push the boundaries of how digital content can be efficiently created, simulated, and reproduced using advanced 3D printing technology.

Together with other IST Austria Professors he launched the Visual Computing @ IST Austria platform to make this strong research focus at IST Austria more visible. Recent publications, description of current projects, and videos can be easily accessed. If interested, please visit http://visualcomputing.ist.ac.at