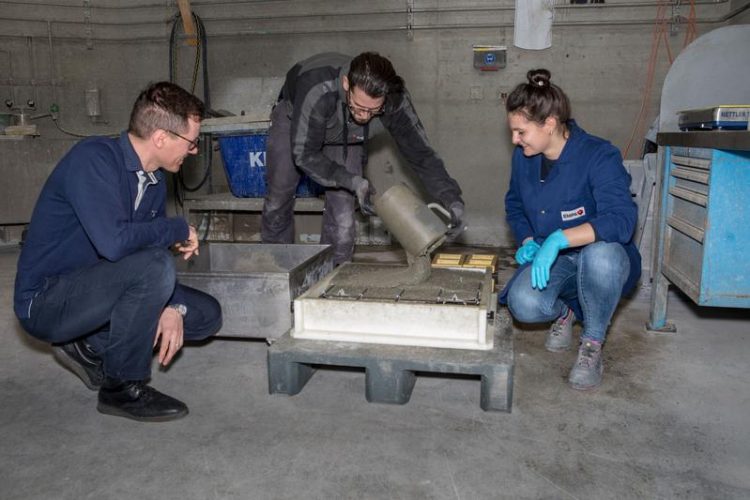 More than ten billion tonnes of concrete are produced and used worldwide every year. This is more than all other building materials combined. By way of comparison, steel and asphalt – both of which are also used very abundantly – are each produced at around 1.5 billion tonnes annually.

Even though the energy required to produce one tonne of concrete and the emissions that go with it are lower than for other building mate-rials, the huge quantities are responsible for a signiﬁcant environmental impact.

Cement, the binding agent in concrete, is the main culprit. Just under three percent of the world’s primary energy is used for the production of four billion tonnes of cement required annually. Cement production is also responsible for up to eight percent of the global CO2 emissions.

According to estimates, the annual production of concrete and cement could even increase by another 50 percent by 2050 due to a growing demand in developing countries. Replacing concrete is not an easy task, though; the building material simply offers too many advantages.

These ﬁgures show that a more sustainable use of concrete – from production and efﬁcient use of materials to demolition and recycling – will have an enormous impact on our environment and society.

Patents in Europe and the US

Empa scientists are looking into developing methods to make concrete elements leaner, yet durable and stable, so that materials consumption is reduced. A team led by Giovanni Terrasi, Pietro Lura and Mateusz Wyrzykowski was recently granted a European and a US patent for a self-pre-stressing concrete technology that achieve just this.

Pre-stressing is generally used when a concrete element has to withstand very high loads – for instance, beams, bridges or cantilevered structures. In a conventional pre-tensioning technology, the reinforcements or tendons – usually made of steel – are anchored on both sides of the element before the concrete is cast, put under tension and re leased again after the concrete has set.

The forces generated in the tendons place the concrete under compressive stress: The element is pulled together by the pre-tensioned reinforcement on its inside, so to speak – and is thus much more stable. The problem: Steel is susceptible to corrosion. Therefore, the concrete layer around the pre-stressing steel must have a certain thickness.

Carbon Fibres instead of Steel

As early as in the 1990s, carbon ﬁber-reinforced polymers (CFRP) were used to replace steel reinforcement. Because CFRP does not corrode, it is possible to produce signiﬁcantly leaner concrete components – with very similar structural properties.

“But if you want to pre-stress these CFRP reinforcements in order to be able to build even thinner structures with a higher load-bearing capacity, you reach your limits,” says Wyrzykowski. Very expensive pre-stressing beds are required and the anchoring of CFRP bars is much more complicated than that of steel. Thus, pre-stressed CFRP high-performance concrete is still not very widely used.

The Empa team has now succeeded in completely dispensing with anchoring on both sides of the concrete element, as the concrete does the work by itself: Thanks to a special formula, the concrete expands as it hardens. As a result of this expansion, the concrete puts the CFRP bars in its interior under tension and thus automatically pre-stresses itself.

“Our technology opens up completely new possibilities in lightweight construction,” says Wyrzykowski. “Not only can we build more stable structures, we also use considerably less material.” The Empa researcher also envisions completely new ﬁelds of application:

“We can easily pre-stress in several directions at the same time, for example for thin concrete slabs or ﬁligree curved concrete shells,” he says, looking to the future. These new applications are now being developed further in cooperation with industry partner BASF.