Home / Architecture and Construction / Simulations show how bridges are damaged during earthquakes
05.12.2022 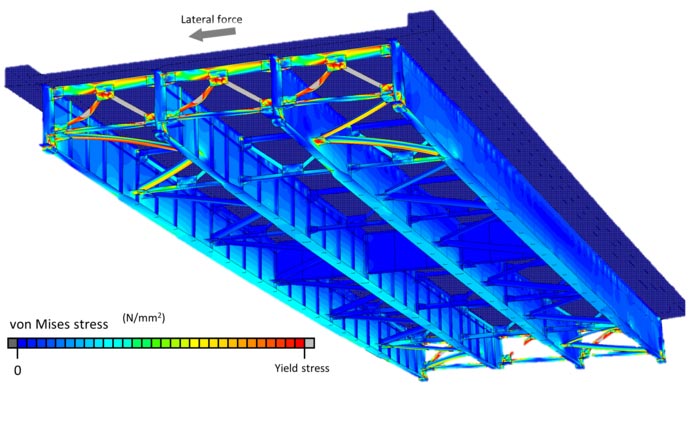 … and how we can prevent it.

Researchers from Tokyo Metropolitan University have carried out a detailed simulation showing how a common type of bridge fails during large-scale earthquakes. They modeled “I-shaped girder” bridges, looking at the step-by-step mechanism by which they yield and deform under lateral forces, starting at the ends. Reinforcing ribs were shown to be effective against lateral forces and improve load-bearing capacity. Their work points bridge engineers to rational design strategies to make more resilient infrastructure.

Major earthquakes can have a devastating impact on infrastructure. The effects of a severely damaged bridge, for example, are not limited to the tragedy that befalls people on it but extends to how the loss of access affects emergency services, evacuation efforts, and the transport of crucial supplies. Understanding how seismic activity impacts common bridge structures is therefore crucial, not only to build bridges that can withstand strong quakes, but how to prevent the failure of existing ones through effective reinforcement. Though numerical models exist which are used to assess the resilience of bridge superstructures, for the most part, there are very few examples which examine how each part of the whole bridge structure behaves during large-scale earthquakes.

A team led by Professor Jun Murakoshi of Tokyo Metropolitan University have been studying detailed models which accurately reflect the real behavior of entire structures, with a focus on how they might inform new design strategies. They looked at the failure process and impact on load-bearing capacity caused by lateral shaking of an “I-shaped girder” bridge, a common bridge type with a span length of 30m; supported steel girders shaped to have a cross-section that looks like a capital “I” carry a flat “deck slab” over which cars and people can pass. They subjected their model bridge to the lateral forces commonly seen during quakes, considering the response when the force was applied in the longitudinal and transverse directions to the girders.

The model revealed a detailed picture of how the bridge yields and deforms. For example, when the force was applied in the transverse direction, the first place to get affected was the lower part of the vertical stiffeners on the support, followed by yielding of the diagonal members of the end cross frame. The vertical stiffeners then go on to yield until finally, the gusset plate (a steel plate which connects lateral members) starts to deform. Though this does not lead to bridges failing, there are already reports of deformations impeding the passage of emergency vehicles after large-scale earthquakes.

The question now becomes how we might prevent this from happening. The team went on to study the effect of reinforcing ribs on the structure: a model with reinforcing ribs showed how stress acting on the girders and the end cross frame connecting them was reduced. The team’s work thus provides rational insight into how bridge structures may be designed and reinforced to make our infrastructure safer, as well as better strategies to assess their safety.

This work was supported by the Japan Iron and Steel Federation.