Unraveling the Genetics of Fusiform Rust 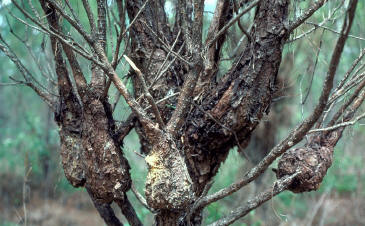 USDA Forest Service researchers at the Southern Institute of Forest Genetics (SIFG) in Saucier, MS are mapping genes in the pathogen that causes fusiform rust to provide future forest managers with more insurance against the damaging disease.

Fusiform rust, a fungus that forms spindle-shaped galls on the branches and stems of pine trees, is endemic to the southern U.S., occurring from Maryland to Florida and west to Texas and southern Arkansas. Attacking several southern pine species, the fungus is most damaging to loblolly and slash pines. Both the frequency and severity of the disease have increased dramatically over the last 50 years.

“In old-growth natural forests, pine and fusiform rust co-evolved without severely limiting one another,” said Tom Kubisiak, research geneticist at SIFG, a unit of the FS Southern Research Station. “In modern intensely managed plantations, planting limited numbers of the most highly productive families has actually contributed to an epidemic of fusiform rust.”

Trees less than 10 years old suffer the highest rates of mortality from fusiform rust, but galls from the disease also weaken and deform older trees, causing stems to break during high winds. Economic losses from fusiform rust are estimated at $28 million a year.

Pathologists and geneticists have concentrated on identifying and breeding resistant families of trees by inoculating seedlings with bulk collections of fungal spores harvested from a broad geographical area. The resulting trees are resistant to fusiform rust in a general sense, but they are not immune to the disease. Seemingly resistant trees can be infected when exposed to pathogens with new or different genes for virulence.

Research at SIFG and other laboratories has shown that the interaction between pine and fusiform rust largely fits the classical gene-for-gene model. According to this model, disease is not simply a character of the pine host, but rather a result of the interaction between specific genes (resistance genes) in the host and specific genes (avirulence/virulence genes) in the pathogen. Simply put, each gene for resistance in the pine corresponds to a gene for virulence or avirulence in the fusiform rust pathogen.

Collaborator Henry Amerson (North Carolina State University) has identified as many as eight different genes for resistance in pine families. At SIFG, research geneticists Dana Nelson and Tom Kubisiak are using DNA markers to locate the corresponding genes for avirulence and virulence in the fusiform rust pathogen. To develop the populations of the fungus they need to map the genes, SIFG researchers are crossing difference fungal genotypes, a painstaking process that can take months.

“Our hope is to identify DNA markers tightly associated with each of the corresponding avirulence/virulence genes in the pathogen,” said Kubisiak. “Then we can provide managers with an automated tool that directly estimates the frequency of these genes in natural populations of the fusiform rust pathogen. Managers can then use this information to determine which families of pines to plant in these areas.”

Researchers from the SRS Southern Institute of Forest Genetics (SIFG) are presenting findings from their work on fusiform rust disease at the Rustbusters 2003 symposium and at the 51st Western International Forest Disease Work Conference (WIFDWC), both held in Oregon the week of August 18th and sponsored by the USDA Forest Service.