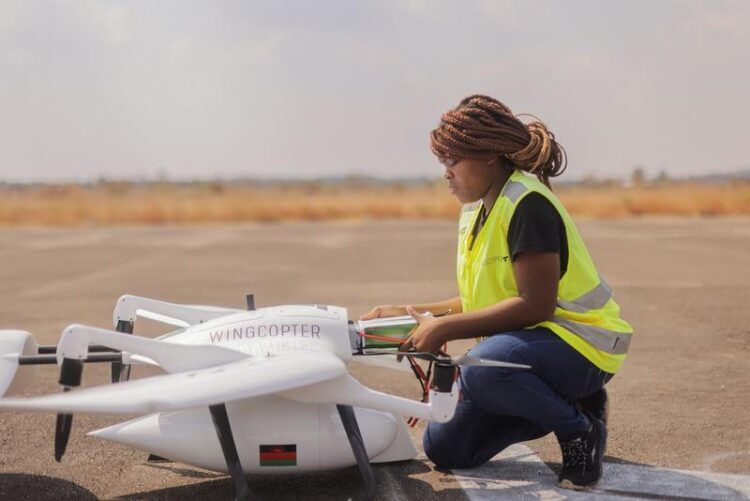 The Fraunhofer Heinrich Hertz Institute (HHI) and drone manufacturer Wingcopter have successfully deployed the SUCOM drone communication system on the African continent for the first time, specifically in Malawi. The mobile radio-based system enables safe control of drones, even despite being out of sight of the person controlling them. Wingcopter plans to expand the local delivery drone program into a permanent operation with additional local pilots by the planned completion of SUCOM testing in Malawi at the end of the year. The German Federal Ministry of Digital Affairs and Transport (BMVI) funds the SUCOM project with 1.15 million euros.

Rural areas in Malawi have poor infrastructure. There are often no roads between villages and larger towns. Especially in the rainy season, existing roads are impassable due to large amounts of mud or flooding. Given this situation, providing medical care to rural areas is almost impossible. Delivery drones can solve this logistical challenge and connect remote villages to medical care. As part of the “Drone & Data Aid” project, Wingcopter – in cooperation with the Deutsche Gesellschaft für Internationale Zusammenarbeit (GIZ) and UNICEF – has been transporting medicines by cargo drones from city hospitals to health stations in rural areas of Malawi. Moreover, laboratory samples have been delivered from the stations to the hospitals for almost a year. The SUCOM system helps provide more reliable care to these areas and significantly improve diagnosis and treatment options for patients.

Drones take off from a designated Wingcopter hub, always located near a major hospital. A loaded drone is launched remotely by pilots and monitored during flight time. The drone operates autonomously, but adjusting the flight trajectory is possible. With the SUCOM system, pilots can execute maneuvers even though they are far away from the drone’s actual location. Test flights have already been completed successfully in Malawi. In one scenario, for instance, the Wingcopter drone was remotely controlled from Berlin. The delay between pilot and drone communication amounted to less than 0.2 seconds over a distance of more than 7,000 km. In addition to the position and status information of the drone, a live video was transmitted.

During delivery flights, the drone is controlled and monitored by a so-called Control Unit Operator (CUO). The CUOs work closely with a Visual Observer at the destination. The latter unloads the drone’s cargo after landing and releases it for takeoff before the return flight proceeds.

The “Wireless Communication and Networks” department at Fraunhofer HHI developed a communication system for SUCOM based on modern 4G and 5G technology. The focus is on the use of multi-antenna systems and the optimization of the transmitted data streams. “In Malawi, we can test mobile communication systems for drones on long-range flights over rural regions. At the same time, we create real added value by helping to improve medical care in Malawi,” explains Tom Piechotta, project manager at Fraunhofer HHI.

“The population is responding enthusiastically to the project,” reports Carsten Ramke, an engineer at Wingcopter, who accompanied the tests on-site. “Positive feedback comes also from the local health facilities. Order volume and inquiries are continuously increasing. Good cooperation with the local population is very important to us. We visit new locations in person and organize information events where we demonstrate the drone and explain the medical delivery service.”

By flying many hours on different routes, the researchers gain valuable data concerning the reliability of the SUCOM system. Based on this data, they have already made specific improvements to the system. Furthermore, by applying the gained data sets and maintaining proven reliability, the SUCOM team lays the groundwork for future drone applications in Europe.