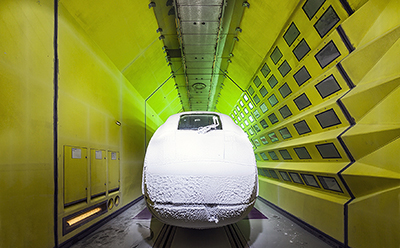 <b>The ICE 4 in the Climatic Wind Tunnel – Snow, ice, wind, rain and blazing sun</b> The new Intercity train from Siemens underwent a 12-week comprehensive testing program at Rail Tec Arsenal (RTA) in Vienna. Here, in the longest climatic wind tunnel in the world, the train had to prove that it can operate flawlessly at speeds up to 200 kilometers an hour, at temperatures ranging from minus 25 to plus 45 degrees Celsius, as well as in snow, ice rain or in blazing sun.

Rail customers expect to be served by trains that function perfectly from the very first day of service. This is particularly true for the new Intercity platform that will be operated by Deutsche Bahn (DB). Expected to account for around 70 percent of revenue, the ICE 4 will be the backbone of DB's future long-distance service.

Two ICE 4 trains will enter passenger service in the fall of 2016 as part of a twelve-month period of trial operations. Until then, the trains will be subjected to rigorous testing.

Before the first passengers board the train, however, the ICE 4 has to prove that it can operate even under the most extreme weather conditions, in blazing heat as well as freezing cold.

The tests, conducted at the Climatic Wind Tunnel operated by Rail Tec Arsenal (RTA) in Vienna, subject the train to conditions far more stringent than required by European norms.

In addition, tests check if the pantograph moves up and down and functions in ice and snow, if the windscreen wiper keeps the driver's vision free, if the doors open and close smoothly, the folding steps function and the toilets operate without problems.

In May 2011, Deutsche Bahn awarded Siemens a frame contract for up to 300 multiple-unit trains. The first series production trains will enter passenger service with the change of the timetable in December 2017. The trains are initially foreseen for service in Germany, Austria and Switzerland.