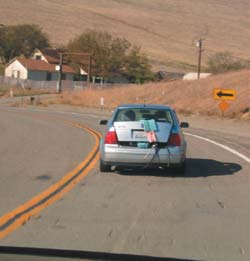 As it coasts down the Altamont Pass near Livermore, Calif., this Volkswagon Jetta’s vehicle and engine speed measurements are time-matched with LII measurements to obtain a synchronized data set correlating real-time particulate emissions. <br>Credits: Sandia

While on-board measurements of gaseous emissions are routine, real-time particulate measurements have been far more elusive, yet are essential for validating federal emissions guidelines for vehicle compliance.

Sandia, Artium Technologies and the NRC have worked together to develop the portable version of LII instrumentation that was successfully applied during this recent trial. Consequently, this new method may alter the way in which the automotive industry effectively gauges particulate emissions.

During the past decade, CRF and NRC researchers honed the LII technique, discovered in the 1970s, with the NRC securing an important temperature-measurement patent that is key to the current measurement capability.

The most notable result during the recent tests, said Witze, was obtained during the coasting descent. “Although the vehicle speed and engine rpm were reasonably steady for the period from 470 to 600 seconds, the particulate emissions suggest that fuel injection cycled on and off intermittently,” said Witze (see Figure 2). While the researchers believe the ideal fueling strategy would be to turn off injection for the entire descent, the vehicle is equipped with a catalyst that needs to be kept at its operating temperature.

The average particulate emissions measured by LII during this period were 8.4 ppb, as compared to 10-11 ppb during steady-state idle. This suggests that the engine control module has been programmed to minimize fuel consumption during a descent while maintaining idle-like particulate emission levels and an active catalyst.

The ability to measure on-board particulate tailpipe emissions is of growing environmental interest because of the desire to validate current U.S. Environmental Protection Agency (EPA) vehicle certification procedures. These procedures, which have been the industry standard for more than 30 years, measure emissions using a chassis dynamometer and specify engine speed to be applied during testing. Because such tests do not replicate variables such as grade changes and weather encountered under actual driving conditions, the automotive industry expects dynamometer emissions testing to be supplemented with on-road measurements in the future.

In conducting the tests, Artium’s commercially available LII instrument and ancillary equipment were placed in the trunk and on one side of the rear seat of a 2002 Volkswagen Jetta with automatic transmission and a turbocharged direct-injection (TDI) diesel engine. An on-board diagnostics (OBD) scan tool interface was used to access the vehicle and engine speeds for recording while the vehicle was driven on a test route in the Bay Area’s Livermore Valley in northern California.

These measurements were then time-matched with the LII measurements to obtain a synchronized data set correlating time-resolved particulate emissions with a variety of vehicle operating conditions that included city driving, freeway driving with entrance-acceleration and hill ascent, and coasting descent on a rural road.

Sandia’s Witze said another unique aspect of the LII measurement technique is that, unlike other systems, it does not require an operator in order to conduct the tests. For this and other reasons, he said engine manufacturers have proven to be “extremely interested” in LII.

Witze will speak on the topic of on-board particulate emissions at the Coordinating Research Council’s (CRC) 14th On-Road Vehicle Emissions Workshop on March 29 in San Diego. More information on that event is available at http://www.crcao.com/